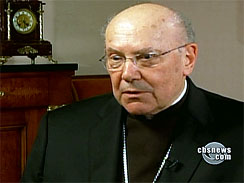 “There is no way of predicting that but I wouldn’t be surprised,” Quijano said in an interview Monday with PBS’ “NewsHour.”

The interviewer, Margaret Warner, asked if there was a new standard for bishops to meet in the way they handle clergy abuse cases.

“I think the standard is not new but it’s being applied more rigorously than in the past,” Levada said.

Levada, who once served as an archbishop in Oregon and California now holds the office previously held by the Pope. He called the crisis particularly grave.

“This is anything but being a good shepherd when you abuse children and you violate their innocence. This is a crisis, if you will, that I think caught most of us by surprise,” Levada said. “One bishop told me ‘This isn’t the cruise I signed up for,’ but that’s in fact what has happened.”