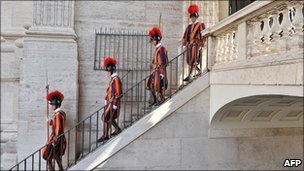 The Vatican has been shaken by a series of abuse scandals

The Vatican has issued new instructions to speed up the handling of the “most urgent” cases of sex abuse by priests, after a series of abuse scandals.

Priests who sexually abuse a mentally ill adult will now be treated in the same way as those who abuse minors.

The rules also extend the time in which the Church can take action against anyone who abused a minor from 10 to 20 years after a victim’s 18th birthday.

The new 20-year limit will continue to be extended on a case-by-case basis, the Vatican said.

Existing Vatican guidance to bishops that they should report sexual abusers to civil authorities remain in effect.

The Church’s internal justice system for dealing with abuse allegations has come under attack because of claims by victims that their accusations were long ignored.

The new norms also formally rule that child pornography is a crime against Church law.

The document also listed the attempted ordination of a woman as a “grave crime” to be handled by the Vatican’s Congregation for the Doctrine of the Faith, just as sex abuse is.

Monsignor Charles Scicluna, the Vatican’s sex crimes prosecutor, said that including the two issues in the same document was not equating them, but was done to codify the most serious canonical crimes which the Roman Catholic Church handles.

“They are grave, but on different levels,” he told the Associated Press at a briefing on Thursday.