‘I find it beyond belief that they could … not know who the perpetrators are,’ says survivor

Father Hans Zollner, organizer of the Vatican sex abuse summit and member of the Pontifical Commission for the Protection of Minors, says he doesn’t know the names of abusers in cases described by survivors. (Gregorio Borgia/Associated Press)

A dramatic feature of the sex abuse summit now underway at the Vatican has been the testimony of eight victims from around the world anonymously recounting their experience of abuse.

But the Vatican has no idea of if the victims’ abusers are still active as priests, a main organizer of the summit told CBC News.

Father Hans Zollner told CBC that none of the people who gave testimony at the four-day conference told the Vatican who their abusers were or where their cases had been dealt with.

When asked if the Vatican had looked into whether the priests accused by the victims are still in active ministry, Zollner, a member of the Pontifical Commission for the Protection of Minors and president of the Center for the Protection of Minors at the Pontifical Gregorian University, said: “No, they [the victims] have not disclosed it to me and my understanding is that maybe they don’t know [if the priests are still active in the Church]. But I can’t say because I don’t know it.”

Zollner said all but one of the victims the Vatican chose to provide testimony to a closed-door room of bishops wanted to protect their anonymity.

When CBC sent a text message later asking Zollner if he wanted to further comment on his statement that the Vatican had not verified the victims’ accounts since none had identified an abuser to the Vatican, he responded that was “not accurate.”

When asked to be more specific, his answers were vague.

He said the victims he was in contact with “did not disclose where their proceedings are,” adding that the victims were “verified by the people on the ground who had first contact with them.”

When asked what that meant, he did not respond.

Marie Collins, an Irish sexual abuse survivor and former member of the Pontifical Commission for Protection of Minors, says the fact that the Vatican does not know if the predatory priests of these eight victims are still active in the Catholic Church undermines the credibility of the whole event. 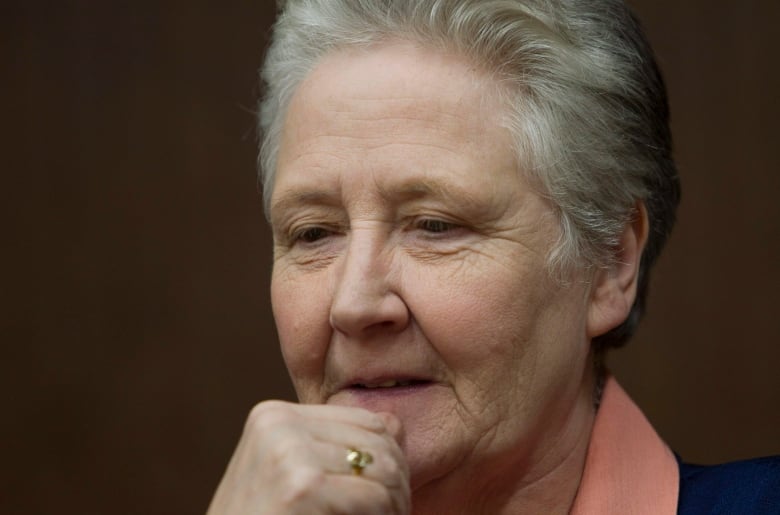 Marie Collins, an Irish sexual abuse survivor, is pictured in 2012. She questions the credibility of the church if it does not know if the abusive priests are still in ministry. (Andrew Medichini/Associated Press)

“I find it beyond belief that they could put forward eight survivors and not know who the perpetrators are,” said Collins.

“It’s not that I’m doubting any of these people. From what I’ve heard, it sounds like they are genuine survivors,” said Collins. “But I’m just totally thrown at the idea that the Vatican would present eight survivors to a conference at this level and not have taken any interest whether their abusers have been removed from ministry or the church or in any way sanctioned. It’s mind-boggling.”

Survivors’ groups have been critical of the way in which the Vatican selected sexual abuse victims to testify at the conference, which has as its theme bringing responsibility, accountability and transparency to how the Catholic Church and its bishops around the world deal with sexual abuse of children by priests.

Pope Francis called the unprecedented meeting of some 200 top bishops, Vatican officials and a small number of nuns to help the church hierarchy confront what he has called the scourge of sexual abuse by the clergy.

Sex abuse survivors and members of the group Ending Clergy Abuse hold a wooden cross as they march in downtown Rome on Saturday. (Alessandra Tarantino/Associated Press)

Survivors who have gathered outside the conference in Rome this week have called the Vatican’s process of selecting victims to testify of their abuse secretive. They’ve asked why the Vatican presented most survivors in recorded form rather than in person and why organizers chose only people who wished to remain anonymous to recount their abuse by priests.

Marie Collins added she is also concerned about the mental and emotional health of the people the Vatican chose to provide video testimony of their assaults.

“If victims are at the point in their coming to terms with their abuse that they’re still unable to name their perpetrator, then in no way should they be asked to do something like this,” she said.

When asked by CBC if all the priests accused by the Vatican’s selected victims had been permanently removed from active ministry in the Catholic Church, another organizer of the bishops’ summit, Archbishop of Malta Charles Scicluna, a former top prosecutor for sex abuse at the Vatican, said, “I do not have that information.”

“I will try to find out because that’s a very important point,” he said. “But I don’t know.”

He said Zollner was the one who contacted and selected the victims who provided testimony for the first three days of the meetings that ended late Saturday.