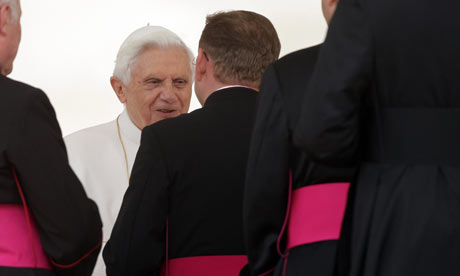 The Vatican was forced into a climbdown after remarks by a senior cardinal linking homosexuality with paedophilia caused an international outcry.

The French foreign ministry protested at the “unacceptable linkage” which Cardinal Tarcisio Bertone had made between sexual orientation and child sex abuse. A forceful statement by British bishops distancing themselves from the remarks added to the pressure.

Gay rights campaigners and victim support groups also denounced Bertone, who is the second most important figure in the Holy See, for his comments, made during a televised press conference in Santiago, Chile, on Monday.

In an attempt to defuse the row, and embarrassed by the fresh ignominy of an outspoken cleric, the Vatican attempted to draw the sting from the cardinal’s remarks, while suggesting that the link he had made between homosexuality and paedophilia was valid for sex abuse by clerics.

The papal spokesman, Father Federico Lombardi, said that church authorities did not regard themselves as competent to make statements “of a specifically psychological or medical nature”. But, answering questions from journalists, he pointed to figures cited by the Vatican official in charge of investigating abuse cases.

In an interview last month with the church-owned daily Avvenire, Monsignor Charles Scicluna said nine out of every 10 cases dealt with in recent years had not involved paedophilia in the strict sense, but ephebophilia (relations with mid-to-late adolescents). Of these, two-thirds concerned relations with boys and one-third relations with girls.

“What is being referred to here is obviously the issue of abuse by priests and not in the population at large,” Lombardi told the press.

A more explicit rebuttal came from Catholic bishops in England and Wales, who moved quickly to reject Bertone’s assertions.

A statement from the Rev Fr Marcus Stock, general secretary to the Catholic Bishops’ Conference of England and Wales, said there was no empirical data to conclude that paedophilia had anything to do with homosexuality. His statement bears the authority and approval of all 32 Catholic bishops in England and Wales.

He said: “To the best of my knowledge, there is no empirical data which concludes that sexual orientation is connected to child sexual abuse.

“The consensus among researchers is that the sexual abuse of children is not a question of sexual orientation, whether heterosexual or homosexual, but of a disordered attraction or fixation. Many abusers of children have never developed the capacity for mature adult relationships.”

The statement represents a concerted effort by Catholic clergy to distance themselves from increasingly erratic pronouncements from the Vatican on who or what is to blame for priestly paedophilia.

It also exposes the tension between the Vatican, which is often seen as out of touch with the world around it, and local churches, which are seen as being more aware of contemporary social sensibilities and attitudes.