The chairman of the Vatican Bank is under investigation for possible money laundering violations, and Italian police have seized EUR23 million in deposits as a precautionary measure, Ansa news agency reported Tuesday. 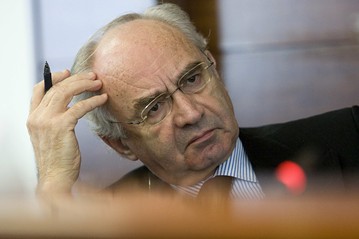 Remo Casilli/Reuters
Gotti Tedeschi has been placed under investigation by Rome magistrates for suspected money-laundering by the bank, Ansa news agency reported.

The wire service, citing unnamed police, said authorities are looking at whether Ettore Gotti Tedeschi broke a 2007 law regarding the disclosure of account holder identities. Ansa reported that another executive of Istituto per le Opere di Religione, as the bank is formally known, is also under investigation, without naming them.

The Vatican said in a statement that it was “perplexed and astonished” after the EUR23 million was impounded, AFP reported.

The Holy see pledged its commitment to financial transparency and expressed “maximum confidence” in Tedeschi, a former official of Spanish banking giant Santander whose 2009 appointment was seen as a move towards greater transparency at the IOR.

The EUR23 million ($30 million) is held in the Vatican Bank’s account at the Credito Artigiano SpA, a private bank that is part of the Credito Valtellinese group.

On Sept. 15, The Bank of Italy’s financial intelligence unit flagged two transactions ordered by the IOR from its account with Credito Artigiano because they were deemed suspicious, according to Ansa.

The IOR is considered a non-European Union bank and enjoys Vatican offshore status. The bank manages accounts for religious orders and Catholic associations.

It had been previously reported that investigators were probing one or more accounts the Vatican Bank opened with Unicredit, Italy’s biggest bank.

ROME — Italian monetary authorities said Tuesday that they had impounded $30 million from the Vatican bank and placed its top two officers under investigation in connection with a money laundering inquiry. The announcement amounted to another potential storm confronting the papacy of Benedict XVI, who is struggling with the effects of a priestly abuse scandal.

In a statement, the Vatican expressed “perplexity and surprise” that the bank’s chairman, Ettore Gotti Tedeschi, and its director general, Paolo Cipriani, had been placed under investigation. It added that it had the “greatest trust” in the two men and had been working for greater transparency in its finances.

The investigation is the first into the Vatican bank since the early 1980’s, when it was implicated in the collapse of an Italian bank whose director, nicknamed “God’s banker,” was mysteriously found dead, hanging from Blackfriars Bridge in London.

Italian authorities have historically shied away from investigating the Vatican’s finances — as much out of deference to the church as owing to the complex relationship between Italy and the Holy See, a sovereign state.

“The era of omertà is over,” said Gianluigi Nuzzi, the author of the 2009 bestseller “Vaticano S.P.A.,” using the Italian term for the code of silence. S.P.A. stands for limited liability corporation in Italian.

The investigation was undertaken because of a new directive by the Bank of Italy. Aimed at preventing financing of terrorist groups and money laundering, it now requires all foreign banks operating in Italy — including the Vatican Bank — to provide detailed information about the origins of the money it transfers.

Officials said that Mr. Gotti Tedeschi and Mr. Cipriani were under investigation for having failed adequately to explain the origins of funds transferred from one account held by the Vatican Bank to two others it holds. They said the seizure was preventive and neither man had been formally charged or placed under arrest. In the coming months, a judge is expected to rule on whether to proceed with the investigation.

The investigation could potentially blight the record of Mr. Gotti Tedeschi, a well-respected banker and a former head of operations in Italy for Spain’s Banco Santander who was brought in by the pope last year to help clean up the murky finances of the Vatican bank, a private bank formally known as the Institute for Works of Religion, or IOR, which manages funds aimed at charitable activities.

The new investigation appeared more mundane but no less explosive.

Officials said they had opened the investigation on Monday after the Bank of Italy, adhering to anti-money-laundering directives, alerted them to two suspicious transfers on Sept. 6 from an account held by the Vatican bank at a Rome branch of Credito Artigiano S.P.A., a bank based in Northern Italy.

Under Italian law, magistrates are required to open an investigation if there is a suspicion that a crime may have been committed. Magistrates in Rome opened the investigation because the accounts in question were in bank branches in Rome.

News reports last year said that the same magistrates had opened up a broader investigation last year into bank accounts held by Vatican officials and charitable entities in Rome banks.

In both cases, investigators bypassed the sovereignty of the Holy See by looking into Italian accounts that had received funds from the Vatican Bank.

In a statement, the Holy See said it expressed “perplexity and surprise at the initiative taken by the Rome court, considering that all the necessary data were already made available to the competent office at the Bank of Italy and similar operations are ongoing with other Italian credit institutions.”

It added that the funds were transfers originating within the Vatican bank itself, and that the bank was working to join the “white list” of the Organization for Economic Cooperation and Development, the highest ranking on its transparency charts.

The new investigation appeared to show a more aggressive stance by the Bank of Italy, a player in the complex power dynamics of contemporary Italy. “It has a central role, whereas before it had a subaltern role,” Mr. Nuzzi said.

A spokeswoman for the Bank of Italy said it had been acting under European Union directives.