The Pope and the New York Times

Cardinal Ratzinger did more than anyone to hold abusers accountable.

Unlike the Roman papacy, in certain circles the New York Times still enjoys the presumption of authority. So when the front page carries a story headlined “Vatican Declined to Defrock U.S. Priest Who Abused Deaf Boys,” people notice.

Written by Laurie Goodstein and published March 25, the thrust is twofold. First, that the Rev. Lawrence Murphy, a priest who abused children at St. John’s School for the Deaf in Milwaukee from the 1950s to the 1970s, went unpunished. Father Murphy, she wrote categorically, “was never tried or disciplined by the church’s own justice system.”

This all feeds the kicker: “the effort to dismiss Father Murphy came to a sudden halt after the priest appealed to Cardinal Ratzinger for leniency.” In other words, Murphy got off scot-free, and the cardinal looked the other way.

Ms. Goodstein cites internal church documents, which the Times posted online. The documents were provided by Jeff Anderson and Mike Finnegan. They are described as “lawyers for five men who have brought four lawsuits against the Archdiocese of Milwaukee.”

What she did not tell readers is that Mr. Anderson isn’t just any old lawyer. When it comes to suing the church, he is America’s leading plaintiffs attorney. Back in 2002, he told the Associated Press that he’d won more than $60 million in settlements from the church, and he once boasted to a Twin Cities weekly that he’s “suing the s–t out of them everywhere.” Nor did the Times report another salient fact about Mr. Anderson: He’s now trying to sue the Vatican in U.S. federal court. 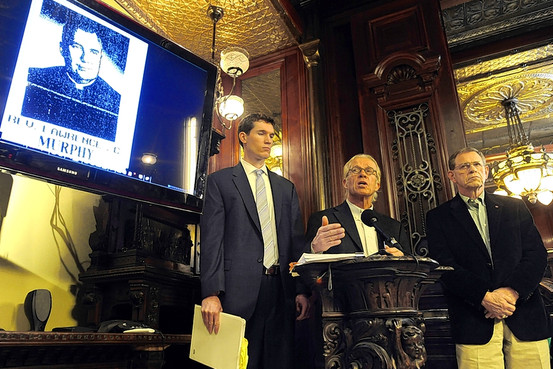 None of this makes Mr. Anderson wrong or unworthy of quoting. It does make him a much bigger player than the story disclosed. In fact, it’s hard to think of anyone with a greater financial interest in promoting the public narrative of a church that takes zero action against abuser priests, with Pope Benedict XVI personally culpable.

Asked about the omissions in an email, Ms. Goodstein replied as follows: “Given the complexity of the Murphy case, and the relative brevity of my story, I don’t think it is realistic for you to expect this story to get into treating other cases that these attorneys have handled.”

Martin Nussbaum, a lawyer who is not involved in the Murphy case but who has defended other dioceses and churches in sexual abuse suits, emailed me four interesting letters sent to Murphy from three Wisconsin bishops. These documents are not among those posted online by the Times. They are relevant, however, because they refute the idea that Murphy went unpunished.

In fact, the letters from these bishops—three in 1993 and one in 1995, after fresh allegations of Murphy’s misconduct—variously informed the priest that he was not to celebrate the sacraments in public, not to have any unsupervised contact with minors, and not to work in any parish religious education program.

It’s accurate to say Murphy was never convicted by a church tribunal. It’s also reasonable to argue (as I would) that Murphy should have been disciplined more. It is untrue, however, to suggest he was “never” disciplined. When asked if she knew of these letters, Ms. Goodstein did not directly answer, saying her focus was on what was “new,” i.e., “the attempts by those same bishops to have Father Murphy laicized.”

As for Rome, it did not get the case until 1996, when the archdiocese of Milwaukee informed the Congregation for the Doctrine of the Faith, then headed by Joseph Cardinal Ratzinger. Back then, the CDF handled abuse cases when they involved a breach of confession (Murphy was accused of using the confessional to solicit boys). At that time, too, the only real option for reducing Murphy to the lay state was a church trial. And the bishops in Wisconsin did begin a trial.

Ms. Goodstein’s original article said simply that Cardinal Ratzinger’s deputy halted Murphy’s trial after the priest sent the cardinal a letter saying he was dying and asking for clemency. A follow-up Times article last Thursday clarified that Rome came down the way it did because Murphy had shown “apparent good conduct” for the last 24 years, and “it would be difficult to try him” because “so much time [had] passed between the crimes and the trial.”

Plus, his bishops had already stripped Murphy of his priestly faculties, the equivalent of taking a doctor’s medical license. Does all this really suggest people callously looking the other way?

A few years later, when the CDF assumed authority over all abuse cases, Cardinal Ratzinger implemented changes that allowed for direct administrative action instead of trials that often took years. Roughly 60% of priests accused of sexual abuse were handled this way. The man who is now pope reopened cases that had been closed; did more than anyone to process cases and hold abusers accountable; and became the first pope to meet with victims. Isn’t the more reasonable interpretation of all these events that Cardinal Ratzinger’s experience with cases like Murphy’s helped lead him to promote reforms that gave the church more effective tools for handling priestly abuse?

That’s not to say that the press should be shy, even about Pope Benedict XVI’s decisions as archbishop and cardinal. The Murphy case raises hard questions: why it took the archbishops of Milwaukee nearly two decades to suspend Murphy from his ministry; why innocent people whose lives had been shattered by men they are supposed to view as icons of Christ found so little justice; how bishops should deal with an accused clergyman when criminal investigations are inconclusive; how to balance the demands of justice with the Catholic imperative that sins can be forgiven. Oh, yes, maybe some context, and a bit of journalistic skepticism about the narrative of a plaintiffs attorney making millions off these cases.

That’s still a story worth pursuing.