Pope’s No. 2: Sex Abuse Not Tied to Celibacy 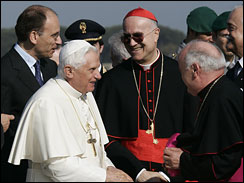 The Vatican’s second-highest authority says the sex scandals haunting the Catholic Church are linked to homosexuality rather than celibacy vows among priests.

Cardinal Tarcisio Bertone is the Vatican’s secretary of state and asserts that “many psychologists and psychiatrists have demonstrated that there is no relation between celibacy and pedophilia.”

He says others have shown “that there is a relation between homosexuality and pedophilia,” and “that is the problem.”

Bertone spoke during a news conference Monday in Chile.

He also asserted that the church had never impeded investigations of pedophilia by priests.

Earlier Monday, the Vatican responded to allegations that it had concealed years of clerical sex abuse by making it clear for the first time that bishops and other high-ranking clerics should report such crimes to police if required by law.

Victims have charged that the Catholic Church created what amounted to a conspiracy to cover up abuse by keeping allegations of abuse secret and not reporting them to civil authorities.

The Vatican has insisted that it has long been the Catholic Church’s policy for bishops, like all Christians, to obey civil laws. In a new guide for lay readers posted on its Web site, the Vatican explicitly spells out such a policy.