Europeran Pressphoto AgencyPope Benedict delivered a Mass marking the end of the Year for Priests at the Vatican in June, amid a scandal over sex-abuse allegations.

VATICAN CITY—Pope Benedict XVI has tightened the Vatican laws to streamline its handling of sexual-abuse cases world-wide and potentially hold more clerics accused of abuse accountable, people familiar with the matter said. The move marks the most concrete measures Pope Benedict has taken to address the crisis that rocked his papacy this year.

A Cloud at the Vatican 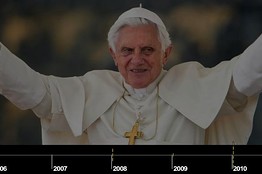 Take a look at Pope Benedict XVI’x rise to power and his struggle to confront the global sex-abuse scandal.

The revisions will double the statute of limitations on accused priests to 20 years from the alleged victim’s 18th birthday, the people said.

In addition, the revised decree will broaden the legal authority to Vatican officials to prosecute priests accused of abuse, the people said. The Vatican is expected to announce the revisions “within the next two weeks,” one person said.

The measures, which were reported Tuesday on the website of the National Catholic Reporter, represent the first legal shift to take place at the Vatican since the outbreak of abuse reports across Europe earlier this year.

The extension of the Vatican’s statute of limitations cuts to the core of one of the biggest obstacles to prosecuting sexually abusive priests because many victims take decades to come to terms with sexual abuse before reporting it to civil and church authorities. As a result, many abusive priests go unpunished by civil and church courts because the statute of limitations kicks in.

“The church will be able to be active in cases in which civil courts can’t,” said Monica-Elena Herghelegiu, a canon lawyer and senior lecturer at Germany’s University of Tubingen, where the pope was once a professor. 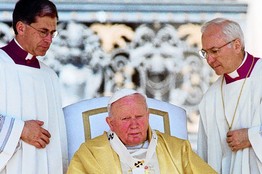 April 30, 2001: John Paul II issues a decree requiring bishops to report sexual abuse by priests to the Congregation for the Doctrine of the Faith, a Vatican office then headed by Cardinal Joseph Ratzinger, who later became Pope Benedict XVI. 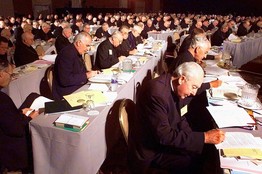 Agence France-Presse/Getty Images The 2002 U.S. Conference of Catholic Bishops is held in Dallas.

February 2003:  Cardinal Ratzinger introduces the ‘special faculties’ exceptions to Pope John Paul’s decree, allowing the Congregation for the Doctrine of the Faith to fast-track procedures to discipline some abusive priests.

April 12, 2010: Vatican issues an ‘introductory guide’ in an attempt to explain church rules on sexual abuse to the public. Bishops are required to investigate allegations of abuse by priests, to comply with civil laws in reporting such allegations and to notify the Vatican of any findings.

July 2010: The Vatican is set to announce revisions to the 2001 decree and double the statute of limitations on priests accused of abuse to 20 years after their alleged victim’s 18th birthday.

For more than a decade, Pope Benedict has been involved in shaping the Vatican’s response to cases of sexual abuse as both pope and the head of the Congregation for the Doctrine of the Faith.

In 2001, the pope, then known as Cardinal Joseph Ratzinger, helped draft John Paul II’s motu proprio and issued an accompanying letter explaining the rules to bishops world-wide. The decree instructed bishops to report all cases of sex abuse solicited by priests through confession. It also clarified church penalties for sexual abuse, such as stripping a priest of his ministry.

Some church officials and canon lawyers, however, complained the decree was too narrow in defining what kinds of cases fell under the Vatican’s jurisdiction. In 2003, then-Cardinal Ratzinger introduced a set of practices, known as the “special faculties,” that gave the Congregation for the Doctrine of the Faith a broader mandate to prosecute priests accused of sexual abuse.

Under the special faculties, for example, the congregation could skip the costly and time-consuming step of a canonical trial when cases were deemed “grave and clear” and proceed directly to disciplinary measures. In principle, the revised motu proprio will give those practices the formal authority of a papal decree under church law, the people said.

Barbara Dorris, outreach director for the Survivors Network for those Abused by Priests, said the extension of the statute of limitations was “a good step forward.”

She added, however, that the revision will still leave many cases unaddressed. “The average age of anyone who was abused as a child begins to deal with their abuse in a meaningful way is their mid-late 40s. Why do they need a statute of limitations on this crime at all?” she said.

The revisions have been in the works for years, one person said. However, the explosion of sex-abuse cases across Europe, including in the pope’s native Germany, has turned up pressure on the Vatican to act.

In one particularly sensitive case, the pope came under scrutiny for his handling of a priest known to church officials as an abuser in the early 1980s, when the pope was archbishop of Munich.

The then-Archbishop Ratzinger approved a decision to transfer the priest to the Munich archdiocese to undergo therapy, but the cleric was returned to pastoral work. The priest was convicted in 1986 of sexually abusing minors.

During a recent visit to Malta, Pope Benedict met with victims of abuse and pledged to take measures aimed at fighting sexual abuse.

—Margherita Stancati contributed to this article.