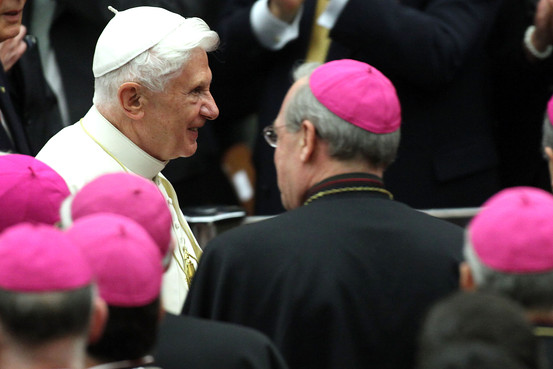 Pope Benedict XVI greets bishops at the end of a concert at the Paul VI hall held for the fifth anniversary of his pontificate on April 29 in Vatican City.

VATICAN CITY—Pope Benedict XVI will overhaul the Legion of Christ, one of the most powerful priestly orders in Roman Catholicism, in the wake of a Vatican investigation into decades of coverups inside the order that allowed its founder to sexually abuse seminarians and father a child.

In a statement Saturday, the Vatican announced plans for Benedict XVI to appoint a special envoy and set up a commission to restructure the Legion. The commission, the Vatican said, will rewrite the order’s statutes and “redefining” the military-like culture, which led its members to maintain a code of secrecy in the face of sexual abuse committed by its late founder Rev. Marcial Maciel Degollado.

“The conduct of Father Marcial Maciel Degollado had consequences in the life and the structure of the Legion that are so serious as to require a journey of profound restructuring,” the Vatican said.

The Legion couldn’t be immediately reached for comment on Saturday, which was a national holiday in Italy and much of Europe. Last month, after a year-long Vatican investigation into the Legion formally concluded, the order issued a statement apologizing for the first time to Father Degollado’s victims and repudiating him as a “model of Christian or priestly life.”

Father Degollado died in 2008 two years after Benedict XVI ordered him to retire from active ministry and maintain a “private life of penance and prayer.”

The planned overhaul of the Legion comes as Benedict XVI is under intense pressure to show his willingness to crack down on sexual abuse in the highest ranks of Catholicism. Over the years, Benedict XVI has stripped many sexually abusive priests of their ministry and met with victims in the U.S., Australia and Malta.

Critics, however, have faulted the pope for not taking swift action against bishops and other powerful figures within the Church hierarchy who for decades allowed the abuse to occur on their watch and, in many cases, failed to alert police and other civil authorities.

The Vatican’s handling of the Legion provides a rare case study of how, after decades of neglecting or ignoring abuse allegations, the Vatican is now trying to rein in powerful groups that allowed sexual abuse to occur.

Father Maciel, who founded the Legionaries in Mexico, thrived at recruiting priests and used his connections with Mexican businessmen to raise millions of dollars for the Catholic Church. That made him a favorite of the late Pope John Paul II in an era when priestly vocations began a steep decline.

Father Degollado also cultivated close ties with top Vatican officials, including Cardinal Angelo Sodano, who was then the Vatican’s No. 2 official and is now the dean of the College of Cardinals. Cardinal Sodano has declined repeated interview requests and did not respond to phone calls on Saturday, which is a national holiday in Italy.

One year after his election in 2005, Benedict XVI sanctioned Father Degollado, prohibiting him from celebrating Mass in public and ordering the priest to live a life of prayer and penance. Benedict XVI also ordered an investigation

The crackdown, however, only came after years of internal struggle within the Vatican over whether to take action against the priest. In 1997, nine former Legion seminarians went public about the abuse they suffered at the hands of Father Maciel in an article in the Hartford Courant.

The decision to overhaul the Legion follows a year-long investigation into the Legion of Christ. During the investigation, five Vatican-appointed investigators, called “visitators,” inspected the Legion’s global network of seminaries, schools and centers for its lay movement. The Legion has some 700 priests and 2,500 seminarians operating universities and schools in more than 20 countries from Brazil to Chile and Spain. In the U.S., it operates 21 prep schools, a start-up university in Sacramento and the U.S.’s only three seminaries for teenage boys. The Legion’s lay movement, known as Regnum Christi, has more than 50,000 followers around the world.

During the investigation, the prelates gathered “incontrovertible” testimony against Father Maciel that showed “objectively immoral behavior” stemming from a “life entirely without scruples and authentic religious feeling,” the Vatican said.

“Sincere zeal” among members of the order, the Vatican said, led them to believe Father Maciel was the victim of “calumny,” or sinful slander. Members were “disoriented and profoundly pained” when Vatican investigators presented them with evidence of his conduct, the statement said.

The Vatican said the Legion created a “mechanism of defense” around Father Maciel to shield him from accusations and suppress damaging witnesses from reporting abuse. “It made him untouchable,” the Vatican said.

The Vatican statement did not address whether the Legion’s current leadership will face any sanctions.