As Catholic leaders in Europe struggle to confront a growing clerical-abuse scandal, they have yet to fully tackle an uncomfortable, central question—how to deal with the established sexual abusers who have been given a second chance by the church.

In Germany and other parts of Europe, local dioceses have suspended several priests recently alleged to have committed abuse in the past. A number of priests convicted in the past of sexual abuse, however, continue to work in restricted pastoral roles in places such as nursing homes. 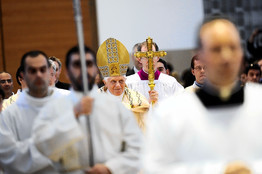 Agence France-Presse/Getty ImagesPope Benedict XVI, center, celebrates Vespers at the Church of the Most Holy Trinity in Fatima

Pope Benedict XVI on Tuesday said the Roman Catholic Church needs to “relearn penance” and seek purification for what he called “the sin within,” delivering his clearest statement yet that the church must take responsibility in the face of the scandal. But neither the Vatican nor local dioceses have said how they will look at older cases that have been resolved according to church and secular law.

Responses have varied. The national bishops’ conference in the U.S. has a zero-tolerance policy that calls for banning priests from active ministry after even one established instance of sexual abuse. In Germany, Austria, Belgium, Italy and most other countries, dioceses don’t preclude reassigning clergy in some cases.

Some church leaders say zero-tolerance rules could be too draconian depending on the circumstance of the offense and its aftermath. To many, “an absolute ban contradicts Christian ideas of dealing with guilt and forgiveness,” said Georg Plank, spokesman for the Graz-Seckau Diocese in Austria. The diocese is currently re-evaluating the cases of two priests it had reassigned following sex-abuse-related convictions 15 to 25 years ago.

But otherwise, it is often up to bishops to decide which priests are safe to return to ministry. “What are acceptable odds of getting it wrong?” asked the Rev. Thomas J. Reese, senior fellow at Georgetown University’s Woodstock Theological Center.

One clergyman given a second chance is Bruno Knapp, who was a parish priest in the north Hessen town of Pohlheim. In 2001, diocese officials suspended Rev. Knapp after it received abuse allegations against him.

In 2003, a German court found the then-56-year-old priest guilty of “sexual acts” in front of two altar boys and of showing them a pornographic video. It ordered him to pay a €8,400 ($10,600) fine and handed down an eight-month suspended sentence. In a press release at the time, the Diocese of Mainz, which had provided the information to prosecutors, said Rev. Knapp wouldn’t work in a parish or pastorally with children again.

Father Knapp has for the past several years been the chaplain at a senior- and assisted-living home in Mainz, ministering to residents and visitors and performing sacraments such as last rites.

Father Knapp declined to comment. A diocese spokesman said the priest’s transfer is in line with current German church policy, which prohibits priests found guilty of abuse from working with children but allows for them to perform restricted religious functions.

“One has to consider that if such priests were thrown out altogether, the problem would just be passed on and handed off to society,” said the diocese spokesman, Tobias Blum. He added that Father Knapp’s supervisors were informed of his prior sentence and that he continues therapeutic treatment.

The harder line is represented by the zero-tolerance policy adopted by U.S. bishops in 2002, amid an abuse scandal that broke out that year, which bars for life priests who had been convicted or credibly accused once of sexual abuse. Last month, Catholic leaders in India pledged to do the same.

Cardinal William Levada, who succeeded Pope Benedict as head of the Vatican office charged with handling abuse cases reported to Rome, called the U.S. norms, which include the zero-tolerance rule, a “real success story.” In a recent interview with U.S. public broadcaster PBS, Cardinal Levada said these norms could serve as a model to other bishops around the world.

The Vatican has so far refrained from imposing such a policy broadly. Rome requires dioceses to punish priests according to the “gravity of the crime,” said Vatican spokesman Rev. Federico Lombardi.

Germany’s church is now revising its abuse-handling policies but hasn’t said whether it would adopt a zero-tolerance rule. The Rev. Joerg-Ingo Simon, convicted of sexual-abuse charges in 2004, said he is grateful that current German policy gives some priests a second chance.

Father Simon, then a priest in a Rhineland town, set his own prosecution into motion when he confessed to local authorities that he had “indecently touched a boy’s genital area,” according to a diocese press statement announcing the investigation. A court subsequently gave him a nine-month suspended sentence and ordered him to pay a €2,500 fine to a local child-protection organization.

“I realize that I can never work in a parish again,” says Father Simon, who now works in a Frankfurt-area nursing home under similar conditions as Father Knapp. He said he had notified authorities because he wanted to confront his actions, which he said involved a “private situation,” separate from his role in the parish that hadn’t reoccurred. “One has to distinguish one case from another,” he said.

The case against leniency can be seen in the matter of the Rev. Peter Hullermann, a known child sexual-abuser transferred to the Munich archdiocese during Pope Benedict XVI’s tenure as archbishop in 1980. Despite a later conviction on fresh sexual-abuse allegations, the priest continued in active ministry until earlier this year, providing pastoral services to tourists in a Bavarian spa town. Archdiocese officials said they suspended him in March for running afoul of orders to stay away from children.

Critics say the church has little chance of reclaiming moral authority if it doesn’t take a hard line.

“If the church were really to go through all of the cases and deal with every priest that’s been parked somewhere, that to me would be a step in gaining credibility,” said Johannes Heibel, founder of the German group Initiative Against Violence and Sexual Abuse of Children and Youth. “As long as they aren’t, they’re not showing they’re serious enough.”

—Stacy Meichtry and John W. Miller contributed to this article.

A sampling of policies on returning abusive Catholic priests to ministry:

U.S: Since 2002, priests involved in abuse can’t return to any kind of ministry.

Germany: Policy, now under revision, prohibits clergy found to have committed abuse from working with children but doesn’t rule out restricted pastoral roles.

Ireland: Policies are currently under review; a zero-tolerance approach is under consideration.

Italy: Bishops adhere to Canon laws issued by Vatican. Some priests have been banned from ministry but bishops have discretion in meting out penalties.

The Netherlands: The Dutch church doesn’t have a zero-tolerance policy but says it has become stricter in the past few years and is reviewing abuse-case guidelines. Priests in some cases may continue some form of ministry after having been found guilty of abuse.

India: Bishops last week drafted new guidelines that include a zero-tolerance policy similar to that of the U.S.