(Vatican Radio) The Press Office of the Holy See has released the following statement concerning the possibility that a member of the Holy See’s diplomatic mission to Washington may have violated laws relating to child pornography.The priest in question, the statement says, has been recalled to Vatican City, in accordance with common diplomatic practice.

On August 21 last, the Department of State of the United States of America notified the Secretariat of State, through diplomatic channels, of a possible violation of laws relating to child pornography images by a member of the diplomatic corps of the Holy See accredited to Washington.

The Holy See, following the practice of sovereign states, recalled the priest in question, who is currently in Vatican City.

Having received such information from the United States government, the Secretariat of State transmitted this information to the Promoter of Justice of the Vatican Tribunal.

The Promoter of Justice opened an investigation and has already commenced international collaboration to obtain elements relative to the case.

It should be noted that, as provided by the laws in force applicable to all preliminary inquiries, the investigations carried by the Promoter of Justice are subject to investigative confidentiality. 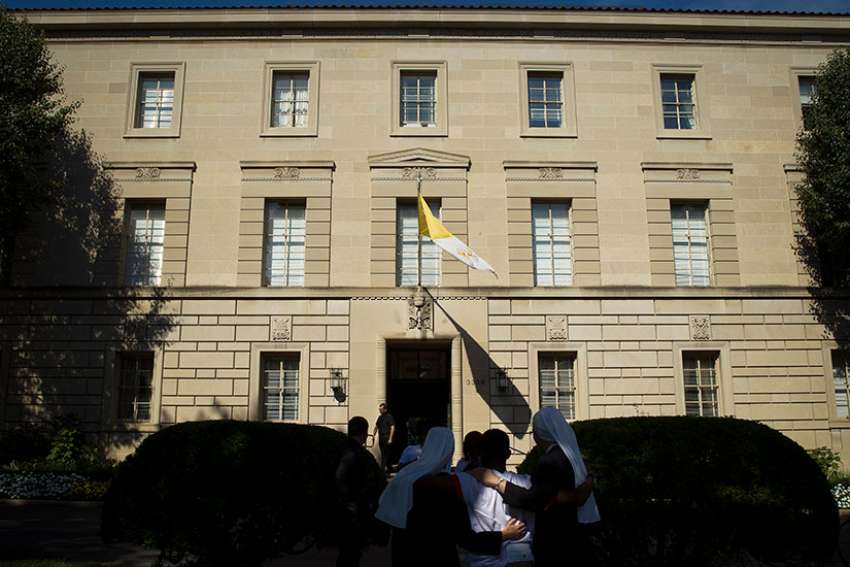 People are seen outside the Vatican Embassy, or apostolic nunciature, in Washington in 2014. A member of the Vatican diplomatic corps serving in Washington has been recalled to the Vatican where he is involved in a criminal investigation involving child pornography, the Vatican said. CNS photo/Tyler Orburn

VATICAN CITY – A member of the Vatican diplomatic corps serving in Washington has been recalled to the Vatican where he is involved in a criminal investigation involving child pornography, the Vatican said.

The Vatican press office said Sept. 15 that it was notified Aug. 21 by the U.S. State Department “of a possible violation of laws relating to child pornography images by a member of the diplomatic corps of the Holy See accredited to Washington.”

“The Holy See, following the practice of sovereign states, recalled the priest in question, who is currently in Vatican City,” the press office said.

The Associated Press reported that the State Department confirmed it had asked the Vatican to lift the official’s diplomatic immunity. It said that request was denied.

The 1961 Vienna Convention on Diplomatic Relations, signed by most nations of the world, including the United States and the Holy See, stipulates that diplomatic personnel “shall not be liable to any form of arrest or detention” in the host country. The host country may, however, ask the sending country to waive immunity or the sending country, in this case, the Vatican, may choose to recall the diplomat and proceed with a criminal investigation and possible prosecution of its own.

The president of the U.S. Conference of Catholic Bishops called the allegations against the Vatican diplomat “a serious issue” and referred to the bishops’ Charter for the Protection of Children and Young People.

“We hope the Holy See will be forthcoming with more details,” said Cardinal Daniel N. DiNardo of Galveston-Houston, conference president. “While we don’t know all the facts, consistent with our charter, we reaffirm that when such allegations occur, an immediate, thorough, and transparent investigation should begin in cooperation with law enforcement, and immediate steps be taken to protect children. The protection of children and young people is our most sacred responsibility.”

The Vatican said the priest’s identity and other details are covered by “investigative confidentiality” during the preliminary investigation stage. The Vatican yearbook lists the nuncio, Archbishop Christoph Pierre, and three priests — an Indian and two Italians — as making up the diplomatic staff at the Washington nunciature.

“The promoter of justice opened an investigation and has already commenced international collaboration to obtain elements relative to the case,” the Vatican said.

Greg Burke, director of the Vatican press office, said the investigation is concentrated on matters defined as “crimes against children” in the Vatican’s 2013 “Supplementary Norms on Criminal Law Matters.”

Specifically, he said, the investigation is referring to what the law defines as “child pornography,” which “means any representation, by whatever means, of a minor engaged in real or simulated explicit sexual activities as well as any representation of the sexual parts of a minor for primarily sexual purposes.”

Burke also referred reporters to section 10 of the supplementary norms, which discuss criminal penalties for a person found guilty of producing or selling and trading child pornography; in those cases Vatican law foresees a maximum of 12 years imprisonment and a fine of up to 250,000 euros ($299,000).

When Pope Francis updated Vatican City law in 2013, he specified that it applied to Vatican employees serving abroad, including Vatican diplomats stationed around the world in nunciatures.

Any charges or penalties arising from a Vatican City criminal investigation are in addition to the universally applicable canon law, norms and sanctions for priests accused of child sexual abuse or possession of child pornography. The Congregation for the Doctrine of the Faith investigates those charges and the canonical penalties include the possibility of the priest being expelled from the priesthood.

Similar procedures were followed when then-Archbishop Jozef Wesolowski, a Pole who served as nuncio to the Dominican Republic, was accused of child sexual abuse in 2013. Recalled to the Vatican, the canonical court dismissed him from the clerical state; at that point, the then-papal spokesman, Jesuit Father Federico Lombardi, said he no longer had diplomatic immunity and could possibly be extradited to the Dominican Republic to face charges there.

In the end, the Vatican City tribunal conducted its own criminal investigation. Confined to Vatican property, Wesolowski’s trial was scheduled to begin in July 2015, but he ended up in the hospital the day before the trial was to open. He died in August 2015 without having appeared before the court. 1The diplomat is believed to be back in Vatican City

A high-ranking Vatican priest working in the Holy See’s embassy in Washington has been recalled after US prosecutors asked for him to be charged in an investigation into images of child abuse, officials said.

The Vatican declined to identify the diplomat, but said he was back in Vatican City and that Vatican prosecutors had launched their own probe.

The US State Department said it had asked the Vatican to lift the official’s diplomatic immunity on August 21, but the request was denied.

For the State Department to make such a request, its lawyers would have needed to be convinced there was reasonable cause for criminal prosecution.

The Vatican said the State Department had notified officials on August 21 of a “possible violation of laws relating to child pornography images” by one of its diplomats in Washington.

A US official said the priest was a senior member of the Vatican embassy staff. The Vatican year-book lists three counsellors who work under the nuncio, or ambassador.

The Vatican said recalling the priest was consistent with diplomatic practice of sovereign states. In declining to identify him, officials said the case was subject to confidentiality while still under investigation.

The Vatican has recalled envoys before, including its former ambassador to the Dominican Republic, who was recalled in 2013 after being accused of sexually abusing young boys on the Caribbean island.

The Vatican justified its decision to remove Monsignor Jozef Wesolowski from Dominican jurisdiction by submitting him first to a canonical court at the Vatican, and then putting him on trial in the Vatican’s criminal court, which has jurisdiction over the Holy See’s diplomatic corps.

Wesolowski was defrocked by the church court, but he died before the criminal trial started.

Dominican prosecutors initially baulked at the recall, and they never filed charges because of his immunity.

The Vatican does not have extradition treaties.

After he was defrocked, Wesolowski lost his diplomatic immunity and the Vatican said he could be tried by other courts. However, it refused to provide Dominican authorities with information about his whereabouts or how he had pleaded to the charges.