Gay activists, angry Protestants and bemused Catholics turn out to meet Benedict XVI in London on his second day in the UK 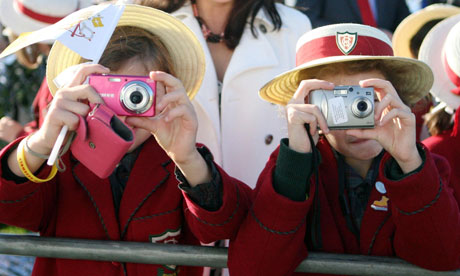 John XXIII, the much loved reforming pope of the 1960s, apparently once said that the worst thing about being pontiff was knowing that you would one day die in the bed in which you went to sleep every night. He meant that being pope is a lifelong job: popes don’t resign. Today, his successor-but-four, Benedict XVI, was urged to do just that.

Being transformed in your late seventies from being a shy, retiring German theologian into a shy, retiring world celebrity must be tough and yesterday, on the second day of his official visit to Britain, the pope experienced the downsides as well as the upsides of the papacy.

Another gruelling day for an 83-year-old, including three church services and four addresses, began by being shouted at by Peter Tatchell and culminated in being prayed about by the Archbishop of Canterbury.

Arriving at St Mary’s University College in Twickenham, the pope was swept past an ecumenical line of protesters: several hundred gay people, orchestrated by Tatchell with a loud-hailer, calling for him to resign over the church’s paedophilia scandal and attitude to homosexuality and, further along, three brass-lunged Protestant fundamentalists bellowing out the error of his ways.

Between them stood several hundred bemused Roman Catholics, hoping to catch a glimpse of the pontiff in the back of his black limousine, as his 14-car convoy, complete with police outriders and an ambulance, roared past.

As they waited, mingled sounds of “The Pope must resign,” “Put not your trust in a man in white raiment … worshipping the Pope won’t save you on judgment day” and “Ave Maria” echoed around the quiet suburban streets of west London. Repent, resign, hosanna – no wonder religion is baffling.

On the college’s playing fields about 4,000 children from Catholic schools were waiting to be inspired. They had come from as far away as the north of England and Wales, starting off in their coaches in the early hours, entertained while they waited by Andy Akinwolere, a Blue Peter presenter, of whose works they may be more conscious than the pope’s.

By the time the pope finally appeared to do a tour of the running track in his popemobile, they’d already eaten their sandwiches, examined their yellow papal goodie-bags, texted their friends and – the youngest of them – made small tents out of the foil blankets they had been given.

“It’s really cool,” chimed a group of youngsters from St Benedict’s, Ealing, Chris Patten’s old school and one that is currently riven with accusations of sex abuse by teachers 30 years ago.

“On the screen he seems a bit unhuman but he’s going to come out and drive about,” they confided. “We had to get to school for 7am and, if we eat our lunch really slowly, we won’t get back in time for lessons later.”

The children cheered the Holy Father as lustily as they might have greeted the appearance of Father Christmas and watched him settle in the far distance, dwarfed in his enormous red chair a bit like an old-fashioned Jackanory presenter.

But it has to be said the pope is not the sort of chap to keep youngsters spellbound. It is partly the accent – “Our fazzer an’ ze son an’ ze hol’ zpirit,” partly the monotone delivery and partly the content, which was dry and earnest. He may not know many jokes, even German ones.

As he spoke, many of the children chatted among themselves. They cheered up however when pupils stepped forward to present the pope with presents.

What do you give a man with everything, and nothing? A book about Welsh Catholic martyrs, a batik stole and a cross to add to his collection. More cheers followed for news of the creation of the John Paul II Sports Foundation, to groom Catholic sportsmen and women of the future. The sigh of relief that the organisers had chosen Manchester City’s Brian Kidd to front it, rather than – say – Wayne Rooney was almost palpable.

Benedict urged the children to become the saints of the future, almost in the manner of a careers master: “Perhaps some of you have never thought about this before. Perhaps some of you think being a saint is not for you …” But unfortunately he was not able to tell them how many GCSEs they’d need.