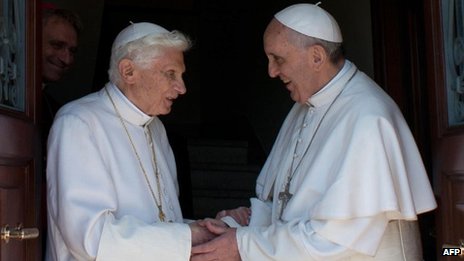 The former Pope, Benedict XVI, has denied any role in covering up child sex abuse by priests, in his first public comments since retirement.

The emeritus Pope, as he is now known, addressed the issue in a detailed letter to a prominent atheist, which also covered many other matters.

It is thought to be the first time that Benedict has publicly rejected personal responsibility for covering up abuse.

Some critics say he must have known of efforts to protect abusive priests.

Benedict’s letter, to the professor of mathematics Piergiorgio Odifreddi, was published in La Repubblica newspaper after the professor sought the former Pope’s permission.

His comments are the first to be released publicly since he left office, saying he would retreat to a life of prayer. He was apparently concerned not to have a public role that might impinge on his successor, Pope Francis.

Regarding the repeated allegations of abuse which arose during his pontificate, Benedict denied he had suppressed investigation of paedophile priests.

And, while admitting the horror of abuse, he insisted priests had no greater tendency to paedophilia than anyone else.

He wrote: “I never tried to cover up these things. That the power of evil penetrates to such a point in the interior world of the faith is, for us, a source of suffering.

“On the one hand we must accept that suffering, and on the other, at the same time, we must do everything possible so that such cases aren’t repeated.

“It’s also not a motive for comfort to know that, according to sociological research, the percentage of priests guilty of these crimes is no higher than in other comparable professional categories.

“In any event, one must not stubbornly present this deviance as if it were a nastiness specific to Catholicism.”

His comments were a direct response to points made in Prof Odifreddi’s 2011 book Dear Pope, I’m Writing to You, which in turn was a response to Benedict’s Introduction to Christianity.

Benedict also responds to several other criticisms made by the Italian, including whether theology can be considered a science, and what can be known about Jesus as an historical figure.

Prof Odifreddi said he appreciated the tone of his dialogue with Benedict, and that, while they might disagree on almost everything, they at least had one aim in common: “The search for the truth, with a capital ‘T’.”