SAGINAW (WJRT) (2/26/2018) – Charges resulting from alleged sexual abuse by a Saginaw Catholic priest could be just the beginning.

The Rev. Robert DeLand, pastor of St. Agnes Parish in Freeland, was arrested Sunday night and arraigned Monday on two charges of second-degree criminal sexual conduct and one count of gross indecency between males.

The arrest came after a seven-month investigation that began in August, when a 22-year-old male accused DeLand of sexually abusing him at a location in Saginaw Township.

DeLand also is charged with having improper sexual contact with a 17-year-old boy from Tittabawassee Township from November 2017 until Sunday evening.

Saginaw County Prosecutor John McColgan said other alleged victims of DeLand have filed reports with authorities and are being investigated. The charges DeLand is facing currently resulted from the only two cases police and prosecutors have fully investigated so far.

“We have been inundated with a number of calls from individuals alleging similar acts over the last 30 years,” Berg said. “So we’re beginning to sort through that and contact the appropriate police agencies so that some investigations can be done.”

DeLand has worked at a variety of churches during his career, but police didn’t want to discuss where. Anyone who wants to file a report about DeLand’s behavior is asked to call the Saginaw County Prosecutor’s Office.

“The investigation is going to continue,” McColgan said. “It is far from over.”

Tittabawassee Township police launched their investigation in August 2017 after the initial report from the 17-year-old. Berg said he spoke with the prosecutor’s office in November, when he learned Saginaw Township police also were investigating DeLand’s behavior.

Saginaw Township police first learned of DeLand’s alleged behavior in November, when the 22-year-old made a report. The two police departments and the prosecutor’s office then joined forces in the investigation.

Authorities kept DeLand under constant surveillance during the investigation to make sure nobody else was victimized.

“We were monitoring his activities at the school and at after-school events,” Berg said.

Police turned the 17-year-old Tittabawassee Township victim into an undercover informant after he filed a report. He helped police by taking part in a sting operation to catch DeLand in the act Sunday evening.

DeLand allegedly brought the 17-year-old to his condominium in Saginaw Township on Sunday evening, where police say he performed more acts against the victim’s will.

“It was almost a carbon copy of what happened to Saginaw Township’s (22-year-old) victim,” Berg said.

“There were a number of grooming techniques used to befriend the victim, to prey on the victim’s weaknesses and to lure the victim to the residence on Mallard Cove,” McColgan said.

DeLand is accused of using alcohol and the drug Ecstasy to help manipulate the 17-year-old victim, Berg said. Alcohol was used in the case involving the 22-year-old, Pussehl said.

However, DeLand currently is not facing any charges related to the drug and alcohol use. McColgan said that could change soon.

SAGINAW, MI — Sunday, the Rev. Robert DeLand Jr. conducted Mass at St. Agnes Church in Freeland and renewed the vows of a couple who had been married 25 years, according to people who were there.

He was arrested later that day.

Monday, he was in jail charged with sexual assault after police in Tittabawassee and Saginaw townships finished a months-long investigation into allegations of  sex crimes involving alcohol, drugs and underage boys.

During a joint press conference with the Saginaw County Prosecutor’s Office and Saginaw and Tittabawassee townships’ police departments, officials called for more victims to come forward.

According to Tittabawassee Township Police Detective Brian Berg, police arrested the 71-year-old DeLand at his Saginaw Township condominium after a six-month investigation.

The victims are a 17-year-old high school male and a 21-year-old male.

The 17-year-old helped police in their investigation and surveillance of DeLand, something Berg said was “very brave of him.”

According to police, the 17-year-old male was assigned to do community service through DeLand.

A sexual assault complaint was filed in August 2017 and claimed the incident happened inside the priest’s condo, according to police.

As a result of the arrest and criminal investigations, DeLand has been banned from Freeland Community Schools, as well as the CAN Council Great Lakes Bay Region properties, where he serves as a board member.

DeLand, who is represented by Saginaw attorney Alan Crawford, is allowed to be released on GPS tether while awaiting future court proceedings.

He is scheduled to appear in Saginaw County District Court Judge David Hoffman’s courtroom for a preliminary examination at 2:30 p.m. on March 19.

Most recently, DeLand has served as the Diocese of Saginaw’s judicial vicar and pastor of St. Agnes Catholic Church in Freeland. A judicial vicar is appointed by a diocese’s bishop and oversees that diocese’s judiciary.

In a 2010 interview with The Bay City Times, DeLand said he felt the calling to become a priest while in high school.

DeLand added that he spent vacation time volunteering at St. Vincent Home in Thomas Township, an assessment center for youths ages 12 to 17.

Response from the Catholic Diocese

In a press release, the Catholic Diocese of Saginaw said that it had first learned about DeLand’s arrest on Monday morning from local media.

“The Diocese of Saginaw had no previous knowledge of the police investigation or of these allegations,” according to the release’The diocese also said they plan to fully cooperate with law enforcement and asked for prayers for DeLand and his alleged victims.

DeLand will be placed on administrative leave while the investigation is underway, according to the press release.

The recent news about the sexual assault charges against 71-year-old Father Robert DeLand has definitely shaken up the Catholic community in Freeland. (Photo credit: Jesse Gonzales)

FREELAND, Mich. — The recent news about the sexual assault charges against 71-year-old Father Robert DeLand has definitely shaken up the Catholic community in Freeland.

After a six month investigation, 71-year-old Fr. Robert DeLand, or ‘Fr Bob’ as he was called, was arrested and charged with criminal sexual conduct, attempt to commit a crime and gross indecency between men.

Many said they were blindsided by the recent allegations.But one parishioner at Freeland’s Saint Agnes Catholic Church, Marlene Bethune, said she wasn’t shocked by the news.

“I really wasn’t surprised,” she said.

She said she was a parishioner at Saint Agnes for 9 years, but knew the Father for longer.

“When he was at St. Peter & Paul’s, he was my pastor there,” she said. “My children were in school when he was there, so I’ve known him a long time.”

She even got to see him behind the scenes when she cooked and cleaned at the rectory, where he once lived.

“I’ve never witnessed anything,” she added. “But I’ve had my suspicions.”

Unlike Bethune, the executive director with the Child Abuse and Neglect Council said she didn’t see this coming.

Father Bob served on the CAN Council’s board and was a prominent figure in the community.

One individual, who was unable to go on-camera, said Father Bob married her and her husband and prayed for them when they had a miscarriage.

She said he has been a part of her family for 20 years and she is hoping these allegations aren’t true.

by Joel Feick and Associated Press 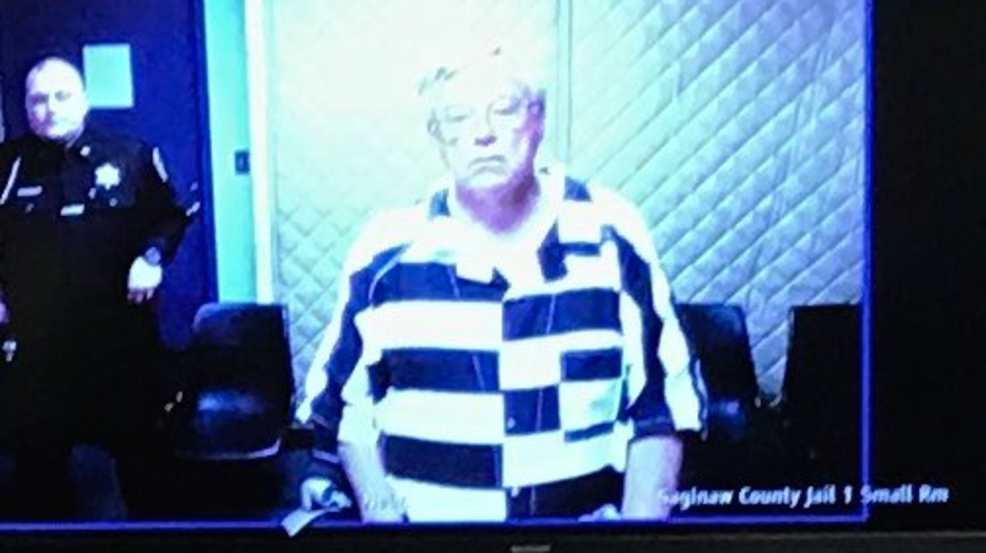 SAGINAW, Mich. — The pastor of a Catholic Church in Freeland, Fr. Robert DeLand, is out of jail on a tether Monday.

Earlier in the day he faced a Saginaw County judge on three charges involving two men: one is 17, the other is 21.

After a six month investigation, 71-year-old Fr. Robert DeLand, or ‘Fr Bob’ as he was called, was arrested and charged with criminal sexual conduct, attempt to commit a crime and gross indecency between men.

This all happened while Fr Deland was pastor at St. Agnes Church in Freeland.

At his arraignment Fr. Deland said just a few words.

According to police, the 17-year-old victim agreed to go undercover with police.

Inside his Saginaw Township condo, the complaint alleges Fr. DeLand provided ecstasy and alcohol to the teenager before an alleged sexual encounter. There was another incident last August with a 21-year-old.

During a court appearance Fr. Deland’s attorney defended him.

Allan Crawford says ” as a pastor he’s helped hundreds if not thousands of people.”

But police believe he hurt people too.

Berg says ” since this hit the media, we’re being inundated with calls from potential victims”.

SAGINAW, Mich. — A Roman Catholic priest has been charged with sex crimes in Saginaw County.

The 71-year-old is pastor at St. Agnes Church in Freeland and has been a longtime priest in the Saginaw Diocese.

DeLand was released on bond but must wear an electronic tether at his home in Saginaw Township. He can’t have contact with anyone under 21.

His attorney says the priest has helped “not hundreds but thousands” of people.

Police say they’ve received several complaints about DeLand since August. He had been under surveillance since November, although police say kids were not in danger during the covert operation.

“The Catholic Diocese of Saginaw first learned about the arrest of the Rev. Robert J. DeLand this morning from local media who received a news release overnight from Tittabawassee Township Police. The Diocese of Saginaw had no previous knowledge of the police investigation or of these allegations.”

“Upon receiving the information from media this morning, the diocese requested a copy of the police report and warrant issued against Father DeLand, which we have not yet received.”

“I am deeply distressed by this most serious situation,” said the Most Rev. Joseph R. Cistone, Bishop of Saginaw. “Clearly, the diocese will cooperate fully with law enforcement and their investigation. I ask that you keep in your prayers Father DeLand and anyone who has brought forward allegations against him. My heartfelt prayers and support go out to the St. Agnes Parish family and the entire Freeland community.”

“Father DeLand, who is pastor at St. Agnes Parish in Freeland, as well as a judicial vicar for the Diocese of Saginaw, will be placed on administrative leave during this investigation in accord with diocesan policy.”