Thousands of previously-secret documents released Tuesday by the Archdiocese of Chicago reveal in graphic detail how priests accused of sexual abuse were transferred from parish to parish and how concern for the priests’ reputations took precedence over their victims.

The more than 6,000 pages of letters and internal memos from the 1980s and 1990s also detail the reluctance of church leadership and law enforcement officials to investigate the allegations.

The released documents are part of an eight-year-long negotiated settlement between attorney Jeffrey Anderson and the Archdiocese. The files concern 30 Chicago Archdiocesan priests with the abuse dating back more than 20 years ago. Of the 30 priests, 14 are dead.

While the abuse crisis has long been reported, the files give the first ever look behind the scenes at how the Archdiocese handled the crisis. There are letters from both Cardinal Joseph Bernardin and Cardinal Francis George to the accused priests, memos on internal church meetings, legal documents, letters from the priests themselves, as well as information as to exactly when church leaders learned of the first allegations.

The documents, released by AndersonAdvocates.com, will also be found at BishopAccountability.org.

(Editor’s Note: Many of the details included in the previously-secret documents are graphic in nature. Readers should consider whether they want to review such material.)

One of the most notorious cases was Robert Mayer, who is no longer a priest, and who was sentenced to three years in jail. There is an internal memo from now-retired Bishop Ray Goedert who received allegations that two young men “committed suicide as a result of Mayer’s molestation.” That allegation was part of the Archdiocese files in 1989, yet Mayer was reassigned one more time.

The Archdiocese also had other complaints about Mayer’s unusual behavior with teenagers:  offering them alcohol, showing them pornography and appearing nude in the rectory, as well as more serious allegations that he fondled altar boys since 1982.

That’s the same year that a youth director from St. Mary’s in Lake Forest detailed in an affadavit how Mayer appeared nude in the rectory and told others of an affair with a married teacher. That youth director described Mayer’s control of the teenage boys that were often found in his room in the rectory as reminding him “of the kind of control I heard Charles Manson had over his followers.”

After allegations of fondling two altar boys at his Fox Lake cottage, the Archdiocese settled a case in 1984 for $15,000 and moved Mayer to three more parishes. He signed restrictions — that are detailed in these newly released documents — promising to never be alone with anyone younger than 21. However, at each new assignment there were allegations of misconduct.

Not only were church officials reluctant to react, so were law enforcement officials.

Des Plaines police were notified in 1987 after there were allegations of “kids all over the place” and underage drinking taking place at the Stephen’s Rectory. In fact, then-Cook County State’s Attorney Rich Daley telephoned the Archdiocese “unsolicited” and, according to the files, “the Police Captain is not held in high esteem by the State’s Attorney’s Office.”

One handwritten note from a supervisor in 1987 notes, “I don’t want anyone to see these reports.”

Mayer was eventually charged with criminal sexual abuse in 1992 for a complaint at his last parish, St. Odilo’s in Berwyn. According to the files, victims have continued to come forward alleging abuse by Mayer through 2009.

As for Norbert Maday, he was convicted on three counts of sexual assault and given a 20 jail term in 1994. These new files disclose the personal letters Cardinal Francis George and Bernardin wrote to Maday. Maday’s abuse of altar boys took place at his Wisconsin cottage, so he served his prison term there.

When first accused, Maday was “confined to his quarters”, and while the priest wanted to write a letter while the investigation was underway, he was warned no such letter would appear because “it might trigger someone else.”

While Maday was serving his jail term, Cardinal George wrote a letter to the governor of Wisconsin thanking him for “exceptional act of charity” by allowing Maday’s mother’s body to be brought for viewing to the Wisconsin prison. Cardinal George also wrote to Maday in 2001 that he was “very sad your clemency was denied.”

The Archdiocese points out that after becoming aware of additional information about Maday, Cardinal George sent a letter to the prison parole authorities in Wisconsin asking them to keep Maday incarcerated.

In a statement released Tuesday, the Archdiocese emphasized that 95 percent of cases detailed in the files occurred before 1988 and said that currently no person “with even one substantiated allegation of sexual abuse of a minor serves in ministry in the Archdiocese of Chicago.” Still, it said it “acknowledges that its leaders made some decisions decades ago that are now difficult to justify.”

“While we complied with the reporting laws in place at the time, the Church and its leaders have acknowledged repeatedly that they wished they had done more and done it sooner, but now are working hard to regain trust, to reach out to victims and their families, and to make certain that all children and youth are protected,” the statement reads.

The priest sex abuse crisis was initially uncovered by NBC 5 in 1990. The number of victims to come forward has continued for years, with some victims waiting as long as three decades to come forward.

In Files, a History of Sexual Abuse by Priests in Chicago Archdiocese

By STEVEN YACCINO and MICHAEL PAULSON 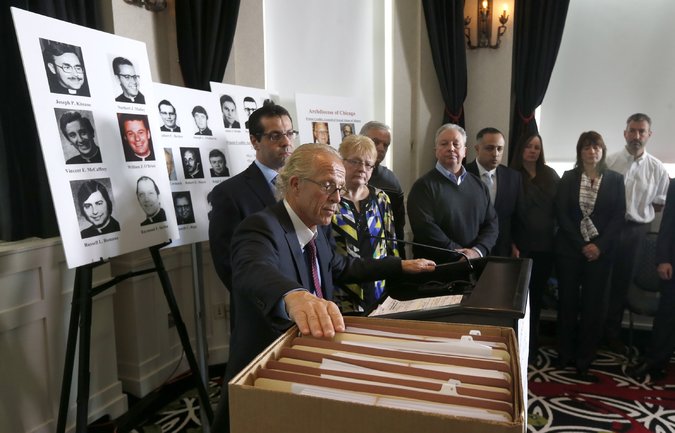 Jeff Anderson, a lawyer for many victims of sexual abuse by priests, at a news conference Tuesday in Chicago with some of the files that were released. Charles Rex Arbogast/Associated Press

CHICAGO — One priest, the Rev. William J. Cloutier, was accused of raping a boy in his summer cottage, locking the door when the 13-year-old started screaming, and then brandishing a handgun while threatening to kill him if he told anyone. Another, the Rev. Robert C. Becker, would take boys to a trailer where, they said, he slept beside them and molested them. And the Rev. Joseph R. Bennett was accused of raping a girl with the handle of a paten, a plate used to hold eucharistic bread.

Thousands of documents gleaned from the personnel files of the Archdiocese of Chicago were released to the public on Tuesday, unspooling a lurid history of abuse by priests and halting responses from bishops in the country’s third-largest archdiocese. In each case, the priests ultimately died or were ousted from ministry, and in most cases, the allegations were never proved in a criminal court. But the documents suggest that church officials were at times quite solicitous toward priests accused of abuse.

In one remarkable instance in 1997, Gov. Tommy Thompson of Wisconsin was persuaded to allow the body of an abusive priest’s mother to be brought to the prison where the priest, the Rev. Norbert J. Maday, was incarcerated so he could pay his respects. Cardinal Francis E. George, the Roman Catholic archbishop of Chicago, described the accommodation in a thank-you note as “an exceptional act of charity.”

Cardinal George’s predecessor, Cardinal Joseph L. Bernardin, opted not to defrock the same priest, writing a letter to him in prison declaring that “you have suffered enough by your present deprivation of ministry and your incarceration.”

On Tuesday, shortly after the documents were posted online, the Archdiocese of Chicago published on its website a statement again apologizing for abuse by priests and declaring, “the Archdiocese acknowledges that its leaders made some decisions decades ago that are now difficult to justify.”

“We realize the information included in these documents is upsetting,” the statement said. “It is painful to read. It is not the Church we know or the Church we want to be.”

A few hours later, abuse victims and their lawyers gathered in the 23rd-floor ballroom of a downtown hotel, lined up in front of posters and a video screen displaying photographs of priests accused of abusing minors. At the side of a lectern sat three cardboard boxes filled with copies of the files.

Jeff Anderson, a lawyer who has represented numerous victims of clergy sexual abuse around the nation, said the documents depicted a “systematic, ongoing, decades-long, continuous pattern of conscious choices by top officials of the archdiocese,” and argued that church officials were complicit in the abuse when they failed to remove abusers from ministry.

“The priorities have been demonstrated to have been the protection of the offenders and the reputation of the archdiocese,” he said. Later, turning to the victims beside him, he said, “These children were not as important to them as the clergy were.”

Most of the abuse described in the documents was alleged to have taken place years ago; about half of the accused priests are dead, and many of the victims have already been given financial settlements from the archdiocese. Some of the documents have previously been available online, and have received attention in local news reports, as a result of criminal prosecutions and civil suits.

But the victims have pressed for public release of the files, arguing that the comprehensive set of documents will provide an important form of reckoning, chronicling what church officials did, and did not do, when they learned of accusations that priests had molested minors.“For some of us it will be answers, for some of us it will be peace of mind, for some of us it’s wanting to know, but for all of us it’s a start,” said Angel Santiago, 47, who won a $700,000 settlement from the archdiocese in 2011 after accusing the Rev. Joseph L. Fitzharris of abusing him in the early 1980s. “It’s a little more weight off my shoulders,” he said, “but I still carry some of it.”

Father Fitzharris, who acknowledged abusing multiple boys, was defrocked in 2009. Father Cloutier, whose threats with the gun were investigated but not prosecuted by the local police in 1979, went on to face further accusations of abuse; he resigned from the priesthood in 1993 and died in 2003. Father Becker, who in 1986 wrote in a letter to Cardinal Bernardin about “how full of shame I feel for having betrayed you and the archdiocese,” died in 1989. Father Bennett, who denied most of the many accusations against him, resigned from the priesthood in 2012.

The personnel files of accused priests have previously been made public in other American dioceses, including Boston and Los Angeles, generally as a result of litigation. Most of the documents have been published in an online archive, BishopAccountability.org.