By  Maxine Bernstein, The Oregonian 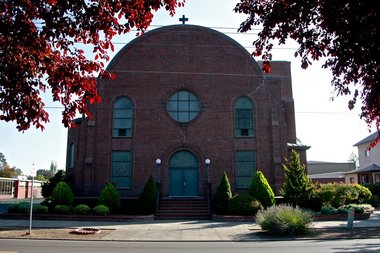 It was close to midnight Sunday when Woodburn resident James Curths saw the 12-year-old boy running down the street toward him. Curths said the child, panting and out of breath, begged for help, telling him a man was chasing him.

Moments later, a man rounded the corner wearing only underwear. He stood a short distance away, trying to wave the boy over as Curths and his sister-in-law prepared to drive the boy to relatives.

“He was staring at us,” said Heather Rodriguez, 28, Curths’ sister-in-law, who was also outside. “Then he stood there with his hands on his hips like, ‘You’re really not going to give him to me?'”

Rodriguez and Curths, 35, told the man they were calling the police. Only then, they said, did the man jog away.

The man who chased after the boy that night, Woodburn police say, was the Rev. Angel Armando Perez, the parish priest at St. Luke Catholic Church in Woodburn. Early Monday, the boy gave police a detailed account of the alleged sex abuse he said occurred at Perez’s home, leading to Perez’s arrest later Monday.

Court records released Tuesday detail the alleged abuse and the pastor’s actions after the incident.

Perez was arraigned in Marion County Circuit Court on Tuesday, appearing via video from Marion County Jail, wearing a black V-neck top with his hands secured in front of his waist. He faced allegations of first-degree sexual abuse, abuse of a child in the display of sexually explicit conduct, furnishing alcohol to a minor and driving under the influence of intoxicants.

The Salem boy told authorities that Perez had asked his parents a few days earlier if he could take him on a trip to the mountains. He and his family attended a community church event Sunday night, and the 12-year-old went with Perez that night to the pastor’s house, a grayish-green home less than 200 paces from the church’s front door.

The boy told police Perez gave him a beer and they watched a movie. The boy told investigators that an air mattress was set up on the living room floor for him to sleep on. He said he fell asleep on the mattress, the affidavit said.

Later, the boy said, he was “woken up by a couple of flashes.”

He said that when he opened his eyes, he saw Perez next to the air mattress, with one hand on the boy’s genitals and one hand holding a cellphone. The boy discovered his underwear and shorts lowered to his knees, while Perez was dressed in underwear and a T-shirt, the boy told police.

The boy said he went to pack up his things when Perez went upstairs. “Father Angel called to him saying, ‘Come back to bed,'” the police affidavit says.

Instead, the boy said goodbye and ran off.

Curths, who was hosting a barbecue when the boy showed up outside his house, said he looked distraught. “He just seemed really terrified, and he was almost in tears,” Curths said.

When the pastor caught up to the boy outside Curths’ house, wearing what Curths and his sister-in-law said looked like a burgundy Speedo swimsuit, the boy hid behind Curths.

“He was scared to death,” Curths said. “It was like someone running from a ghost.”

Curths said the boy told him that the man had “touched his privates.”

James Curths, 35, said the boy looked “like someone running from a ghost.”

Curths drove the boy to his sister’s house, where the boy told his sister what had happened, the affidavit said.

According to the affidavit, the boy told her, “Father Angel touched me in my privates.”

He was shaking and appeared scared, the sister told authorities. The boy’s sister alerted her mother, and his father drove to pick up the boy.

“I made a mistake”

Meanwhile, according to the affidavit, Perez had driven to the boy’s home in Salem to talk to the boy’s mother and brother about 2 a.m. Monday.

Perez had a strong odor of alcohol and appeared intoxicated, the brother of the alleged victim told police.

The brother told police that Perez’s first statement was, “I am very sorry; I made a mistake.”

Perez continued to ask forgiveness, and added, “I didn’t mean to hurt” the child, the boy’s brother told police.

“I am just one who serves in the church, and I have sinned; don’t stop believing in the church,” Perez reportedly told the victim’s brother, according to the affidavit.

Perez also offered to let the boy’s mother and brother check his phone, saying, “You won’t find anything,” the affidavit said. The relatives asked Perez to leave the house.

“This is the last time you will see me,” Perez said before leaving, the brother told police.

Perez told them he drank too much at the community event. He said he and the boy were given a ride back to his Woodburn home. There, Perez said, he drank another beer, and they watched a movie, the affidavit said.

He told police “at some point he blacked out and doesn’t remember what happened,” the affidavit said.

Perez told Woodburn Detective Sgt. Nick Wilson that he remembered going upstairs and brushing his teeth, and when he came downstairs, he recalled a look of “disappointment and anger” on the boy’s face, the affidavit said.

Perez, the affidavit said, admitted he drove intoxicated to the boy’s home to apologize and find out what happened. He said he dropped to his knees and begged for forgiveness.

A Catholic priest has been arrested on child sex abuse charges.

The Rev Angel Armando Perez, 46, the parish priest at St Luke Catholic Church in Woodburn, Oregon, was arrested on Monday after police responded to a complaint about inappropriate contact with a 12-year-old boy.

Perez faces accusations of sexual abuse, use of a child in a display of sexually explicit conduct and furnishing alcohol to a minor. 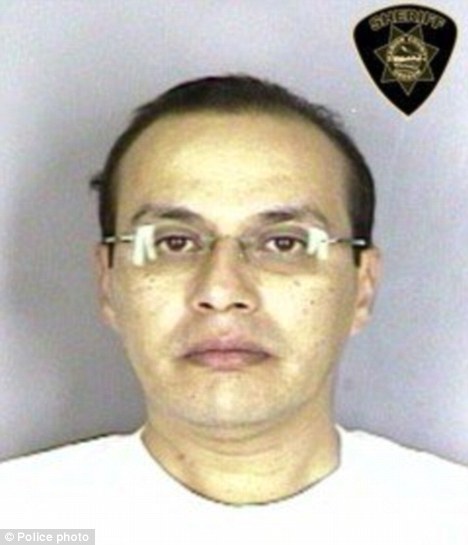 Accused: The Rev Angel Armando Perez, 46, of St Luke Catholic Church was arrested for the sexual abuse of a 12-year-old boy

Mexico-born Perez has been pastor of St Luke Parish since 2008.

The details of the allegations and investigation were not immediately disclosed.

Perez was said to be a popular priest that everyone flocked to.

Bud Bunce, a spokesman for the archdiocese, told The Oregonian: ‘Any time allegations like this are made, it’s a tragedy for everyone involved, potential victims, priests, for everyone.’

Monsignor Gregory Moys, a pastor at St Paul Roman Catholic Church in St Paul who Perez was an assistant for said of the allegations: ‘What he’s being accused of is unsettling, that’s for sure. But we all have weak links in our human nature.’

In a 2002 profile of Perez in The Oregonian, Perez  recounted a sermon in Corvallis in which he told his parishioners: ‘I said to to them, my faith is very strong, that even though we have these problems in the church right now, these sex scandals, I really believe the Holy Spirit sustains us.’

SALEM, Ore. — A Woodburn priest was arrested for sexually abusing a 12-year-old boy at his home following a church party, according to a probable cause affidavit released Tuesday.

Forty-six-year-old Angel Armando Perez pleaded not guilty in Marion County Court today to one count each of first-degree sex abuse, using a child in display of sexually explicit conduct and furnishing alcohol to a minor.

Perez, who has served as pastor of Saint Luke Catholic Church since 2008, was placed on paid administrative leave by the Archdiocese of Portland.

According to documents filed by Woodburn police, Perez and the alleged victim attended a church party Sunday night before returning to Perez’s Woodburn home, where the victim was to spend the night.

Perez gave the victim a beer, and they watched a movie before the victim fell asleep on an air mattress in Perez’s living room. The victim told police he awoke early Monday morning to find Perez, naked from the waist down, touching the victim’s genitals and snapping pictures with a cell phone.

The boy got up and fled the house, the affidavit reads. While running down the street, he turned around to see Perez chasing him in his underwear. He told investigators he eventually found some people standing in a driveway and asked them for help, at which point he turned around and found Perez was gone. One of the people then drove him to his sister’s Woodburn home.

At 2 a.m. that same morning, Perez allegedly showed up at the victim’s Salem home and spoke with his brother. The victim’s brother told investigators that Perez smelled of alcohol as he repeatedly apologized and begged for forgiveness. He also offered to have the family look at his cell phone, which they refused, the court documents state.

The affidavit says that in his interview with detectives later that day, Perez alleged that he drank too much at the party. He said that he blacked out while he and the victim were watching a movie. Perez told investigators he went upstairs to brush his teeth, and when he came back down there was a look of “disappointment and anger” on the victim’s face.

According to church officials, Perez passed a criminal background check, and has no history of abuse allegations. His 16-year career with the Archdiocese of Portland began at Saint Anne in Grants Pass in 1996. In 2002, he moved to St. Mary’s in Corvallis. In 2006 he again transferred to Saint Monica in Coos Bay, until his latest move to Saint Luke four years ago.

A judge ordered that Perez be held without bail in Marion County Jail. His next court hearing is scheduled for Aug. 20.

— Carla Castaño contributed to this report.