PHILADELPHIA (AP) — A Roman Catholic monsignor who became the first U.S. church official branded a felon for covering up sex abuse claims against priests was sentenced Tuesday to three to six years in prison.

Monsignor William Lynn of Philadelphia, the former secretary for clergy at the Archdiocese of Philadelphia, handled priest assignments and child sexual assault complaints from 1992 to 2004.

Judge M. Teresa Sarmina said that Lynn enabled “monsters in clerical garb … to destroy the souls of children, to whom you turned a hard heart.”

She added: “You knew full well what was right, Monsignor Lynn, but you chose wrong.”

A jury convicted him last month of felony child endangerment for his oversight of now-defrocked priest Edward Avery, who is serving a 2½- to five-year sentence after pleading guilty to sexually assaulting an altar boy in church.

Lynn’s lawyers sought probation, arguing that few Pennsylvanians serve long prison terms for child endangerment and their client shouldn’t serve more time than abusers. Defense attorneys, who have vowed an appeal of the landmark conviction, said the seven-year maximum term advocated by the commonwealth “would merely be cruel and unusual.”

The 61-year-old Lynn was acquitted of conspiracy and a second endangerment count involving a co-defendant, the Rev. James Brennan. The jury deadlocked on a 1996 abuse charge against Brennan, and prosecutors said Monday that they would retry him.

In 1992, a doctor told Lynn’s office that Avery had abused him years earlier. Lynn met with the doctor and sent Avery for treatment — but the church-run facility diagnosed him with an alcohol problem, not a sexual disorder. Avery was returned to ministry and sent to live at the northeast Philadelphia parish where the altar boy was assaulted in 1999.

Prosecutors who spent a decade investigating sex abuse complaints kept in secret files at the archdiocese and issued two damning grand jury reports argue that Lynn and unindicted co-conspirators in the church hierarchy kept children in danger and the public in the dark.

Lynn’s attorneys have long argued that the state’s child endangerment statute, which was revised in 2007 to include those who supervise abusers, should not apply to Lynn since he left office in 2004.

Msgr. Lynn sentenced to three to six years in prison

Msgr. William J. Lynn was sentenced to three to six years in prison for failing to take steps that might have prevented a priest from sexually assaulting a 10-year-old altar boy.

Lynn, 61, has been jailed since his June 22 conviction.

His sentencing followed an unprecedented three-month trial that exposed decades of child-sex abuse by Archdiocese of Philadelphia priests, and showed how church leaders sometimes shuffled accused clerics to hide the misconduct from the public.

As the secretary for clergy to Cardinal Anthony J. Bevilacqua, Lynn spent a dozen years managing area priests’ assignments and investigating claims of misconduct, including allegations of child-sex abuse.

A jury convicted him of child endangerment for allowing Edward Avery, a former parish priest, to remain in active ministry in the mid-1990s after learning that Avery had once molested a minor. The jury acquitted him of two other counts, including a charge that he conspired with church leaders and Avery to endanger children.

Avery, defrocked six years ago, pleaded guilty in March to charges that he sexually assaulted an altar boy at St. Jerome Church in Northeast Philadelphia in 1999.

In testimony at his own trial, Lynn maintained that he did his best – and much did more than his predecessors – to isolate suspect priests. But he said he was hampered by church policies and a lack of authority.

He had arranged for Avery to be removed as pastor of a Mount Airy parish in 1992 and hospitalized for evaluation after a medical student came forward to say the priest molested him in the late 1970s. Avery denied the allegation, but Lynn still labeled him as “guilty of sexual misconduct with a minor” on a confidential list of suspected and confirmed pedophile priests he compiled for Bevilacqua in 1994.

Avery was later returned to ministry and limited to work as a chaplain at Nazareth Hospital and expected to be monitored by an “aftercare” team. But he was allowed to live in the rectory and celebrate Mass at the Northeast Philadelphia parish where he later molested the boy.

Lynn’s lawyers argued that only the cardinal had the authority to move or remove priests.

In a motion to the judge last week, they urged her to consider a sentence of probation or less than a year in county jail, contending that Lynn had already endured an unprecedented amount of shame and vilification.

“The last ten years of his life were a time of reflection, penance and rehabilitation,” lawyers Thomas Bergstrom and Jeffrey Lindy wrote.

They also asked that he be released on bail while they appeal the verdict.

Lynn left the clergy office in 2004 to become pastor of St. Joseph Church in Downingtown. He was suspended from that post after his arrest last year. More than 300 of his supporters submitted letters to the judge in advance of the sentencing.

Prosecutors from the office of District Attorney Seth Williams asked Sarmina to impose the maximum term, arguing that Lynn’s crimes were more severe than the typical child endangerment felony. They said his actions – and inaction – as clergy secretary ultimately impacted thousands of Catholics across the region.

Philadelphia Monsignor Gets Up to Six Years in Prison

PHILADELPHIA—A Roman Catholic monsignor was sentenced Tuesday to as many as six years in prison for allowing a priest suspected of sexual misconduct with a minor to have continued contact with children.

A jury last month found Monsignor William Lynn guilty of child endangerment. The verdict marked the first time a senior U.S. church official was convicted of a criminal charge related to allegations of covering up sexual abuse of minors by other priests. Msgr. Lynn, 61, served as secretary for clergy in the Archdiocese of Philadelphia from 1992 to 2004, a job that included investigating abuse allegations lodged against priests in the diocese. 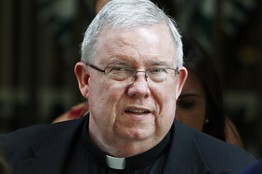 ReutersMonsignor William Lynn, shown in June, was sentenced to six years in prison for allowing a priest suspected of sexual misconduct with a minor to have continued contact with children.

Msgr. Lynn’s three- to six-year prison sentence is another milestone in a sex-abuse scandal that has shaken the Church in the U.S. and elsewhere for the past decade. Victims’ groups heralded his conviction as an opening for law-enforcement officials in other cities to look anew at whether other high-ranking church officials could be held criminally liable for looking the other way when priests under their charge were accused of abuse.

The sentencing comes as the Catholic Church braces for another clergy-abuse trial set for September in Missouri. Kansas City, Mo., Bishop Robert Finn, the highest-ranking church official to be indicted on a charge of allegedly failing to protect children, is awaiting trial on a misdemeanor criminal charge that he failed to report a priest found with child pornography. Bishop Finn has pleaded not guilty.

During a three-month trial in Philadelphia Court of Common Pleas, prosecutors presented evidence that in the 1990s Msgr. Lynn recommended a new assignment for a priest, Edward Avery, to live in a rectory near a church school despite having determined that Mr. Avery was involved in sexual misconduct with a boy several years earlier. In his new assignment, Mr. Avery sexually assaulted a 10-year-old altar boy in 1999; the now-defrocked priest is serving as many as five years in prison after pleading guilty in March to involuntary deviate sexual intercourse and conspiracy.

Philadelphia prosecutors asked Judge M. Teresa Sarmina for the maximum sentence of 3½ years to seven years for Msgr. Lynn, saying in a memo that his “crime is off the charts.” They said Msgr. Lynn endangered not only Mr. Avery’s victim, but also hundreds of other children at the parish where he lived. Prosecutors also said Msgr. Lynn hadn’t demonstrated remorse and had failed to understand the criminality of his actions.

“A maximum sentence may be the only way to impress upon defendant that he committed a serious crime, that there are more important rules to follow than instructions from corrupt or misguided bishops, and that the protection of children trumps the reputation of abusers and the institution that harbors them,” said the memo from the Philadelphia district attorney’s office.

Msgr. Lynn’s defense attorneys asked in a memo for a sentence of time served, probation, work release or house arrest, which would ensure he could “still use his priestly gifts to improve the lives of those around him.” Msgr. Lynn has been jailed since his conviction on June 22.

Defense lawyers argued that he poses no danger to the public and has never been accused of inappropriately touching a child. They said he has led a life of selflessness in his 36 years as a priest, citing letters of support written by friends, family and parishioners from churches at which he has served.

During his trial, Msgr. Lynn testified that he did his best to investigate sex-abuse claims but he had limited authority to take action against accused priests. He said he was sorry that his actions failed to prevent Mr. Avery from abusing the boy in 1999.

—Steve Eder and Jennifer Levitz contributed to this article.