By Brendan O’Brien and Geoffrey Davidian 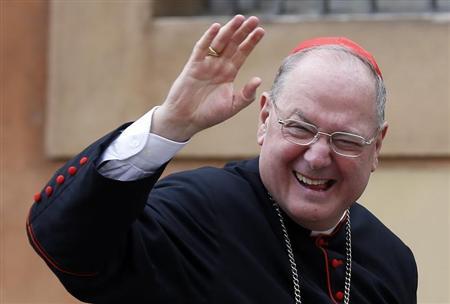 The documents include letters and deposition testimony from Cardinal and Archbishop of New York Timothy Dolan who, during his time as archbishop of Milwaukee from 2002 to 2009, appealed to Vatican on numerous occasions to help address the ongoing fallout from the scandal.

The 6,000 pages of documents related to eight decades of abuse cases showed in great detail the Milwaukee archdiocese regularly reassigned priests who were accused of sexual molestation to new parishes and Dolan himself asking the Vatican permission to transfer $57 million to a trust fund to protect it against court action.

In 2011, the Milwaukee archdiocese filed for Chapter 11 bankruptcyprotection, citing the financial drain of settling sexual-abuse claims and acknowledging missteps by the church in dealing with pedophile priests.

The judge overseeing the archdiocese’s bankruptcy ordered the documents to be released.

The Roman Catholic Church has been hit with a series of abuse accusations and scandals during the past two decades, in the United States and elsewhere. The scandals have cost the U.S. church about $3 billion in settlements and driven prominent dioceses such as the one in Milwaukee, into bankruptcy.

One document is a letter that Dolan sent to the Vatican in June 2007 requesting permission to move $57 million into a cemetery trust fund in order to protect the funds from “any legal claim and liability.” The Vatican approved the transfer a month later, according to the documents.

During a news conference on Monday, Jeff Anderson, an attorney representing more than 500 abuse victims, said the money was to be used to “pay off some of the offenders to quietly go away.”

Dolan disagreed with the characterization of the fund in a statement released on Monday. He said it was a “perpetual care fund” from for cemeteries, not an attempt to shield money from bankruptcy.

Milwaukee is the eighth American diocese to declare bankruptcy, with the first three filed in 2004 in Portland, Oregon; Tucson, Arizona; and Spokane, Washington.

The documents also showed that when Dolan, the president of the U.S. Conference of Catholic Bishops and the nation’s most prominent Roman Catholic official, asked the Vatican to remove priests, it was slow to respond.

In September 2003, Dolan informed the Vatican of abuse by Reverend John O’Brien, who sent a resignation letter to Pope John Paul II a month before, according to the documents.

In November 2003, when he had received no response, records show that Dolan followed up with more two accounts of abuse on the part of O’Brien, according to a document.

It was not until April 2009, that O’Brien was removed from the priesthood.

Documents also show the Milwaukee archdiocese transferring pedophile priests instead of removing them from the church.

In one such case, Reverend Raymond Adamsky received counseling and was transferred to 11 parishes in 34 years before being sent to serve as nursing home chaplain with restrictions on contact with minors, after he was accused of molestation in 1961 and then again in 1983, the documents show.

The documents also detail the Milwaukee archdiocese, on a regular basis, requested priests accused of abuse be laicized, a process in which they are stripped of their powers and duties.

As part of their laicization, priests such as O’Brien were paid $10,000 to start the process and $10,000 during the process and, in some cases, $1,250 per month for health and dental insurance, according to the documents.

MILWAUKEE –  The Archdiocese of Milwaukee has released thousands of pages of documents related to clergy sex abuse as part of a deal reached in federal bankruptcy court between the archdiocese and abuse victims suing it for fraud. Here is a look at what is in the documents:

WHAT’S IN THE DOCUMENTS?

The approximately 6,000 pages of documents released by the Milwaukee archdiocese include personnel files for 42 priests with substantiated allegations of sexual abuse against them, along with depositions of church leaders including New York Cardinal Timothy Dolan, the former archbishop of Milwaukee, and other records. The documents show that archdiocese officials struggled to deal with problem priests, sending them to treatment and then reassigning them to new parishes where no one would know their histories, before eventually concluding the best route was to remove them from the priesthood.

WHY DID THE ARCHDIOCESE OF MILWAUKEE DECIDE TO RELEASE THEM?

The archdiocese released the files as part of a deal with victims suing it in federal bankruptcy court for fraud. Jerry Topczewski, chief of staff for Archbishop Jerome Listecki, said the archdiocese had been reluctant to release the files because of privacy concerns for the victims, those reporting crimes, officials handling the cases and others. But he said the archdiocese eventually realized that unless it made the records public, some victims would not agree to a bankruptcy settlement.

WHAT’S NOT IN THE DOCUMENTS?

Victims have complained that the documents represent only about 10 percent of what the archdiocese turned over to the victims’ attorneys during litigation. The rest of the files remain under a court seal. Victims say they want to see those as well because sexual abuse allegations also have been made against teachers in Catholic schools, choir directors and priests assigned to religious orders, not the archdiocese.

WHAT IS DOLAN’S ROLE?

Dolan led the Milwaukee archdiocese from June 2002 to February 2009, when he was appointed archbishop of New York. Dolan took over as a national clergy sex abuse scandal was growing and oversaw efforts to remove some problem priests from the priesthood. Questions also have been raised about his actions leading up to the archdiocese’s bankruptcy and whether he tried to protect some church assets by moving money for cemetery care into a trust.

The release of the documents removes a stumbling block to a bankruptcy settlement but doesn’t affect the case’s legal status. The archdiocese must still file a plan detailing how it expects to operate and provide for victims in the future.

Attorneys representing scores of people who say they were sexually abused by priests and their welfare ignored by a religious order bent on preserving its reputation at children’s expense cautioned the public “prepare to be shocked.”

The Milwaukee Journal Sentinel reported the 6,000 pages of documents, released Monday afternoon, contain details on how bishops and others in charge of the diocese over the years, including Cardinal Timothy Dolan, now archbishop of New York City and previously head of the Milwaukee diocese, handled the allegations.

They said many of the documents will show decades of indifference to allegations of sexual impropriety by priests and a hierarchy that moved priests from one mission to another without warning parishioners or the police about a priest’s history as a pedophile.

Some of the documents relate to two of the Catholic Church’s most notorious sex abusers: the Rev. Lawrence Murphy, who is believed to have molested as many as 200 deaf boys during his decades at St. John School for the Deaf; and Sigfried Widera, who jumped from a hotel balcony in Mexico in 2003 as authorities closed in after charging him with 42 counts of child sex abuse in Wisconsin and California.

Dolan, who headed the diocese for six years, said he welcomed his deposition becoming public and said for more than a decade the Milwaukee diocese has been up front and transparent about the problem of priest sexual abuse.

“One of the principles that guided me during that time was the need for transparency and openness, which is why I not only welcomed the deposition as a chance to go on-the-record with how we responded to the clergy sexual abuse crisis during my years in Milwaukee, but also encouraged that it be released,” Dolan said in a statement released by the New York archdiocese.

The Milwaukee diocese filed for Chapter 11 bankruptcy protection in January 2011, a form of bankruptcy protection that allows the debtor to negotiate settlements with creditors, in this case the sex abuse victims who have filed lawsuits, while still remaining financially viable as an organization.