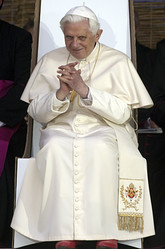 For the most part, the U.S. government has stayed on the sideline while big-ticket litigation against the Vatican over sex-abuse claims has played out.

But you can rest assured that folks at the U.S. State Department are paying close attention. After all, it’s not every day that litigation against a foreign nation makes its way to the steps of the Supreme Court.

In a filing made late last week, the U.S. government weighed in, largely siding with the Vatican’s argument that the Ninth Circuit erred by allowing a sex-abuse case to go forward against the Vatican. The move represented a rare foray by Washington into the highly sensitive litigation.

The lawsuit, Doe v. Holy See, was filed in 2002 on behalf of a man who claimed he was sexually abused by a priest in Oregon in the mid-1960s. The plaintiff named the Holy See as a defendant, in addition to a handful of other parties.

The plaintiff’s theory: Since the accused priest had previously been accused of abusing children in Ireland and Chicago, the Vatican should be held accountable for moving the priest to Oregon and continuing to let him serve, where it was conceivable he would continue to abuse. Jeffrey Lena, attorney for the Vatican, noted that the plaintiff has not provided evidence that the Vatican moved the priest in question around, or had control over the priest.

Specifically, the solicitor general’s office argued in its brief that the Ninth Circuit misapplied the Foreign Sovereign Immunities Act, a 1976 federal law governing when U.S. courts can hear cases against other countries.

Commenting on the brief, David Bederman, an international-law expert at Emory University School of Law, said that, “the door may still be cracked a bit,” for the plaintiff, “but there’s not a lot of daylight showing.”

Jeffrey Anderson, the lawyer for the plaintiff, called the Solicitor General’s brief “a little perplexing,” but said he remained heartened that the government didn’t recommend more-drastic action, such as dismissing the case altogether.