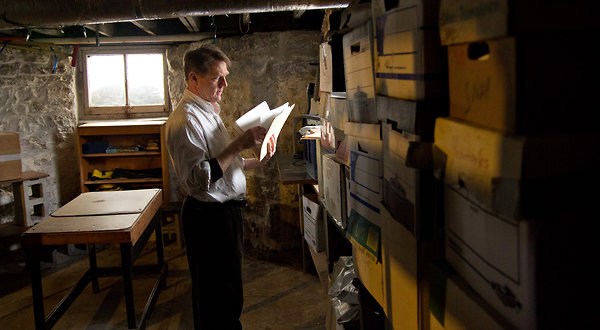 Dan Gill for The New York Times:  David Clohessy keeps records from his advocacy group, known as SNAP, in his St. Louis home.

Turning the tables on an advocacy group that has long supported victims of pedophile priests, lawyers for the Roman Catholic Church and priests accused of sexual abuse in two Missouri cases have gone to court to compel the group to disclose more than two decades of e-mails that could include correspondence with victims, lawyers, whistle-blowers, witnesses, the police, prosecutors and journalists.

The group, the Survivors Network of those Abused by Priests, known as SNAP, is neither a plaintiff nor a defendant in the litigation. But the group has been subpoenaed five times in recent months in Kansas City and St. Louis, and its national director, David Clohessy, was questioned by a battery of lawyers for more than six hours this year. A judge in Kansas City ruled that the network must comply because it “almost certainly” had information relevant to the case.

The network and its allies say the legal action is part of a campaign by the church to cripple an organization that has been the most visible defender of victims, and a relentless adversary, for more than two decades. “If there is one group that the higher-ups, the bishops, would like to see silenced,” said Marci A. Hamilton, a law professor at Yeshiva University and an advocate for victims of clergy sex crimes, “it definitely would be SNAP. And that’s what they’re going after. They’re trying to find a way to silence SNAP.”

Lawyers for the church and priests say they cannot comment because of a judge’s order. But William Donohue, president of the Catholic League for Religious and Civil Rights, a church advocacy group in New York, said targeting the network was justified because “SNAP is a menace to the Catholic Church.”

Mr. Donohue said leading bishops he knew had resolved to fight back more aggressively against the group: “The bishops have come together collectively. I can’t give you the names, but there’s a growing consensus on the part of the bishops that they had better toughen up and go out and buy some good lawyers to get tough. We don’t need altar boys.”

He said bishops were also rethinking their approach of paying large settlements to groups of victims. “The church has been too quick to write a check, and I think they’ve realized it would be a lot less expensive in the long run if we fought them one by one,” Mr. Donohue said.

However, a spokeswoman for the United States Conference of Catholic Bishops, Sister Mary Ann Walsh, said Mr. Donohue was incorrect.

“There is no national strategy,” she said, and there was no meeting where legal counsel for the bishops decided to get more aggressive.

Mr. Clohessy and others founded the survivors network as a loose collective of volunteers who had been victimized by Catholic priests. Their goal was to help others grapple with the emotional and psychological fallout. They make referrals to therapists and lawyers, and hold protests outside church offices.

The group has three paid staff members, two part-time administrators and volunteers who lead 55 chapters in the United States and about 8 overseas. Its total revenue for 2010 was $352,903, some of it donations by lawyers who have sued the church. The group says it has spent about $50,000 and hundreds of hours of staff time since the subpoenas began, and is now arranging for lawyers who will work pro bono.

When the scandal over clergy sexual abuse reached a peak in Boston in 2002, American bishops met at their conference in Dallas with network members who gave emotional testimony about the toll of the abuse. But relations have deteriorated since then, and SNAP members say bishops now refuse to meet with them.

The first indication that the network would be caught up in legal proceedings came from Kansas City, where Bishop Robert W. Finn last year became the first American bishop ever to be criminally indicted for failure to report suspected child abuse.

Mr. Clohessy received a subpoena in October at his St. Louis home, where he works, regarding the case John Doe B.P. v. the Rev. Michael Tierney and the Diocese of Kansas City-St. Joseph.

Four plaintiffs are accusing Father Tierney of sexually abusing them years ago. The cases would be outside the statute of limitations in Missouri, but the plaintiffs contend they recovered their memories of abuse only recently.

The subpoena asked that Mr. Clohessy turn over all documents in the last 23 years that mention repressed memory, any current or former priest in Kansas City, the diocese, Father Tierney, John Doe or Rebecca Randles, the attorney for the plaintiffs.

The church’s lawyers say they need to see SNAP’s records to investigate whether Ms. Randles violated a gag order by giving the group information about one of the Tierney cases before it was filed, which the group then included in a news release.

Ms. Randles said in an interview: “I certainly didn’t violate the gag order that is based on the ethics rules. And I did get an informal opinion from the Missouri bar ethics council indicating that it was acceptable to give an advance copy of the petition as long as my client had given me permission to do so.”

However, Judge Ann Mesle of Missouri Circuit Court in Jackson County ruled that Mr. Clohessy must release the files and be deposed because he “almost certainly has knowledge concerning issues relevant to this litigation”

Mr. Clohessy was deposed in January by lawyers for five accused priests and the diocese. In the 215-page transcript, made public on March 2, most of the questions were not about the case but about the network — its budget, board of directors, staff members, donors and operating procedures.

Mr. Clohessy testified that he had never had contact with John Doe.

“It was not a fishing expedition,” Mr. Clohessy said. “It was a fishing, crabbing, shrimping, trash-collecting, draining the pond expedition. The real motive is to harass and discredit and bankrupt SNAP, while discouraging victims, witnesses, whistle-blowers, police, prosecutors and journalists from seeking our help.”

Many of the questions were intended to prove that the group does not meet the definition of a rape crisis center. If it did, the group’s records would be shielded under a Missouri statute.

In a damaging admission, Mr. Clohessy answered, “Sure,” when asked whether his group had ever issued a press release that contained false information. In an interview on Monday, he said his response had been an acknowledgment that there must have been some errors in the thousands of news releases and alerts that the group had sent out over the years, “but never intentionally, and never mistakes of substance.”

While Mr. Clohessy was being deposed, another network employee in St. Louis, Barbara Dorris, received a subpoena involving the case of Jane Doe 92 v. the Archdiocese of St. Louis, et al.

That subpoena was nearly identical to the one issued to Mr. Clohessy, said Ken Chackes, the attorney for Jane Doe. It requested all correspondence about repressed memory even though the Jane Doe case does not involve repressed memory.

Mr. Chackes said, “I assume there’s some kind of communication” between the church lawyers in the two cities.

In the Kansas City case, SNAP refused to turn over all the subpoenaed documents or answer all the questions in the deposition. So attorneys for the church and the priests have filed a motion to compel SNAP to comply. A hearing on the motion is scheduled for April 20.

The experience has sent a chill through the network’s volunteers, Ms. Dorris said. “They want to do what’s right, and they want to help others, but this is a threat,” she said. “I think for some it’s strengthened their resolve, but others are scared.”