What Some Churches are Doing to Protect Children 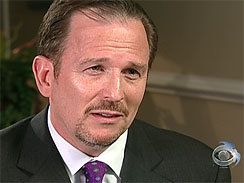 Mark Serrano, who was abused by a priest starting when he was 9 years old.  (CBS)

“Father Hanley was friendly, put his arm around me, and just said, ‘I hear you’ve been acting up in class, and you know, you got to stop giving the nuns a hard time. Tell you what, why don’t you come and see me at the rectory,'” Serrano said.

A gregarious priest, Hanley worked slowly to gain Serrano’s trust and the trust of Serrano’s parents, Pat and Lou.

“In individual visits, Father Jim would sit me on his lap, pull out the Hustler magazine and he would give me basically a sex education course,” Serrano said.

The molestation escalated to sexual acts, which he kept secret from his parents. He escaped the abuse at age 14 when he graduated from St. Joseph’s.

“I was no match for a cunning predator,” Serrano said. “That’s what he was.”

The Catholic Church has struggled to come to grips with abuse cases like Mark Serrano’s. But U.S. church officials insist they are learning from past mistakes and have implemented abuse awareness programs and more rigorous screening measures.

“It’s probably the worst thing to think that a child was abused, and that’s something that should never happen,” said Susan Gibbs, director of communication for the Washington Archdiocese.

The Archdiocese of Washington is tackling the problem on multiple fronts.

Everyone from priests to secretaries and church volunteers are required to attend a three-hour sex abuse awareness program. It details the warning signs of abuse, like a sudden change in a child’s behavior. It also explains how child predators target their victims. More than 40,000 have attended so far. They must submit to a criminal background check through an electronic fingerprinting process which is matched against the FBI’s national database. The program reaches into schools as well, to teach children how to recognize and respond to inappropriate behavior.

But there were no protections for Mark Serrano in the 1970s. He tried reporting the abuse to church officials and state authorities, but Hanley remained a priest. Later he admitted to abusing Serrano and 11 other boys and was defrocked.

“Do you think you could ever return to the church?” Quijano asked.

“As the structure is changed, as soon as bishops are held accountable for enabling sex offenders to molest and rape children,” Serrano said. “And I don’t believe that it will take place in my lifetime or my children’s lifetime, unfortunately.”

His faith in Catholicism now shattered – a deep-seated pain that the church is trying to both heal and prevent.