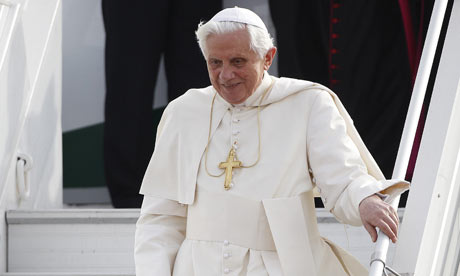 As Pope Benedict XVI flew to Malta yesterday for his first overseas visit since the eruption of the latest clerical abuse scandal to rock the Roman Catholic church, it emerged that new claims were to be made of a cover-up operation to clear him of responsibility.

A report in the German news magazine Der Spiegel, to be published tomorrow, will say that a former aide was put under “heavy” pressure to take the blame for an abuse scandal in the pope’s former archdiocese of Munich and Freising. In 1980, while the then Cardinal Joseph Ratzinger was archbishop, a priest known to be a paedophile was accepted into the archdiocese and, instead of being given therapy as planned, he was swiftly assigned to parish duties.

After the case was brought to light by the New York Times last month, Benedict’s former vicar-general in Munich, Gerhard Gruber, accepted “full responsibility” for the decision.

According to Der Spiegel, citing sources very close to the 81-year-old prelate, Gruber received a string of telephone calls in which church officials “begged” him to take the blame. After he agreed, he was sent a fax containing the statement that he eventually issued, the weekly will say. The priest, Father Peter Hullermann, went on to commit an offence involving a boy for which he was tried and convicted.

In Spain, meanwhile, it was reported that a cardinal who congratulated a French bishop on not reporting a paedophile abbot said he had cleared his message of congratulations with the late pope, John Paul II. La Verdad, a newspaper in the southern city of Murcia, said that Cardinal Dario Castrillón Hoyos told a press conference in the city on Friday that he wrote a letter to the bishop “after consulting the pope and showing it to him”.

The cardinal added that the late pontiff “authorised me to send the letter to all the bishops in the world and put it on the internet”.

The pope flew out of Rome after receiving an unexpected and unconditional endorsement from Silvio Berlusconi’s government. In greetings sent to the pontiff on his 83rd birthday on Friday, the Italian government blamed the scandal on an “unspeakable campaign of slander against the church and the pope”.

The statement was one of several indications that Benedict’s supporters were shifting from defence to attack in their run-up to the fifth anniversary of the start of his papacy tomorrow.

A junior minister at the Italian ministry of culture, Francesco Giro, was joined by six other members of parliament and numerous regional, provincial and local councillors in a special prayer service for the pope yesterday in Rome.

Critics and supporters alike will be watching to see if Benedict uses his visit to Malta to comment on the continuing scandal and meet local abuse victims.

Some 2,000 police and military have been deployed by the government to ensure the pope’s security during his two-day visit to the island where St Paul is believed to have been welcomed after a shipwreck on his way to Rome. Tradition has it that he landed on Malta 1,950 years ago, and last night Benedict was due to pray at the grotto where, according to tradition, the apostle took refuge.