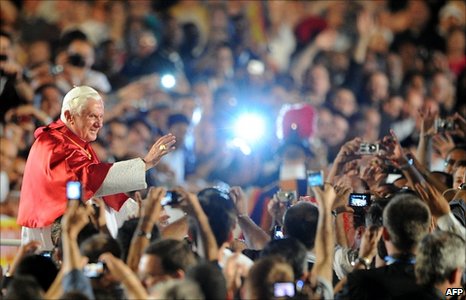 The Pope received a rapturous reception from the crowd of priestsPope Benedict XVI has strongly defended the Catholic Church’s rule of celibacy for priests, speaking to 10,000 priests in St Peter’s Square in Rome.

He called it a sign of faith in an increasingly secular world.

But the Pope made no reference to the paedophile priests scandal that has rocked the Church in recent months.

The rally of priests from more than 90 nations was one of the largest gatherings of clergy ever seen at the Vatican.

The evening gathering marked the end of the Catholic Church’s international year of the priest.

The Pope is due to celebrate a final Mass on Friday.

TV link-upAlthough most of the clergy present were Italians, the priests came from more than 90 different nations countries.

In a satellite TV link-up, priests working in different parts of the world also spoke of their work.

Pope Benedict spent 40 minutes answering questions from five priests – one from each continent – but he made no reference to the paedophile priest scandals.

However, a front page editorial in the Vatican newspaper, Osservatore Romano, commented that the wounds caused by clerical sexual abuse would take time to heal.

The BBC’s David Willey, in Rome, says that the atmosphere at the Vatican as the international year of the priest ends is decidedly upbeat.

This is despite the Pope’s frank admission that the diminishing number of new vocations for the priesthood is a worrying trend in many parts of the world, our correspondent adds.