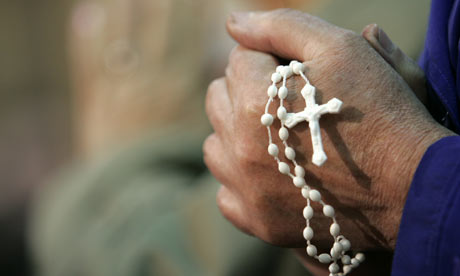 Many Catholics across Europe say the sex abuse scandal has robbed them of their faith. Photograph: Danilo Krstanovic/Reuters

Vatican officials fear the clerical sex abuse scandal could have a devastating effect on the finances of the Italian church, undermining what until now has been a bastion of the faith.

Italian taxpayers have until the end of July to declare their income for 2009 and, under a system in force in several European countries, they can opt for a proportion of their taxes to be paid to the church.

In Italy, 0.8% of income tax revenue is divided between state-run aid organisations and recognised denominations and religions according to the preferences expressed by taxpayers on their returns.

“The media always talk of class actions, compensation for the victims of abuse by the clergy and the legal fees which, since 2001 have forced the American dioceses to sell schools, hospitals, convents and universities,” the daily La Stampa quoted a Vatican source as saying. “But in fact the biggest economic damage is done by the collapse in donations.”

In Italy, among those who expressed a preference, the proportion of taxpayers earmarking a share for the church rose to a peak of 90% in 2004. It fell slightly to 87% in 2008. That percentage was far higher than the proportion attending Mass each Sunday, perhaps because only predominantly middle-class non-wage earners have to fill in a tax declaration. Last year, they earned the church some €900m (£776m) from the state.

With many Catholics across Europe saying the scandals have robbed them of their faith, there is a risk that this year’s income could be much lower. In Germany, where church membership is registered and has a direct impact on church funds, pollsters for Focus magazine this month found that 26% of Catholics were reconsidering their religious allegiance