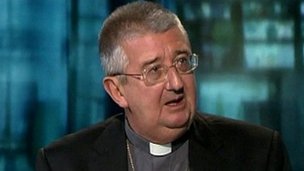 Dr Martin said Smyth’s victims were owed such an inquiry

The Catholic Archbishop of Dublin, Dr Diarmuid Martin, has called for an independent international commission of inquiry into the crimes of paedophile priest, the late Fr Brendan Smyth.

It would be in the public interest that the full story came out, not bits and pieces, he told RTE Radio 1 on Sunday.

His comments follow a week when the Irish Primate came under pressure over his role in a 1975 inquiry into Smyth.

A BBC documentary accused Cardinal Sean Brady of failing to pass on details of children being abused by Smyth to police or parents.

The programme focused on a 14-year-old boy who had been sexually abused by Smyth.

Archbishop of Dublin Diarmuid Martin has called for an independent investigation into past allegations of clerical sex abuse.

As Archbishop Martin spoke out against the past failings of the Church, another bishop defended Cardinal Sean Brady, whose involvement in a secret 1975 probe into allegations of abuse has come under fire.

Archbishop Martin said a commission should be set up to examine all accusations against paedophile priest Brendan Smyth.

“I know it’s not fashionable to talk about commissions, but I believe an independent commission to investigate the activities of Brendan Smyth would be in the public interest, as to how he was allowed to abuse for so many years – north and south, church and state,” Archbishop Martin told RTE.

He said it was the least Fr Smyth’s victims deserve.

But Bishop of Ardagh and Clonmacnoise Colm O’Reilly said while the abuse carried out by Fr Smyth was appalling, Cardinal Brady should not be forced to resign.

A documentary last week revealed that Cardinal Brady, who acted as a note-taker during the probe into allegations against Fr Smyth in the 1970s, had a list of children’s names who were being abused but failed to inform gardaí and the children’s parents.

He has refused to step down from his position as Primate, despite increasing pressure from politicians north and south of the border.

The cardinal gave the information to his superior bishop, but no action was taken against Fr Smyth and he was able to continue abusing children for a further 20 years.

“I feel he should not stand aside,” said Bishop O’Reilly. “I think what he did, he did conscientiously. I have no reason to doubt that. I have great respect for Cardinal Sean Brady.”

The bishop added that had Cardinal Brady, then a teacher in Armagh, given the evidence he had obtained to gardaí, they would have referred him back to the Church.

“I’m not sure the authorities would have been able to take it on themselves,” he said.

The 1975 private probe involved interviews with then 14-year-old Brendan Boland. He told investigators at least five children had been attacked by Smyth.

Fr Smyth continued abusing for a further two decades and it is feared at least another 30 children fell victim to him.

The paedophile was eventually convicted in 1994 in a Belfast court of 17 counts of sexual abuse.

He pleaded guilty to a further 74 counts of child sex abuse three years later in Dublin. He died in prison in 1997.

The Archbishop of Dublin is calling for a full independent inquiry into the activities of paedophile priest Father Brendan Smyth.

It comes in the wake of this week’s BBC documentary, centred on All-Ireland primate Cardinal Sean Brady’s role in the church’s initial investigation in 1975.

The programme included claims that then Fr Brady failed to adequately protect children against the notorious child molester.

Archbishop Diarmuid Martin says a full commission of investigation should take place, covering both Northern Ireland and the Republic.

Cardinal Brady has been facing increasing pressure to step down after it was revealed he had the names and addresses of five children who were abused by Fr Smyth.

He acted as a note-taker during interviews with two of Smyth’s victims. Reports of sexual abuse were not passed on to police are parents.

Some mass-goers at Dublin’s Pro Cathedral on Sunday felt the Cardinal has been left with no option but to give up his role as head of the Catholic Church in Ireland.

One man said: “I think he should resign as I don’t think he really has the moral authority anymore.”

Another woman said: “I’m really sad about it because I like the man – but it is probably best if he does go, under the circumstances.”

Earlier this week, Tánaiste Eamon Gilmore called for anyone who did properly deal with allegations of child abuse against paedophile to step down.

The Labour TD said: “It is my personal view that anybody who did not deal with the scale of the abuse that we have seen in this case should not hold a position of authority.”

Cardinal Brady is due to retire in 2014.