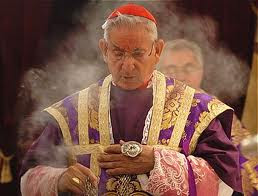 The Vatican response to the Irish government criticism of its actions on child abusing priests is simply pathetic.

The Irish government needs to stand firm and not be cowed by this Vatican response which is utterly deceitful.

Prime Minister Enda Kenny has absolutely nothing to apologize for.

The Vatican washed its hands of any real culpability.

Suffer little children then, nothing to do with us, move along there.

What the Vatican didn’t do, as McGarry, a superb journalist. points out, is accept any responsibility for their own part in creating the worst scandal in Irish history involving the church.

The 1997 letter the Vatican sent covering this issue allowed bishops not to turn over evidence of abuser priests if they felt it transgressed canon law.

In other words canon law surpassed civil law even when crimes were committed.

Consider this also the man they sent to Ireland to sort out the mess when it was at its height was one Cardinal Cardinal Darío Castrillón Hoyos, (pictured), prefect of the Congregation for the Clergy, the Vatican body overseeing this issue.

Who was Cardinal Hoyos?

The Irish Times reports that “In 2001 Cardinal Hoyos wrote a letter to French bishop Pierre Pican praising him for not passing information about an abuser priest to police. Bishop Pican received a suspended sentence for failing to report the priest who was sentenced to 18 years for the repeated sexual assault of boys over 20 years, and the rape of one of them.

Cardinal Hoyos wrote to Bishop Pican: “I am pleased to have a colleague in the episcopate who, in the eyes of history and of all other bishops in the world, preferred prison to denouncing his son and priest.”

This was the man in charge of the Irish mess at the Vatican.

Talk about a fox in charge of the hen house.

The Vatican states that Hoyos told the Irish bishops in 1998 that the church “should not in any way put an obstacle in the legitimate path of civil justice” when it came to priest abusers.

They do not revel that he also called for Vatican policy on the issue to be followed.

That policy was that mandatory reporting of priest abusers “gives rise to serious reservations of both a moral and a canonical nature”.

The Vatican letter also warned that procedures in the Irish bishop’s document on child abuse appeared “contrary to canonical discipline”. It also referred to it as “merely a study document”.

One Irish bishop stated he felt the mandate from Rome was “a mandate to conceal the crimes of a priest”.

McGarry also reports that at that 1997 meeting then Dublin Archbishop Desmond Connell “thumped a table in frustration as Cardinal Hoyos insisted it was Vatican policy to defend the rights of an accused priest above all.”

Another leading clergyman considered that the Vatican orders “placed the [Irish] bishops in an invidious position”.

It meant any priest against whom they took action “had a right of appeal to Rome and was most likely to succeed.”

indeed this subsequently happened when new Dublin Archbishop Diarmuid Martin tried to replace two bishops he considered had turned a blind eye to abuse. They appealed to Rome and won their case.

The Vatican is trying to hoodwink public opinion and pretend they were sincere in their efforts to stamp out what they tried to portray as a uniquely Irish problem of child sex abuse.

It was not confined to Ireland as we know all to well here in America and the Vatican response to this day is disgraceful.

This letter to the Irish government just makes that all the clearer.