KANNUR: Two more nuns in the Kottiyoor rape case in which a priest has been named as an accused, surrendered before the police on Thursday.

The nuns have been accused of taking away the newly born baby of the 16-year-old girl who was raped by the priest. They reportedly sent the baby to an orphanage. They are also charged with destroying the evidences in the case.

The two nuns would be produced by the police before session court later on Thursday.

The latest development brings the total number of persons arrested in the case to 10.

Following the court order, all the seven accused except the priest Robin alias Mathew Vadakkancheril have been granted bail.

Kannur: Two more nuns, charged with covering up the rape of minor girl by a catholic priest in the district, surrendered before the police today.

The sixth and seventh co-accused – Sister Lizy Maria (33) and Sister Anitta(46) – surrendered before the investigating Circle Inspector N Sunil  Kumar around 0645 hrs. After recording their statements, they will be presented before Thalassery Additional Sessions court (Adhoc 1), later in the day.

On February 28, Fr Robin Vadakkumcherry, who was the vicar of the local church in Kottiyoor and the prime accused in the case was arrested on charges of sexually exploiting and impregnating 16-year-old girl, who gave birth to a child on February 7.

Police had also seized the passport, Canada Visa (valid till 2022), and mobile phone and laptop of the priest and sent him to judicial custody at sub jail here, till April 9. With these two nuns surrendering before the police, all the accused in the case have been arrested.

The Times of India

KANNUR: Three accused, including two nuns, in the Kottiyoor rape case in which a priest has been named as an accused, surrendered before the police on Friday.

The charge against them is that they helped to conceal the entire case in which a minor girl who was allegedly raped by priest, Robin Vadakkancheril alias Mathew Vadakkancheril, gave birth to a baby boy in Christu Raj Hospital in Koothuparamba on February 7.

The charge is that with the help of the hospital authorities, the newborn was shifted to Holy Infant Mary’s Foundling Home in Vythiri the same day but the CWC did not record it till February 20 and then signed the placement order without any verification. They surrendered as per the order of the Kerala High Court while considering their anticipatory bail plea.

Another accused in the case, Thankamma, who is associated with St Sebastian Church, Neendunoki, at Kottiyoor, where the girl was raped in May 2016, is yet to surrender.

After the arrest of Robin, the CWC chairman and member were removed from the post. They had all gone absconding following the development.

The other accused in the case – gynecologist Tessy Jose, administrator Ancy Mathew and pediatrician Hyderali -from Christu Raj Hospital, as also two other nuns – Liz Maria and Anitta – are still absconding, and their anticipatory bail plea is under the consideration of the Thalassery additional district sessions court.

The Times of India

Sr Betty Jose at the Peravoor police station on Friday.

KANNUR: Three days after the high court asked them to surrender, in connection with the Kottiyoor rape case, a priest and two nuns surrendered before Peravoor police inspector on Friday morning.

The trio is accused of covering up the case and along with the main accused, Father Robin Vadakkancheril, they have also been charged under the relevant sections of the Protection of Children from Sexual Offences (POCSO) Act.

After questioning, they were produced in the additional session’s court in Thalassery in the afternoon, which granted them bail, as per the instruction of the high court.

Police said that they got valuable information that would help in the investigation, after they interrogated the trio.Another accused in the case, identified as Thankamma, is likely to surrender before the police on Saturday.

Meanwhile, the court would consider on March 20, the anticipatory bail plea of five other accused in the case – gynaecologist Tessy Jose, administrator Ancy Mathew and paediatrician Hyderali from Christu Raj Hospital, where the girl delivered a baby boy after she was allegedly raped by the priest, as also two other nuns – Liz Maria and Anitta, who allegedly helped shifting the baby.

Father Thomas Joseph Therakam, Sister Betty and Sister Ophelia, the co-accused in the Kottiyoor rape case, surrendered before the police in Kannur on Friday.

Fr Therakam, the former child welfare committee chairman, and the two nuns arrived before the Peravoor circle inspector with their lawyer and turned themselves in.

Sister Betty is one of the child welfare committee members, while Sister Ophelia is the superintendent of an orphanage in Wayanad.

Fr Therakam and the nuns are the co-accused in a case, where a minor girl was raped and impregnated by Fr Robin Vadakkumcherry, a vicar, in Kottiyoor.

The co-accused, who were on the run, have been booked for hiding knowledge of the rape and aiding the delivery of the baby in February.

The victim gave birth to a boy at a private hospital in Kuthuparamba, and the child was taken to an orphanage at Vythiri in Wayanad.

Fr Therakam is also accused of trying to help Fr Vadakkumcherry to flee the country.

The Kerala High Court had ordered the priest and the nuns, who were absconding since Vadakkumcherry’s arrest, to surrender before the police.

The accused was trying to escape to Canada 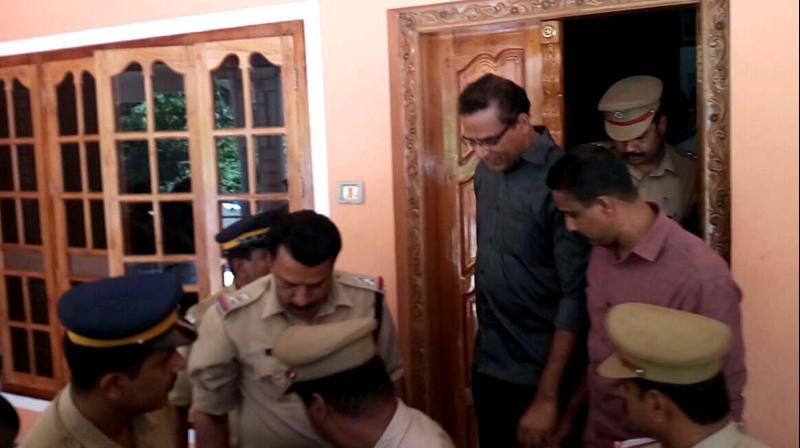 KANNUR: Fr Robin Vadakkumchery, former vicar of St Sebastian’s church, Neendunokki, near Kottiyoor, who was under custody over raping a minor girl, was arrested by police on Tuesday. He was already nabbed by a team led by Peravoor CI N Sunilkumar on Monday night, while he was trying to escape to Canada. The girl had given birth in the second week of this month and the hospital authorities also tried to hush up the matter. The accused admitted his crime during interrogation.

The newborn was shifted to a Christian orphanage in Vythiri, Wayanad, just a day after the delivery, said the CI, who is the investigating officer. The police shifted the newborn to a government home in Pattuvam on Monday. Fr Vadakkumchery was taken to the Parish house for collecting evidence, before taking him to Kuthuparamba judicial first class magistrate court. Since he is charged under POCSO Act, he will not receive bail until the trial is over.

The 16-year-old victim was a student of IJM Higher Secondary School, Kottiyoor, where Fr Vadakkumchery was the manager. She was raped at the Parish house, said the police. The school authorities as well the parents were not aware of the pregnancy, until the delivery, they said. “The girl attended classes until February 6, and the she gave birth on February 8, if the statements are true. The parents took her to hospital in order to treat ‘an infected appendix’. It was only on Sunday, an anonymous call, from inside the school informed the Childline about the involvement of the priest in the ‘pregnancy’. The girl’s statement was taken first by women cops, to whom she said her father was responsible. The father also admitted to raping his own daughter,” the CI said.

However, the police could identify the conflict between the statements of the father and the daughter and in a detailed questioning, the girl herself admitted that she was abused by Fr Vadakkumchery. Iritty DySP Prajeesh Thottathil said that the police were misled in the beginning, but the detailed questioning helped them to track the accused and trace him immediately. The police said that Christuraja hospital, Kuthuparamba, was also part of the crime, though the authorities insist that they were informed that the girl had crossed 18. The orphanage also played foul by concealing the information even from the police and Childline authorities.