Tens of thousands of Dutch children were sexually abused by priests and other Roman Catholic figures, but church officials failed to take adequate action or report problems to police, a panel finds.

Reporting from London — Tens of thousands of Dutch children were sexually abused by priests and other Roman Catholic religious figures in the last 65 years, but church officials failed to take adequate action or report problems to police, an independent commission said Friday.

Many of the victims spent part of their childhood in Catholic institutions such as schools and orphanages, where the risk of abuse was twice as high as in the general population, the commission said. But complaints were often ignored or covered up by authorities who were more intent on protecting the church’s reputation than providing care for abuse victims.

An independent commission set up by the Dutch Conference of Bishops and the Conference of Dutch Religious Orders, another Catholic organization, examined such misconduct from 1945 to 2010 and how the church chose to deal — or not to deal — with it.

Friday’s long-awaited report adds more fuel to the abuse scandal that has rocked the Catholic Church worldwide, from America to Australia. The Vatican’s credibility and standing has been significantly eroded by a stream of allegations that priests molested and assaulted members of their flock, and that bishops and other senior church officials tried to hush up the accusations.

The Dutch commission stopped short of accusing the Catholic Church in the Netherlands as a whole of fostering an institutional “culture of silence.” The report said that authority within the Dutch church was fragmented, with each diocese given latitude to deal with problems on its own. There was no centrally organized policy or procedure for dealing with sexual abuse.

Wim Eijk, the archbishop of Utrecht, apologized for what happened in years past and told journalists that the report “fills us with shame and sorrow.” The conference of religious orders called the abuse “a dark chapter in the history of religious life” and vowed not to repeat mistakes.

The investigation was launched in August 2010 after allegations of abuse at a Catholic institution in eastern Holland. Those allegations triggered others from around the country of sexual misconduct by Catholic authority figures.

The commission found that tens of thousands of children in the Netherlands were subjected over the years to abuse ranging from unwanted sexual advances to rape. Of these victims, 10,000 to 20,000 lived for some part of their youth in Catholic-run institutions such as reform schools and seminaries during the period from 1945 to ’81, after which Catholic homes for children were phased out.

When victims tried to complain, they encountered a hierarchy that often dismissed their allegations and even, in some cases, blamed the youngsters for provoking the abuse, the report said. Punishment for offenders, when it was actually meted out, consisted of quiet transfers, orders to do penance, or medical or psychological treatment.

Defrocking an offending priest was rare; so was expulsion, if only because officials wanted to avoid a decrease in the number of members of a religious order, the commission said.

Reporting abusers and their alleged crimes to police was anathema to church officials eager to prevent any whiff of scandal.

“That was left to victims and their parents, who were certainly not encouraged to do so,” the commission said in a statement accompanying the release of its report. “The commission is critical of the hesitation, and sometimes the unwillingness, of bishops and superiors to notify the public prosecution service.” 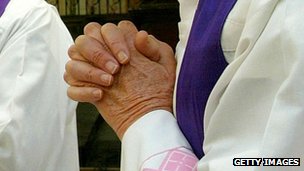 Tens of thousands of children have suffered sexual abuse in Dutch Catholic institutions since 1945, a report says.

The report by an independent commission said Catholic officials had failed to tackle the widespread abuse at schools, seminaries and orphanages.

But the report also found that one in five children who attended an institution suffered abuse – regardless of whether it was Catholic.

“This episode fills us with shame and sorrow,” said a bishops’ statement.

The commission, which began work in August 2010, sought to uncover what had gone on and how it had happened, and examined what kind of justice should be offered to victims.

It was triggered by allegations of abuse at a Catholic school in the east Netherlands, which prompted other alleged victims to come forward.

It studied 1,800 complaints of abuse at Catholic institutions, identifying 800 alleged perpetrators, just over 100 of whom are still alive.

It also conducted a broader survey of more than 34,000 people, to gain a more comprehensive picture of the scale and nature of abuse suffered by Dutch minors.

The report estimates that 10,000-20,000 minors were abused in the care of Catholic institutions between 1945 and 1981, when the number of Church-run homes dropped. In the years between 1981 and 2011, several more thousands suffered at the hands of priests and others working for the Church.

Most of the cases involved mild to moderate abuse, such as touching, but the report estimated there were “several thousand” instances of rape.

“The problem of sexual abuse was known in the orders and dioceses of the Dutch Catholic Church,” the commission says, according to news agency AFP, “but the appropriate actions were not undertaken.”

A taboo on discussing sexuality in society until the 1960s and the Catholic Church’s “closed” administrative structure were some of the reasons for the official failure to respond effectively to the problem, the commission said.

“Then again, people simply could not believe that a religious person could do that,” commission chief Wim Deetman told a news conference.

The report also estimates that one in 10 Dutch children have suffered some form of abuse, rising to one in five among those who had attended an institution – regardless of whether it was Catholic.

“Sexual abuse of minors is widespread in Dutch society,” the commission reportedly said.

Bert Smeets, an abuse victim who attended the presentation of the report, said it did not go far enough in detailing precisely exactly what happened.

“What was happening was sexual abuse, violence, spiritual terror, and that should have been investigated,” Mr Smeets told the Associated Press news agency. “It remains vague. All sorts of things happened but nobody knows exactly what or by whom. This way, they avoid responsibility.”

According to AP, prosecutors say the inquiry referred 11 cases to them – without naming the alleged perpetrators. They opened only one investigation based on those reports, saying the other 10 did not contain enough detailed information and appeared to have happened too long ago to prosecute.

Mr Deetman, a former government minister, headed the commission, which also includes a former judge, university professors and a psychologist.

Its findings have been keenly awaited by the Dutch population, 29% of whom are identified as Catholic, the BBC’s Anna Holligan reports from The Hague.