French investigators questioned a prominent cardinal Wednesday about alleged failures to report on suspected pedophilia by a priest under his watch, in the highest-profile church abuse investigation in France to date.

Cardinal Philippe Barbarin has been under pressure for months since he was named in two investigations of accusations of sexual abuse of children by priests.

Barbarin, one of the highest-ranking figures in the French Catholic Church, is among several church officials accused of failing to report pedophile priests to judicial authorities. He has denied covering up abuse, but acknowledged some mistakes in handling and appointing priests.

Barbarin is being questioned in the case of Bernard Preynat, a priest charged with sexual aggression and rape of a minor and accused of abusing boy scouts in the 1980s. Barbarin says he was convinced the priest reformed in 2007-2008 when they met.

A Lyon court is scheduled to decide Thursday whether the case can still be pursued or whether the alleged abuse happened too long ago to determine responsibility.

Some called for Barbarin’s resignation after the investigations began, and France’s prime minister called on Barbarin to take action.

“Based on the information I have, I think in Lyon, Cardinal Barbarin has taken the necessary measures and has taken things well in hand,” the pope said in an interview with French Catholic daily La Croix last month.

Cardinal Barbarin urged by Pontiff to remain despite calls for resignation

Pope Francis met on May 20 with Cardinal Philippe Barbarin of Lyon, France, and encouraged him to continue in office, dismissing public calls for his resignation because of his alleged failure to act on sex-abuse complaints.

Cardinal Barbarin– who has consistently defending his record, saying that he took action as soon as he was aware of abuse complaints– told Le Figaro that the Pope “advised me to wait quietly” while an investigation is conducted. When asked whether he would consider resignation, the French prelate replied:

For now, that would not be responsible; it would be contrary to my duty. One does not desert ship in the middle of a storm!

Last week, when he was questioned about Cardinal Barbarin’s status, Pope Francis gave a similar answer, saying that it would be “an imprudence” for the cardinal to step down. 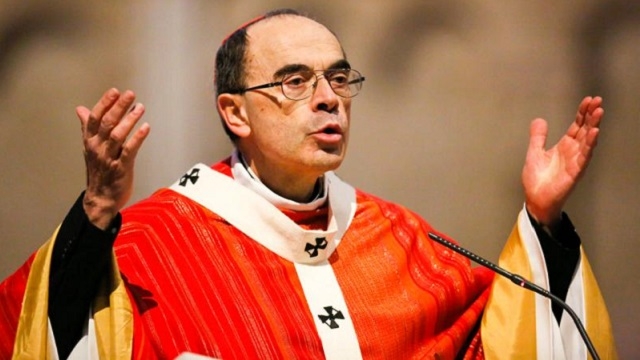 Barbarin is facing a storm over his handling of allegations against Father Bernard Preynat, accused of sex attacks(Reuters – File Photo)

Father Bernard Preynat was placed under formal investigation in January for sex attacks on four boy scouts between 1986 and 1991.

Pope Francis has ruled out seeking the fast-track resignation of a French cardinal accused of failing to inform the authorities about an alleged paedophile priest, the French newspaper La Croix reported on Tuesday.

In an interview with the Catholic daily on Monday, the pope said it would be “contradictory, imprudent” to seek Cardinal Philippe Barbarin’s resignation at this stage. “We will see after the end of (any) trial. But (to seek his resignation) now would be to imply guilt,” the pontiff said.

Francis said he believed Barbarin had “taken the necessary measures, he took things in hand. He is brave, creative, a missionary. We should now wait for the outcome of the civilian judicial procedure.”

Barbarin, the archbishop of Lyon, France’s second largest city, is facing a storm over his handling of allegations against Father Bernard Preynat, accused of sex attacks on four boy scouts between 1986 and 1991. Preynat was placed under formal investigation in January, but his lawyer argues the alleged crimes are now beyond the statute of limitations.

In March, prosecutors in Lyon ordered a preliminary investigation into three accusations by civilian plaintiffs that Barbarin’s diocese knew about the scandal a number of years ago but failed to inform the authorities. According to the diocese, Barbarin first received testimony from an alleged victim in mid-2014, and relieved Preynat of priestly office in May 2015.

An association called La Parole Liberee (“The Liberated Word”) says it has identified between 50 and 60 victims.

One of the group’s founders, Francois Devaux, said that the pope did not have enough information to be able to exclude Barbarin’s resignation. “He is lacking many of the elements needed to have a clear idea of the situation. I think the pope does not have all the ins and outs (of the situation) to consider that Cardinal Barbarin should remain in place,” Devaux said.

The Lyon diocese has not made an official comment on the report. A source close to the cardinal however said the pope was commenting for the first time on the matter and that it was “an expression of confidence between two men who know and respect each other.”

LYON, France: French investigators searched the offices of the diocese of Lyon Wednesday over the alleged cover-up of a pedophile priest, a source close to the probe said.

The diocese said in a statement that the Archbishop of Lyon, Philippe Barbarin, who is under fire over his handling of the affair, “has said repeatedly that he is prepared to cooperate openly with the investigation”.

The search of the offices is linked to the prosecution of Bernard Preynat, a priest who has admitted sexually abusing scouts that he was supervising in the Lyon area of central France more than 25 years ago.

Preynat’s victims have filed a formal complaint against Barbarin and other leading clergy, accusing them of failing to inform the police of the priest’s acts when he became aware of them in 2008.

“As part of the preliminary investigation opened by the Lyon prosecutor, the diocese of Lyon has today handed over to investigators material which could shed light on these tragic events,” the diocese said in a statement.

Barbarin, 65, a media-friendly and influential archbishop, has denied any cover-up and pointed out that the crimes date from a decade before he became archbishop of Lyon in 2002.

Last week, he apologized during a mass to victims of sexual abuse.

Quoting Pope Francis, Barbarin said he was “obliged to assume all the evil committed by some priests and personally apologize for the damage they have caused by sexually abusing children.”

The scandal is the worst to hit the Catholic Church in France since 2001, when a bishop was given a three-month suspended jail sentence for failing to inform authorities of a pedophile priest.

The Catholic Church worldwide continues to be dogged by cases of pedophile priests and past cover-ups, despite Pope Francis’ promise of a crackdown.

A French judge has ordered an investigation into “failure to report a crime” after alleged victims of a pedophile priest said Catholic officials covered up for him. The allegations date back to the early 1990s.

The alleged victims of a pedophile priest have claimed that senior figures in the diocese of Lyon, in eastern France – including the city’s Archbishop, Cardinal Philippe Barbarin (photo) – failed to report to police the priest who has been charged with sexually abusing minors between 1986 and 1991.

A French judge has opened a preliminary investigation into “failure to report a crime,” and “endangering the lives of others,” judicial sources said Friday.

A formal investigation was opened last month after the 70-year-old priest, Bernard Preynat, admitted he sexually abused young Scouts more than 25 years ago.

Preynat’s lawyer, Federic Doyez, said the priest told the judge that “the facts had been known by the church authorities since 1991,” when he was expelled from the independent Scouts group he had led for nearly 20 years.

In a statement, the 65-year-old Cardinal Barbarin said that “he was not the archbishop of Lyon at the time” and that he had “never covered up pedophilia.” He became Archbishop of Lyon in 2002 and was made Cardinal a year later.

A source close to the Cardinal told the AFP news agency “This comment does not in any way target Cardinal Barbarin who quite rightly suspended Father Preynat after meeting a first victim and taking advice from Rome, and this, even before a first official complaint was made.”

Barbarin said earlier this year that he had been made aware of the priest’s behavior “around 2007-8 and had received the backing of the Vatican which said it had confidence he would deal with the matter “with great responsibility.”

‘Spotlight’ and the Vatican

Vatican spokesman Federico Lombardi said “sensationalism” surrounding the Oscar-winning film “Spotlight” and hearings into the alleged cover-up of abuse by Cardinal Pell had given the public the wrong impression.

The media reaction to both events “meant that most people, particularly those less well informed or with a short memory, think the Church has done nothing or very little to answer to these horrible tragedies,” Lombardi said.

The film “Spotlight” portrays The Boston Globe newspaper’s investigation into sexual abuse in the Catholic Church and institutional efforts to cover up the crimes. It won the Oscar for best picture last Sunday.