In this March 12, 2015 photo, Juan Carlos Cruz poses for a portrait in Wilmington, Delaware. Cruz says he can’t accept the Pope’s apology until those who protected his abuser are brought to justice. (Matt Rourke/Associated Press)

Pope Francis apologized Tuesday to Chilean victims of sexual abuse by priests for the “irreparable damage” they suffered — but survivor Juan Carlos Cruz says his words are just “empty headlines.”

“They never come with concrete actions, which is what we would expect,” Cruz told As It Happens host Carol Off.

“I’m not a vengeful person. I tend to forgive everybody. But the pain is so big that he continues to allow to be inflicted on survivors.”

Cruz is not alone. Francis dove head-first into Chile’s sex abuse scandal on his first full day in Santiago that came amid unprecedented opposition to his visit. 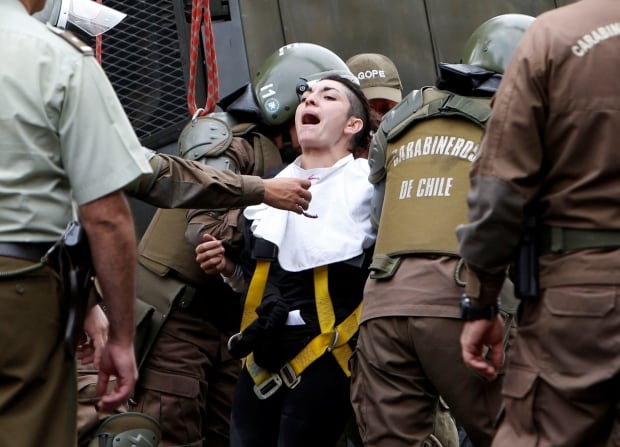 Police detain a protester dressed as a priest as Pope Francis arrives in Santiago, Chile, on Monday. (Carlos Vera/Reuters)

Massive protests have erupted on the streets of Santiago, and three churches were torched overnight, including one that was burned to the ground.

At the heart of the protest is Cruz’s abuser, the disgraced Rev. Fernando Karadima, and those accused of helping him cover his tracks.

Cruz and other victims first went public with their accusations against Karadima in 2010 after complaining for years to church authorities the powerful and well-connected priest had kissed and fondled them when they were teenagers.

Chilean prosecutors investigated Karadima, but dropped the charges because the statute of limitations had expired. The judge handling the case stressed that it didn’t collapse for lack of proof.

In 2011, the Vatican found him guilty of sexually molesting minors, barred him from all pastoral duties and sentenced him to a lifetime of “penance and prayer.”

“We call it a golden retreat,” Cruz said. “They remove them. They put them in some home with all the comforts that you would expect and someone serving them. But they can’t do public ministry.”

Many Chileans are also furious over Francis’ decision in 2015 to appoint a Karadima protégé as bishop of the southern city of Osorno.

Bishop Juan Barros has denied knowing about Karadima’s abuse — but many Chileans don’t believe him, and his appointment has badly split the diocese.

Cruz alleges Barros not only knew about the abuse he and his peers suffered at the hands of Karadima, but that he was actually in the room when it happened. 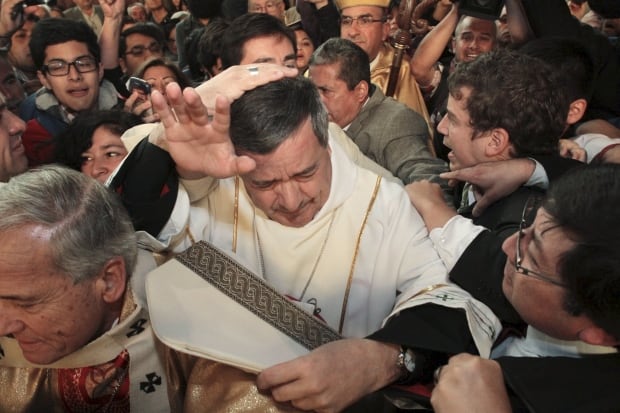 Bishop Juan Barros is pictured here flanked by protesters at the Osorno cathedral on March 21, 2015. He is accused of covering up for one of the nation’s most notorious child molesters. (Carlos Gutierrez/Reuters)

“He was right there watching while we were all being abused,” Cruz said. “I mean, what are you supposed to think when all these people that should be punished are rewarded?”

Francis has defended Barros, saying the Osorno opposition to him was “stupid,” unfounded and coming from the left.

Barros attended a Mass celebrated by Francis on Tuesday in Santiago. Upon exciting, Barros told local media: “Many lies have been made about me.”

He again said he did not witness any abuse by Karadima.

Cruz — along with fellow survivors James Hamilton and Jose Andres Murillo — continue to fight for Barros and his underlings to be brought to justice.

The trio have launched a civil lawsuit against the church, seeking an apology and damages of $600,000 US ($744,000 Cdn). Their next hearing is set for March.

“We can only imagine how many people were abused,” Cruz said, noting that many have remained silent or taken their own lives.

“We do it for them,” he said, “because we want them to have a voice as well.”

— With files from Associated Press

Pope Francis has met with victims of sexual abuse by priests in Chile and apologized for the “irreparable damage” they suffered. He said the Church was committed to “ensuring that such things don’t happen again.”

On Tuesday, the first day of a week-long Latin-America trip, Pope Francis asked “for forgiveness” for the “irreparable damage” done to children who were raped and molested by Catholic priests in Chile.

The pontiff met with a small group of abuse survivors at a “strictly private” gathering at the Vatican’s Apostolic Nunciature embassy in the capital, Santiago, the Vatican said.

Francis listened to their stories, “prayed with them and wept with them,” spokesman Greg Burke told reporters.

Earlier in the day, the pontiff made his first public remarks about abuse in a speech at La Moneda presidential palace.

Addressing Chilean President Michelle Bachelet, lawmakers, judges and other authorities, the pope said he felt “bound to express my pain and shame” that some of Chile’s clergy had sexually abused children who were in their care.

“I am one with my brother bishops, for it is right to ask forgiveness and make every effort to support the victims, even as we commit ourselves to ensuring that such things do not happen again,” he said.

His comments came as the number of Catholic churches that have been attacked in Chile in the past week rose to eight. Scuffles broke out between riot police and protesters who had gathered outside the Santiago park where Francis celebrated Mass with some 400,000 people on Tuesday morning.

Pope Francis made no direct mention of Fernando Karadima, the country’s most notorious priest, who was sanctioned by the Vatican in 2011 to a lifetime of “penance and prayer” for sexually molesting minors.

He also did not mention the fact that the emeritus archbishop of Santiago knew of complaints against Karadima — a charismatic and well-connected priest — but did not remove him from ministry.

Accusations from victims emerged in 2010 after people had been complaining for years to church authorities that Karadima had kissed and fondled them when they were teenagers.

The scandal rocked the Catholic Church and greatly hurt its credibility, and many Chileans are still angry over Francis’ decision, in 2015, to appoint a protege of Karadima as bishop of the southern city of Osorno.

Bishop Juan Barros has denied knowing about Karadima’s abuse, but many Chileans don’t believe him, and his appointment has badly split the diocese.

“The Karadima case created a ferocious wound,” Chile’s ambassador to the Holy See, Mariano Fernandez Amunategui, told the Associated Press. The case, he added, has plunged the Chilean church into “crisis.”

Pope Francis is due to meet with members of Chile’s persecuted Mapuche community in the southern city of Temuco on Wednesday.

Pope meets victims of child sexual abuse in Chile, ‘cries with them’

SANTIAGO (Reuters) – Pope Francis publicly expressed “pain and shame” on Tuesday over the rape and molestation of children by priests in Chile and later listened, prayed and cried at a private meeting with victims.

“No one else was present. Only the pope and the victims,” the spokesman said. “This was so they could speak of their suffering to Pope Francis, who listened to them and prayed and cried with them.”

It was only the second time on his overseas trips that the pope has met victims of sexual abuse, although he has met some at the Vatican. The last meeting on a trip was in Philadelphia in 2015.

Burke declined to give details, but his statement came at the end of an intense day for the pope, during which he spoke of sexual abuse twice, once asking forgiveness for abuses he said had done “irreparable damage” to victims.

The Argentine pontiff made his first remarks at the presidential palace, La Moneda, an unusual choice because the pope usually talks about sexual abuse to Church leaders and not politicians.

But the scandal has gripped the nation, prompting many politicians to criticizes the Church in the staunchly Catholic country, where the crisis has scarred its credibility.

“Here I feel bound to express my pain and shame at the irreparable damage caused to children by some ministers of the Church,” he said, drawing sustained applause, including from President Michelle Bachelet and diplomats.

“I am one with my brother bishops, for it is right to ask for forgiveness and make every effort to support the victims, even as we commit ourselves to ensuring that such things do not happen again,” he said.The crisis centered on the pope’s appointment in 2015 of Bishop Juan Barros to head the small diocese of Osorno in south-central Chile.

Barros, who attended a papal Mass on Tuesday, has been accused of protecting his former mentor, Father Fernando Karadima, who was found guilty in a Vatican investigation in 2011 of abusing teenage boys over many years. Karadima has denied the allegations, and Barros said he was unaware of any wrongdoing.

“There have been many lies told about my situation,” he told Reuters after the Mass.

It was not clear if the victims the pope met were molested by Karadima. Burke would only say that they were all victims of abuse by priests.

Along with growing secularization, the scandal has hurt the standing of a Church that defended human rights during the 1973-1990 dictatorship of Augusto Pinochet.

A poll by Santiago-based thinktank Latinobarometro this month showed that the number of Chileans calling themselves Catholics fell to 45 percent last year, from 74 percent in 1995.

Francis returned to the theme of abuse on Tuesday evening in an address to priests and nuns in Santiago’s cathedral. He spoke of “this great and painful evil” which had led victims and their families to “see the trust they had placed in the Church’s ministers betrayed.”

But he said he also understood the pain of priests and nuns who had nothing to do with abuse and had been unfairly tainted, including being “insulted in the metro or walking on the street.”

At least eight Catholic churches were attacked in Chile in the past week.

Police in riot gear dispersed some 200 demonstrators trying to make their way to a park in Chilean capital Santiago, where the pope – the first Latin American head of the Church – said Mass for some 400,000 people.

Hours after the pope arrived in Chile on Monday, two small wooden churches were burned to the ground near Temuco, where Francis is due to visit on Wednesday.

The indigenous Mapuche in the area accuse the state and private companies of taking their ancestral lands. The Mapuche say the pope’s ceremony will be held on seized land.

A church in the capital was attacked during the night, causing minor damage. Vandals burned Chilean and Vatican flags at the site and tossed pamphlets with threats against the pope.

At one attack which involved a homemade bomb, a pamphlet was left that read: “Pope Francis, the next bomb will be in your robe.”

Graffiti scrawled on one Santiago church read: “Burn the pope.”

About 10 blocks from Tuesday’s Mass, riot police clashed with people protesting against the sexual abuse scandal and the $17 million cost of the papal visit. “Complicit Pedophiles,” read one of the banners.

But the welcome most Chileans have given Francis has been warm, with tens of thousands lining the streets.