Some 600 people gathered Saturday in front of the cathedral in the southern Chilean town of Osorno to protest against Fr. Juan Barros as he assumed the position of bishop of the diocese, because he is perceived to have covered up another priest’s sexual abuse of minors.

Many of the protesters, dressed in black and carrying hundreds of black balloons, waited for the arrival of Fr. Barros, who had to enter through a back door to avoid the booing.

San Mateo Cathedral in Osorno, a city located 942 kilometers (585 miles) south of Santiago, was cordoned off at sunrise by police, who failed, however, to prevent scores of demonstrators from entering the cathedral grounds throwing things and shouting “Pedophile priest!”

The naming of Juan Barros by Pope Francis was met from the beginning with rejection both at a political level and by the Catholic community itself, which in Chile constitutes some 68 percent of the population.

The Congregation of the Sacred Hearts also issued a communique expressing its dismay at the appointment, which, in its opinion, “did not take sufficiently into account his involvement in the accusations of abuse against Fr. Fernando Karadima.”

Juan Barros is one of the four members of the bishopric who were trained by Karadima, a priest who was found guilty in 2011 by the Vatican of committing sexual abuse of minors and who was ordered to spend the rest of his life in prayer and penitence and to never again exercise any act of the priesthood in public. EFE

A supporter of Rev. Juan Barros, right, tries to restrain protestors as Barros, not seen, enters the cathedral for his ordination ceremony as bishop in Osorno, Chile, Saturday, March 21, 2015. Barros was ordained amid protests of people that accuse him of covering up sexual abuse committed by his mentor Rev. Fernando Karadima in the 1980s and ’90s.(AP Photo/Mario Mendoza Cabrera) – CHILE OUT – NO USAR EN CHILE MARIO MENDOZA CABRERA — AP

SANTIAGO, Chile — A bishop was ordained in southern Chile on Saturday amid shouts and scuffles between supporters and protesters who accuse him of covering up crimes of a mentor the Vatican has sanctioned for abusing young boys.

Riot police protected the 58-year-old Rev. Juan Barros as he left the ceremony at the cathedral of San Mateo in the city of Osorno.

Thousands of churchgoers dressed in the black of mourning protested outside the church and a few made their way inside, despite police efforts to keep them out. Even inside the cathedral, supporters of Barros scuffled with opponents who shouted denunciations.

Only 15 of the country’s 35 bishops and many priests from the diocese also shunned the ordination of their new bishop — a service without communion that was cut short after half an hour.

While Barros himself is not accused of molestation, at least three victims of sex abuse say he was present when they were molested by the Rev. Fernando Karadima in the 1980s and 90s.

The controversy has been closely watched by victims, advocacy groups and lawmakers as a test of Pope Francis’ promises to crack down on clerical sex abuse.

“I hold the Pope responsible,” said Juan Carlos Cruz, a 51-year-old journalist who is one of the accusers.

“As victims, we had become used to the slaps in the face by the Chilean hierarchy, but we never expected a slap in the face from the Pope,” he told The Associated Press.

Barros had long declined to comment publicly on allegations against him. However he sent a letter to priests in the diocese on Monday saying he did not know about Karadima’s abuses when they happened.

“I never had knowledge of, or could have imagined, the serious abuses that this priest committed against the victims,” said the letter.

More than 1,300 church members in Osorno, along with some 30 priests from the diocese and 51 of Chile’s 120 congress members sent letters to Francis last month urging him to rescind the appointment.

But the Pope confirmed his decision to appoint Barros after he recently met with him.

A Vatican investigation found Karadima, one of Chile’s most prominent priests, guilty of sex abuse in 2011 and sentenced the now 84-year-old priest to a cloistered life of “penitence and prayer.”

Criminal charges against him were thrown out because the statute of limitations had expired.Cruz said that he and another teen boy would lie down on Karadima’s bed, one resting his head at the man’s shoulder, another sitting near his feet. The priest would kiss the boys and grope them, he said, while Barros watched.

SANTIAGO, Chile — Hundreds of demonstrators dressed in black barged into a cathedral in a city in southern Chile on Saturday and interrupted the installation ceremony for the city’s new Roman Catholic bishop, Juan Barros, whom they accuse of complicity in a notorious case of clerical sexual abuse, blocking his passage and shouting, “Barros, get out of the city!”

The scene inside the Cathedral San Mateo de Osorno was chaotic, with television images showing clashes between Barros opponents, carrying black balloons, and Barros supporters, carrying white ones. Radio reports said several protesters tried to climb onto the altar where Bishop Barros was standing. After the ceremony, he left the cathedral through a side door escorted by police special forces. Outside, about 3,000 people, including local politicians and members of Congress, held signs and chanted demands that he resign.

Weeks of protests, candlelight vigils and letters to Pope Francis were not enough to persuade him to rescind his decision in January to appoint Bishop Barros to lead the Diocese of Osorno, 570 miles south of the capital, Santiago. Bishop Barros was a close associate of the Rev. Fernando Karadima, a prominent Santiago priest whom the Vatican found guilty of sexual abuse in 2011. Father Karadima, now 84, was ordered to retire to a “life of prayer and penitence.”

The appeal was also a test case for the pope’s stated policy of zero tolerance for clerical abuses.

“We are used to the blows by the Chilean Catholic hierarchy, but it’s especially hurtful when the slap in the face comes from Pope Francis himself,” Juan Carlos Cruz, 51, who said he was abused by Father Karadima in the ‘80s, said in a telephone interview. “We hoped he was different.”

On Saturday, the Vatican declined to comment on Francis’ appointment of Bishop Barros.

Mr. Cruz and three other young men who were devoted followers of Father Karadima, and members of a Catholic youth movement he oversaw, accused him of sexually abusing them over two decades, starting when they were teenagers. Criminal charges were filed against the priest alleging abuse during the years 1980 to 1995, but a Chilean judge dismissed them in 2011, saying the statute of limitations had expired.

In a February letter to Archbishop Ivo Scapolo, the papal nuncio to Chile, Mr. Cruz accused Bishop Barros of covering up Father Karadima’s abuses, threatening seminarians if they spoke out about them and, while serving as secretary to Cardinal Juan Francisco Fresno, destroying letters addressed to him reporting the abuses.

“When we were in Karadima’s bedroom, Juan Barros saw how he touched us and made us kiss him,” said Mr. Cruz, referring to himself and other young victims. “He witnessed all of that countless times. And he has covered it all up.”

In a statement addressed to the Osorno community, Bishop Barros denied any knowledge of the abuses. “I never imagined the serious abuses committed by this priest,” he said. “I have never approved or participated in these gravely dishonest acts.”

In February, more than 30 priests and deacons of the Osorno Diocese signed a letter to Archbishop Scapolo asking the pope to reverse his decision. “We don’t feel embraced, and much less understood, by our church hierarchy,” they said. “The spiritual union of our church has been damaged.” Days earlier, 51 members of the Chilean Congress sent a letter to the Vatican asking the pope to revoke the appointment.

On Wednesday, the Chilean Bishops Conference issued a brief statement backing Pope Francis in “a spirit of faith and obedience” and calling for the unity of the church, without addressing the accusations against the bishop.

The archbishop of Concepción, Fernando Chomalí, met with the pope in Rome on March 6. “I spoke to him at length about the consequences the appointment has had in Osorno and the country,” Archbishop Chomalí said in a text message. “He was very well-informed of the letters he had received through different channels. The pope told me he had analyzed the situation in detail and found no reason” to reverse his decision.

Juan Carlos Claret, 21, a law student and church member who has been leading the protests in Osorno, said at least six candlelight vigils had been held in front of the cathedral in recent weeks. “A bishop has to have moral authority and Barros doesn’t have it, not for priests, lay people or civil society,” he said. “What does it take for Barros to resign, if he has the entire community against him?.”

Protesters in southern Chile have tried to stop the ordination of a Catholic bishop, accusing him of covering up a priest’s sexual abuse of young boys.

Police in the city of Osorno said at least 650 people turned up at the cathedral wearing black in protest against the ordination of Juan Barros.

The protesters say Bishop Barros used his position in the Church to try to deter an investigation into the actions of his mentor, Fernando Karadima.

Last Monday he sent a letter to priests saying: “I never had knowledge of, or could have imagined, the serious abuses that this priest committed against the victims.”

Before boarding a plane in Santiago, Bishop Barros, 58, said he had “confidence in the future”.

More than 1,000 people wrote to Pope Francis to ask him to review the appointment.

“I believe the Catholic Church is not listening to its people,” said Christian Democrat congressman Sergio Ojeda.

“That is why we are asking for Bishop Barros to show dignity and resign, putting an end to this tremendous problem,” he told La Tercera newspaper. 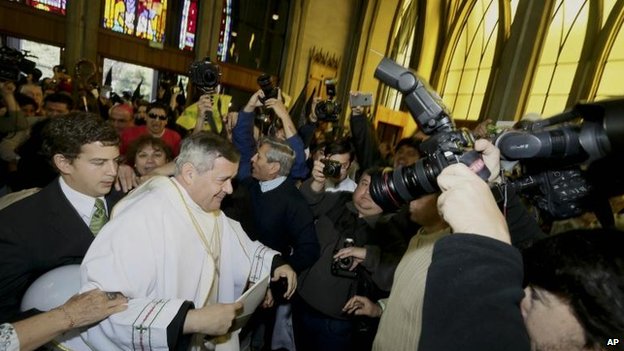 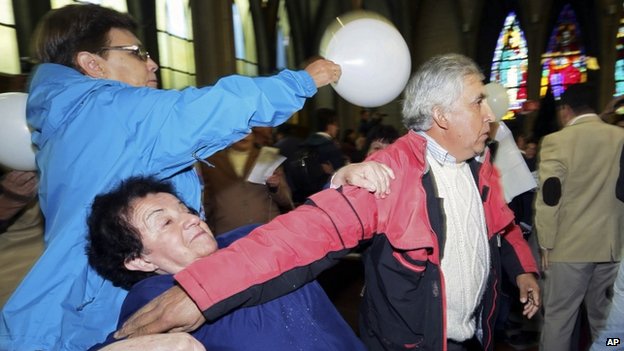 Supporters of the new bishop, wearing white and holding white balloons, tried to stop the protest 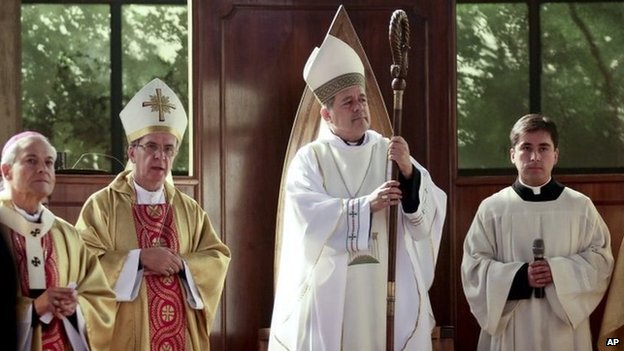 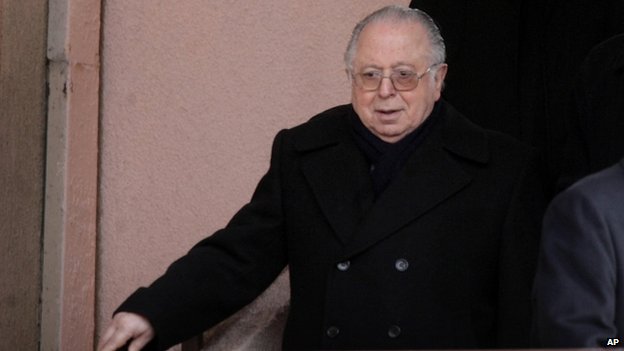 Before the scandal, Fernando Karadima was one of Chile’s most influential and respected priests

The top leaders of Chile’s Catholic Church and most of the local authorities stayed away, but the ceremony went ahead in the morning in Osorno, some 900km (560 miles) south of the capital, Santiago.

Protesters outside and inside the cathedral attempted to stop the ordination going ahead.

There was a heavy police presence there and three people were arrested.

Supporters of Bishop Barros also attended the ordination and said he was a good man, misunderstood by many.

Juan Barros was a protege of Father Karadima, who spent decades training young men to enter the priesthood, and regularly celebrated Mass at a well-known church in Santiago.

In February 2011, the Vatican found Father Karadima, then 81, guilty of sexually abusing children.

The Vatican ordered him to a life of “penitence and prayer” in a monastery in Santiago.

Months later, a judge dismissed a criminal case against him, saying the alleged crimes had been committed too many years before.

The BBC’s Gideon Long, in Santiago, says that before the allegations surfaced, Father Karadima was one of the most respected and influential priests in Chile.