Chilean Cardinal Francisco Javier Errazuriz Ossa, retired archbishop of Santiago, is pictured during the Mass for the election of the Roman pontiff in St. Peter’s Basilica at the Vatican in this March 12, 2013, file photo. Chilean James Hamilton, a survivor of sexual abuse by Father Fernando Karadima, said at a May 2 Rome press conference that Errazuriz covered up “the vile acts of Karadima.” (Credit: CNS photo/Paul Haring.)

ROME – Even though he’s considered to be at the center of the current sexual abuse crisis in the Chilean Church, Cardinal Francisco Javier Errázuriz, who sits on the “C9” council of cardinals that advises Pope Francis, won’t be coming to Rome next week when the rest of the country’s bishops meet with the pontiff.

Citing “personal reasons,” Errázuriz, 86, will not travel, even though Francis asked that every bishop in the country come to the Vatican to address the crisis created by well-documented cases of clerical sexual abuse and accusations of its cover-up.

Errázuriz was last in Rome in April, to participate in a April 23-25 C9 meeting. Per his own statement, he’s already given Pope Francis a 14-page report of the ramifications of the case of Father Fernando Karadima, Chile’s most notorious clerical abuser.

Three survivors of Karadima, have accused Errázuriz of covering up for the priest. They met the pope at the end of April, and told the press that they “would love to see” the cardinal, together with the current archbishop of Santiago, Cardinal Ricardo Ezzati, stand trial.

Karadima was found guilty by a Vatican court in 2011.

Errázuriz’s decision was first reported by Chile’s Tele 13 Radio, and then confirmed by several other local news outlets.

Chilean paper La Tercera, reports that people close to the cardinal also alleged that the trip to Rome was too expensive – the Vatican is not covering the cost. The Casa Santa Marta – the Vatican guesthouse which serves as the papal residence – was also booked, meaning it would be harder to avoid the press during the visit.

“It’s striking that Cardinal Errázuriz, with the relevance he has, has removed himself from such an important moment for our Church, one that the pope himself convoked and will preside over,” said Soledad Errázuriz, executive director of Catholic Voices Chile.

Francis asked the Chilean bishops to be available May 14-17, though it’s unclear at this point when the meetings will take place and what format they’ll follow. Most bishops are scheduled to arrive on Thursday and Friday, but some are already in Rome.

Francis summoned all of the Chilean bishops to Rome after he received a 2,300-page report from Maltese Archbishop Charles Scicluna and Father Jordi Bertomeu Farnós, who work for the Vatican’s Congregation for the Doctrine of the faith. The two interviewed 64 people in Chile and the United States.

In a letter he sent to Chile a week after he received the last documents of the report, Francis told the bishops that he had “made serious errors of judgement and perception of the situation, especially due to lack of truthful and balanced information.”

He also said that he planned to “call you to Rome to discuss the conclusions of the aforementioned visit and my conclusions.”

Next week’s will be the largest gathering of bishops to discuss clerical sex abuse in response to a papal summons.

Francis had originally sent Scicluna and Bertomeu to investigate the allegations made against Bishop Juan Barros, who was one of four bishops who belonged to Karadima’s inner circle. The pope had transferred Barros from the military diocese to the southern diocese of Osorno, generating uproar from both the local church and the victims of the abusive priest.

Juan Carlos Claret, spokesman of the lay association of Osorno that has protested Barro’s appointment since 2015, said that it’s “regrettable that the cardinal won’t attend, since this is an important moment to face up to responsibilities. We hope that the pontiff will make his decisions not in with a view of pastoral prudence, nor because of the presence or absence of certain people, but in relation to the needs of the Church.”

Once they were in Chile the papal investigators also spoke with survivors of other cases of clerical sexual abuse in the Latin American country, including those abused by Marist brothers. Ahead of the papal visit to Chile last January, the religious congregation acknowledged it had covered up cases of abuse.

As of January 2018, there were a total of 80 priests who have been credibly accused of sexual misconduct in the past 15 years in Chile – including local clergy and missionaries from abroad. According to La Tercera, one of Chile’s major news outlets, 45 were condemned either by civil or ecclesiastical courts, out of which 34 were for abusing minors.

At this point, it’s unclear what, if anything, will come from the journey of the Chilean bishops to Rome. The victims of Karadima and others, even within the hierarchy, have called for the resignation of not only the four bishops who worked closely with the priest, but also of the five bishops, including Ezzati, who are over the age of 75.

Speaking with La Tercera, Bishop Luis Infanti of Aysén said that he foresees a “strong tremor in the Chilean Church,” including “the departure of bishops.”

“In addition, tremor means to give a new direction to the Church in Chile,” he said. “The pope seeks to give a signal of change, otherwise, he wouldn’t call us to Rome. It is not to praise us, nor to rub our backs.”

Immediately after the pope’s letter was read in a live-streamed press conference, Barros said he was planning on attending the Rome gathering. Two weeks ago the diocese of Osorno released a statement saying he was having “health complications.” However, latest reports indicate Barros is already in Europe. 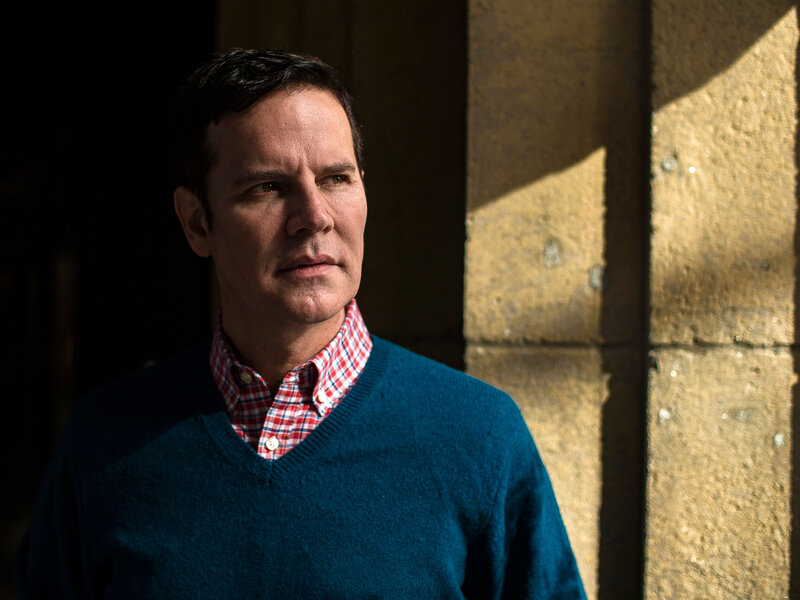 Juan Carlos Cruz, a survivor of sexual abuse by a Chilean predator priest, met with Pope Francis recently at the Vatican.

In January, Pope Francis traveled to South America to spread peace and hope. Many cheered him on, but he also wound up causing emotional pain when he dismissed accusations that Chilean clergy had covered up sexual abuse.

In the weeks that followed, the Vatican’s leading sex crimes investigator looked into the allegations, and the pope did an about-face: He acknowledged making mistakes.

Now, Francis has been apologizing and listening to some of those he offended most.

Last month, three men who had been molested by a Chilean priest in their youth were invited to the Vatican by Francis so he could speak with them personally and ask their forgiveness.

One of the Chilean abuse survivors, Juan Carlos Cruz, now a communications professional in Philadelphia, describes how moving the experience was for him.

“He said, ‘Juan Carlos, the first thing I want to do is apologize for what happened to you and apologize in the name of the pope, and in the name of the universal church,’ ” Cruz says in an interview on Morning Edition. “Of course it was very emotional. … I was a bit choked up and he just let me be silent or cry even … he would just sit there with me and listen to me,” he adds. They proceeded to have several hours of “very frank conversation — no topics barred.”

“The pope in January called me a liar” 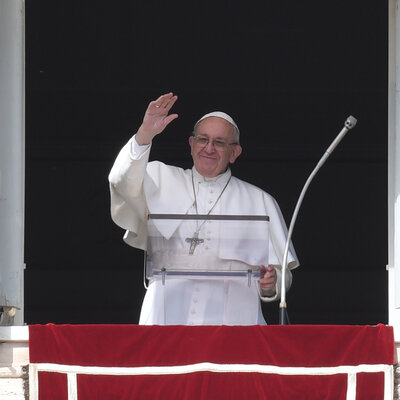 Francis asked the Holy See to refrain from revealing contents of the conversations, according to The Associated Press. But in a letter to Chilean bishops in April, the pontiff said he made “serious errors of judgment and perception” in the country’s sexual abuse cases based on “a lack of truthful and balanced information.”

The listening sessions are the latest move by the Argentine-born pope to handle a crisis that has cast a long shadow over the Roman Catholic Church. After being named pope in 2013, Francis pledged “zero tolerance” of sexual abuse and cover-ups, and he created a commission to protect minors.

But the pope has come under sharp criticism for defending accused clerics and doing too little to hold clergy accountable for abuse.

Cruz’s abuser, Chilean priest Fernando Karadima, was found guilty of sexually abusing youths by a Vatican tribunal and removed from his position in 2011. Cruz and other survivors and allies allege that top clerics including Chilean Bishop Juan Barros knew about years of abuse and did nothing. Karadima and Barros have denied wrongdoing. 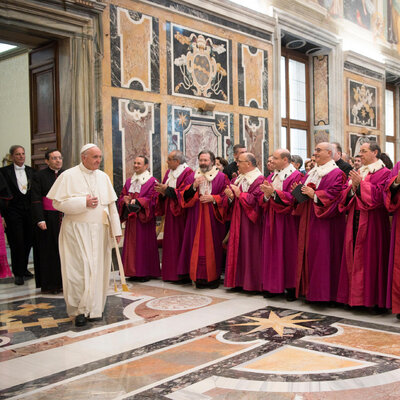 The pope caused an uproar in 2015 when he appointed Barros bishop in Osorno, Chile. This year, Francis further upset survivors when he dismissed the allegations against Barros as “slander.”

“The pope in January called me a liar,” Cruz says. “I said, ‘You cannot imagine, Holy Father, what this does to someone who is trying to tell the truth.’ ”

Cruz, who has written about his case in the book “El Fin de la Inocencia” (“The End of Innocence”), hopes his extended audience will help prod the pope to enact reforms in the church.

“He was listening and he sat right across from me and nobody was there. We talked one day three hours, another day two hours, another day an hour. … The pope cannot claim that he was misinformed like he did last time,” Cruz says.

Anne Barrett Doyle, co-director of BishopAccountability.org, a website that tracks and compiles abuse allegations against Catholic clergy, said that the listening sessions happened at all “are a testament to the graciousness of the three Chilean survivors, Juan Carlos Cruz, Dr. James Hamilton and José Andrés Murillo.”

“Although it’s good that the pope initiated these meetings, it’s important to keep in mind that he took this step only because his first strategy — attacking the survivors’ credibility — had failed,” she said, in an emailed statement to NPR.

“Meeting with survivors has proved to be a winning public relations tactic for popes and bishops. Time will tell whether these meetings were mere damage control or a precursor of desperately needed systemic change in the global Catholic church,” she added.

Cruz remained cautious before the visit to Vatican City. “When we were talking on the phone through [the pope’s] intermediary, I said, ‘I don’t want this to be a public relations exercise,’ ” he tells Morning Edition.

Cruz walked out of the meetings with Francis more hopeful, he said. On April 29, he tweeted, “Today I have more hope in the future of the church… Even though the task is enormous.”

Barrett Doyle said survivors like Cruz “have focused on the bigger picture — the plight of the many Chilean victims who have no voice, and the ongoing safety crisis in Chilean parishes and Catholic schools.”

In his conversation with NPR, Cruz repeated his conviction that he was speaking to Pope Francis not only to convey his individual plight.

“The most important thing for me was to bring with me the pain, sorrow, the destruction of so many people’s lives that have been abused,” he says. “I wanted to convey that I wanted to give the perspective of the survivor of what we go through and what people are going through, especially for those who are invisible.”

NPR’s Rachel Martin in Washington conducted the interview with Juan Carlos Cruz, who spoke from Philadelphia. Melisa Goh edited and Taylor Haney produced the audio in this story.