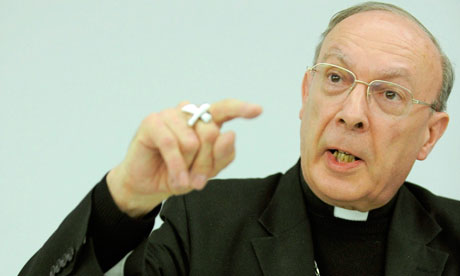 Some of the most damning evidence of systematic child abuse by the Roman Catholic clergy to come to light was unveiled today by Belgium‘s leading authority on paedophilia, who published hundreds of pages of harrowing victim testimony detailing their traumas and suffering.

The explosive report by Peter Adriaenssens in the town of Louvain, east of Brussels, lists evidence of 476 instances of child abuse by priests and bishops going back 50 years.

Adriaenssens was appointed by the church last year to head an independent inquiry into the scandal. Since April, when Roger Vangheluwe, the bishop of Bruges, resigned after admitting persistently molesting a nephew, the Adriaenssens commission has been inundated with evidence, with hundreds of victims coming forward.

He has since documented cases of abuse occurring in almost every diocese in the country and in virtually every school run by the church. “We can say that no part of the country escapes sexual abuse of minors by one or several [church] members,” said Adriaenssens.

“This is the church’s Dutroux dossier,” he added in reference to the notorious Belgian paedophile serial killer, Marc Dutroux, who kidnapped, tortured, abused and murdered six girls in 1995-6.

Speaking of the victims, Adriaenssens said that 13 had killed themselves, according to relatives, and another six had attempted suicide.

The 200-page report includes copious anonymous testimony from 124 of the victims “to honour their courage” in coming forward.

“There are days when I thank God for having the chance to speak,” testified one woman.

“Four years of psychotherapy have taught me that silence kills. I have had enormous depressions, going as far as attempted suicide. At other times I think it would be wise to let sleeping dogs lie. But in the end I’ve chosen to speak … Since the resignation of the bishop of Bruges, I am living again in anxiety and fear. And I am far away. I’ve chosen to live far from my country, hoping that the past won’t rejoin me.”

This testimony was from a woman abused in the 1980s, but most of the cases concerned young boys and teenagers, as well a documented case of a two-year-old boy being molested.

Another victim told of being repeatedly sexually molested by his parish priest for five years from the age of seven.

“From being a violated child, I myself became, several years later, an abuser of adolescents and was sentenced to eight years in jail of which I served four and a half … The priest’s violations certainly strongly shaped my sexual identity and influenced my life choices.”

The evidence presented, said the daily newspaper Le Soir, was of “immense persistent suffering which neither the church, justice, nor society have been able to assuage … Adriaenssens has done what everyone else declined to do – listen to the victims, understand them, and give them the place they deserve.”

“The exposed cases are old, of course,” he said. “Society has developed. But there’s nothing to indicate that the number of paedophiles has diminished. Where are they today?”

Most of the victims were now middle-aged, but remained traumatised. Around half of the abusers had died.

The expert unveiled his report today because yesterday a Belgian court ruled that the material, seized by police in a highly controversial raid in June, was inadmissible in court because of the “disproportionate” police action and ordered it returned.

Pope Benedict criticised the Belgian authorities for “deplorable” conduct when in June they seized the commission’s files, raided the headquarters of the Belgian Catholic church, held cardinals and bishops for several hours, took their mobile phones, and carried away computers and documents.

They questioned Cardinal Godfried Danneels, who retired as head of the Belgian church and archbishop of Brussels in January.

Two weeks ago Belgian newspapers published tape recordings of Danneels seeking to hush up the case of Vangheluwe, the Bruges bishop.

Vangheluwe’s nephew secretly recorded Danneels pressing him to keep quiet about his uncle at least until he retired next year.

“I don’t think you’d do yourself or him a favour by shouting this from the rooftops,” the cardinal warned the victim, who replied angrily that his uncle had abused him for 13 years from the age of five.

The recordings were made in April and the bishop resigned two weeks later, the most senior clergyman in the Catholic church to have quit after being exposed for child abuse.

By the CNN Wire Staff

(CNN) — The Catholic Church in Belgium released an independent report Friday detailing hundreds of assertions of sexual abuse of children by clergy and others working for the church from the 1950s into the late 1980s.

“We can say that not a single congregation escaped sexual abuse of minors by one or more of its members,” said the Commission on Church-Related Sexual Abuse Complaints, which was led by Dr. Peter Ariaenssens, who is both a church investigator and psychiatrist.

The commission said it received about 500 reports from alleged victims, about 60 percent of them from males.

It cited 320 alleged abusers, of whom 102 were known to have been clergy members from 29 congregations.

Thirteen of the alleged victims committed suicide, it said.

Investigators had information about when the abuse started for 233 of the alleged victims. Forty-eight were 12; one was 2; five were 4; eight were 5; seven were 6; 10 were 7.

Of the 230 alleged victims about whom investigators said they had reliable information, more than 70 percent are currently between the ages of 40 and 70, it said. Ten percent are 31 to 40.

At the other end of the scale, five alleged victims are aged between 80 and 90 years old and one is older than 90.

All of the alleged abusers were men.

The committee said none of the alleged cases had occurred recently.

Pope Benedict XVI has repeatedly said the Vatican will seek justice for victims. Over the summer he said that the church must promise “to do everything possible” to ensure that the sexual abuse of children by Catholic priests “will never occur again.”

Benedict said the church must “insistently beg forgiveness from God” and from victims for the sexual abuse committed by Catholic priests, and that priests must be more thoroughly vetted before joining the ministry.