“‘Impossible’ for Pell to reveal genitals from under robes, court told” & related articles

A WITNESS believes Cardinal George Pell would not have been able to remove the ceremonial robes he was wearing on the day he is accused of committing a sex offence.

CARDINAL George Pell would have been restricted by the ceremonial robes he was wearing on the day he is accused of committing a sex offence, a court has been told.

A witness, who cannot be named for legal reasons, also said he did not believe the alleged incident occurred based on his knowledge of a church’s layout.

Pell, 76, has been charged with multiple historical sex offences, which he is fighting at a committal hearing before Melbourne Magistrates Court that will determine if he stands trial.

A parish staff member on Thursday said the ceremonial robes worn by Pell at the time of an alleged offence were heavy and consisted of multiple layers.

“If we take the entirety of what he is wearing, which you have described in your statement, it was a significant number of items, correct? Heavy?” defence barrister Ruth Shann said during cross-examination.

“Requiring people to help robe and disrobe?” she continued.

When asked by Ms Shann whether the robes could be parted on the side or the middle, the man said they could not.

The man, who was also a choir member, told the hearing he had extensive experience with church robes after helping various clergy prepare for mass and other ceremonies.

The parish staff member previously told police he and other staff were always present at the time the alleged sex offences were to have taken place.

“I can’t understand, knowing the layout and how things work, how they occurred,” he told police in June 2017, before Pell was charged.

“From your perspective, it’s just not possible?” Ms Shann asked on Thursday.

“I don’t believe so,” the witness said.

The court has not released details about the charges.

But the defence has cross-examined witnesses about their interactions with Pell at a swimming pool, cinema, and a lake in rural Victoria, and other locations.

The pre-trial hearing before magistrate Belinda Wallington will resume on Friday.

It would have been impossible for then-archbishop George Pell to reveal his genitals after officiating at a Sunday Mass without somebody helping him to remove his clerical robes, a Catholic pastoral associate has told a Melbourne court.

Rodney Dearing, who was a choir member at St Patrick’s Cathedral in Melbourne during the late 1990s, told the Melbourne Magistrates Court on Thursday that Cardinal Pell would have required assistance to remove his robe after every Mass.

Cardinal Pell, 76, faces multiple historical sexual offence charges involving multiple complainants. He is facing a hearing to determine whether he stands trial. Details of the charges are yet to be revealed. He has repeatedly denied the allegations.

Mr Dearing said the robes were heavy and detailed and “not something that was easy to manoeuvre”.

He said Cardinal Pell would have required help to dress and undress before and after each Mass.

A pastoral associate who worked at St Patrick’s Cathedral in Melbourne when Cardinal George Pell was archbishop has told a court that the archbishop’s robes were heavy and could not be easily lifted or moved while being worn to expose oneself.

Rodney Dearing was cross-examined by Pell’s defence team on Thursday as part of the committal hearing into historical sexual offence charges against Pell. Dearing told the court that he was responsible for hanging up Pell’s robes and he was therefore familiar with the weight and manoeuvrability of them. 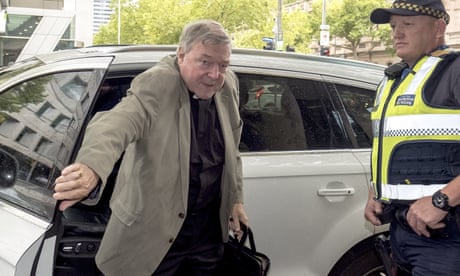 The court heard that two of the choir boys had said they had “snuck back inside” the cathedral building as the procession exited the building. But Shann told Dearing that there was a general awareness at the time Pell was archbishop of Melbourne, from 1996, “of allegations coming out generally about clergy and kids”, which would have “motivated you personally and fellow adult chorists to keep a particularly close eye on the kids”. Dearing agreed.

The defence has been cross-examining former choir boys and staff at the cathedral at the time Pell was archbishop, and suggesting to them that two missing boys would have been noticed due to the strict expectation that choirboys were to follow the rules, the close eye staff kept on the choir and the layout of the building and grounds.

On Thursday morning Peter Finnigan, who used to manage the choir, told the defence team that while he did not recall two boys going missing at any stage, “it would certainly be possible”.

“But they would certainly be very naughty boys if they did,” he said.

Pell is the highest-ranking Vatican official to be charged in the Catholic church’s long-running sexual abuse scandal. He has taken leave from the Vatican in Rome to attend court. He has strenuously denied all allegations.

When the hearing adjourns magistrate Belinda Wallington will need to decide if there is enough evidence to order Pell to stand trial accused of historical sexual offences. Further description of the charges cannot be given for legal reasons.