Cardinal George Pell has been taken in custody following a sentencing hearing in which his lawyer, Robert Richter, described one of Pell’s offences as a “plain vanilla sexual penetration case where the child is not actively participating”.

After the hearing, with Pell’s lawyer having withdrawn his application for bail, the chief judge, Peter Kidd, said: “Take him away, please.” Pell will be sentenced on 13 March after his conviction for sexually assaulting two 13-year-old boys.

The former prime minister John Howard was among those who provided character references for Pell as the cardinal’s legal team tried to argue for a lower-end sentence in Melbourne’s county court on Wednesday morning.

That claim was rejected by the chief judge, Peter Kidd, who said he saw Pell’s behaviour as “callous, brazen offending” and “shocking conduct”.

“He did have in his mind some sense of impunity. How else did he think he would get away with this? There was an element of force here … this is not anywhere near the lower end of offending.”

Richter’s renowned defence style was on full display, as he tried to argue with Kidd that there were “no aggravating circumstances” to one of Pell’s offences.

It was “no more than a plain vanilla sexual penetration case where the child is not actively participating”, Richter said.

Kidd responded: “It must be clear to you by now I’m struggling with that submission. Looking at your points here – so what?”

Richter also tried to suggest that an incident in which Pell grabbed one of the boys by the genitals in an attack that lasted seconds was “fleeting” and not worthy of a jail sentence. Kidd disagreed.

“That wasn’t just a trifling sexual assault,” he said.

“Nothing is to be gained here by comparing different forms of sexual abuse of children. Of course I need to make a judgement of the overall gravity of this. But there is a limit to these kinds of comparisons.”

Abuse survivors and advocates present in the court gasped as Richter made his arguments for a lower-end sentence. He said at one point that if Pell’s victims were “truly distressed” after being abused, they would have returned to their homes exhibiting that distress.

Richter said he was in a difficult position because he could only propose a sentence based on the jury’s finding of guilt, not on the basis that Pell maintained his innocence. He said Pell did not have a pattern of offending and had not planned the attack, and so would have been “seized by some irresistible impulse”.

Kidd responded: “You put to the jury only a madman would commit these offences. The jury rejected that. There are no medical records suggesting he is mad. The only inference I can make is that he thought he could get away with it. People don’t go ahead and do what he did without thinking about it. People make choices.”

Prosecutors described Pell as having “a degree of callous indifference” as he “humiliated, degraded” and sexually abused the boys. This offending, prosecutors said, should attract a significant sentence.

Prosecutor Mark Gibson said the offending of Pell was serious, especially given his position of authority at the time.

“These acts … were in our submission humiliating and degrading towards each boy and gave rise to distress in each boy as referred to in the evidence [the complainant] gave. [The victim] recalled voicing objection.”

He said Pell’s offending implied “a degree of callous indifference in relation to those objections”.

“His state of mind suggests he had some degree of confidence as to the unlikelihood that these two boys would complain,” he said.

In response, Richter submitted a book of sentencing arguments to Kidd, which included medical records and character references from high-profile figures including Howard and the president of the Australian Catholic University, Greg Craven. Richter said he could have provided the court with “hundreds” of character references for Pell, but had narrowed the list down. All those who gave references knew of Pell’s conviction, he said.

The character references spoke of Pell’s kindness and generosity “above and beyond that of a priest”, of “a man who has a great sense of humour” who relates “to everyone “from prime ministers to street cleaners”, Richter said. 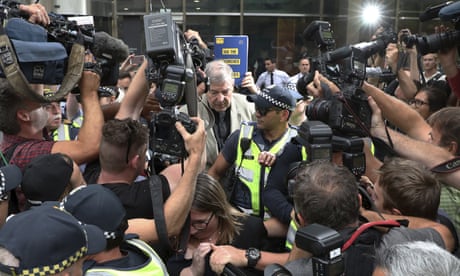 The hearing was attended by dozens of abuse survivors and advocates, as well as supporters of Pell. The survivors wore badges emblazoned with quotes about child abuse from Pell over the years; “it was not of much interest to me” and “it’s all gossip until it’s proven in a court”.

Each conviction carries a maximum jail term of 10 years.

At the trial the complainant, now 35, said he and the other choirboy had separated from the choir procession as it exited the church building. He and the other boy sneaked back into the church corridors and entered the priest’s sacristy, a place they knew they should not be. There they found some sacramental wine and began to drink. The complainant alleged that Pell had walked in on them. 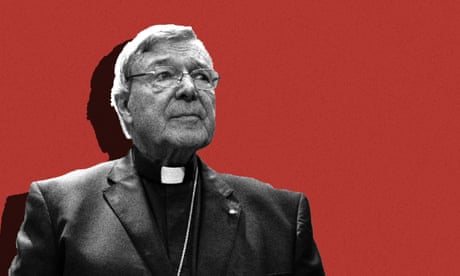 A few weeks later Pell attacked the complainant again as he passed him in the church corridor, pushing him against the wall and squeezing his genitals hard through his choir robes, before walking off.

There was some argument from Richter as to whether the entirety of the father’s victim impact statement should be submitted, given his statement made in February was “so lacking in proximate impact” to the offending.

Kidd said he would not be swayed by the argument.

“I think a parent where a child is a victim of a crime … the impact of the fact of that crime and the distress that would cause to a parent is self-evident and almost inevitable,” Kidd said. “My view is the parent can stand in as victim in those circumstances.”

On Wednesday afternoon Pell’s solicitor Paul Galbally issued a statement saying the bail application had been withdrawn because Pell “believes it is appropriate for him to await sentencing”.

“An appeal has already been lodged to be pursued following sentencing,” the statement said. “Despite the unprecedented media coverage, Cardinal Pell has always and continues to maintain his innocence.”