Cardinal George Pell has been found guilty and is set to be jailed for child sexual abuse in the most sensational verdict since the Catholic church became engulfed in worldwide abuse scandals.

Pell, who was Vatican treasurer, close to the Pope and the most senior Catholic figure in the world to be charged by police with child sex offences, has been found guilty of orally raping one choirboy and molesting another in Melbourne’s St Patrick’s Cathedral 22 years ago.

Australian media has been unable to report the guilty verdict until now, due to a suppression order.

A second trial, over allegations Pell abused boys in a swimming pool in Ballarat in the 1970s, has now been abandoned due to lack of admissable evidence and the suppression order lifted.

The cardinal was Archbishop of Melbourne when he abused the two 13-year-old boys and was managing the church’s response to widespread child abuse by priests through the “Melbourne Response”, which he designed.

He was found guilty in a retrial last December, with the verdict sending shockwaves through the Vatican and around the world. A jury in an earlier trial was discharged, in September, when it was unable to reach a verdict. His legal team will appeal against the conviction. 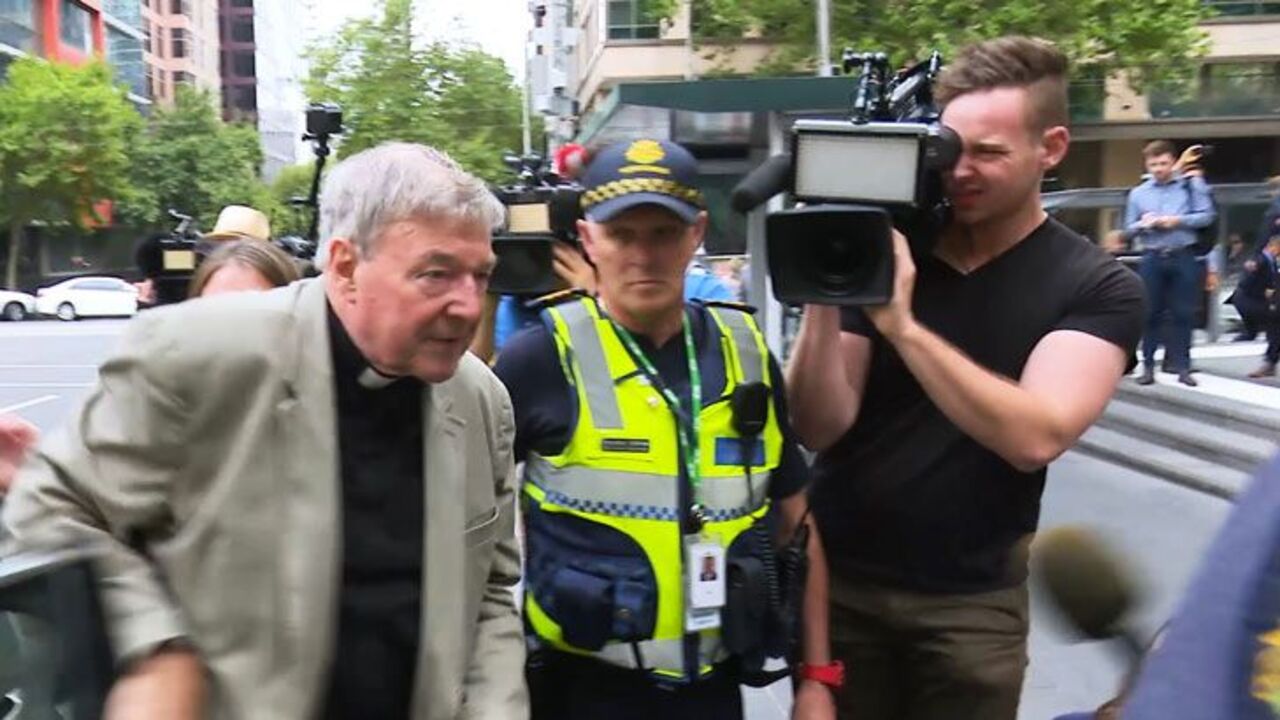 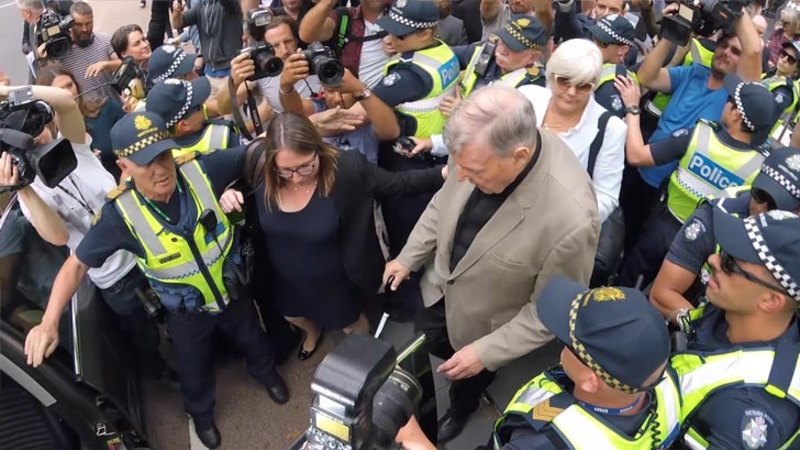 County Court Chief Judge Peter Kidd has now revoked the suppression order that prevented media reporting the results of the trial and retrial.

Pell emerged from the court building about 11.30am to a huge media pack. Flanked by police officers, he was jeered and abused by some people outside.

“You’re an absolute animal,” one man shouted at him as police and protective services officers ushered the cardinal to a waiting car.

Pell’s victim released a statement via his lawyer, thanking his family for their support and the wider public for their interest in the case. He said the process had been stressful and was not over yet.

“At some point we realise that we trusted someone we should have feared and we fear those genuine relationships that we should trust.”

“Cardinal George Pell has always maintained his innocence and continues to do so,” Pell’s lawyer Paul Galbally said in a statement on Tuesday.

“Although originally the Cardinal faced allegations from a number of complainants, all charges except for those the subject of the appeal have now been either withdrawn, discharged or discontinued. He will not be commenting in the meantime.”

Pell was stripped of his position as the Vatican’s chief financial officer and expelled from Pope Francis’ inner circle of trusted cardinals known as the Group of Nine, or C-9, shortly after the verdict, but due to the suppression order the world’s media was forced to pretend Pell, 77, stepped down due to his age.

On December 11, when Pell was found guilty of five charges including sexual penetration of a child under 16 – a charge his lawyer, Robert Richter, QC, likened to “oral rape” – the cardinal was granted bail and allowed to travel to Sydney to have knee surgery before he was due to face another trial on more sex abuse charges.

Pell will be the highest ranking Catholic figure in the world to be jailed for child sex abuse.

Each of the five charges of which Pell has been found guilty carries a 10 year maximum prison term.

Judge Peter Kidd has said Pell will be remanded in custody after a pre-sentence hearing on Wednesday. He is likely to be sentenced in the fortnight after that hearing.

There was an audible gasp in the courtroom on the afternoon of December 11 when a jury found Pell guilty of one charge of sexual penetration of a child under 16 and four of committing an indecent act with, or in the presence of, a child under 16.

The cardinal pursed his lips and stared at the floor, frowning, as he sat in the dock while the guilty verdicts were read out.

Pell’s victims were two 13-year-old St Kevin’s College students who were choirboys at St Patrick’s Cathedral when they were assaulted in December 1996 and February 1997. Both incidents took place after Sunday mass and while Pell was robed.

In the first incident, the choirboys broke away from a procession outside the cathedral and snuck back into the sacristy – a room where priests dress for mass – and were swigging sacramental wine when Pell walked in.

Pell, dressed in his Archbishop’s robes, told the boys they were in trouble and then exposed himself.

He pushed one of the boys close to his penis, before turning to the second boy and putting his penis in the boy’s mouth.

Pell then masturbated as he fondled the second boy’s genitals.

In 1997, Pell pushed one of the boys against a wall in a cathedral hallway and squeezed the boy’s genitals.

The second boy, who is now in his 30s, reported the allegations to police in 2015. He gave evidence across three days, and at one point said the offending was “something I’ve carried for the whole of my life”.

The other victim died several years ago from a heroin overdose. He never reported the abuse and denied anything happened when he was asked by his mother.

Yet the evidence of the second victim was “powerful and persuasive” and withstood scrutiny under hours of cross-examination, Crown prosecutor Mark Gibson, SC, said.

The victim, who cannot be named for legal reasons, told the jury he was in shock after the abuse and didn’t report it for years, partly out of fear he wouldn’t be believed.

“What would I do if I went forward and said such a thing about an archbishop?” he said.

He also feared his school scholarship would be jeopardised if he reported the offending.

“If I mentioned anything like that to anyone it would be a pretty big deal,” he said.

“It would be something that I thought perhaps would be dismissed or not acknowledged and I knew that a scholarship [was] something that could be given and taken away, even at that age, and I didn’t want to lose that. It meant so much to me.”

So, he said, he put the events into one of the “dark corners or recesses” of his brain.

Mr Richter, who has previously accused Victoria Police of running a “get Pell operation”, told the jury the allegations were a “far-fetched fantasy”.

It would have been impossible for two choirboys to break away from the procession unnoticed and enter the priests’ sacristy, Mr Richter said.

He argued Pell was never left alone by church officials while robed as the Archbishop after mass.

“Only a madman would attempt to rape boys in the priests’ sacristy immediately after Sunday solemn mass,” Mr Richter said during the retrial.

Pell had just launched the controversial “Melbourne Response” to child sexual abuse when he assaulted the two boys in 1996.

It later emerged that victims who sought compensation through the Melbourne Response received far smaller payouts, capped at $50,000, than they would have if they had gone through the courts. The response was criticised for doing more to protect the church and minimise its financial costs than helping victims.

The suppressed verdict and the pending appeal

Pell was due to face another trial, charged with molesting boys in a Ballarat swimming pool in the 1970s while he was a priest in his Victorian hometown.

But on Tuesday, prosecutor Fran Dalziel, SC, told the court the trial involving the swimmers would no longer go ahead because there was not enough admissable evidence to proceed. That paved the way for Judge Kidd to revoke the suppression order.

Pell’s lawyers last week lodged an appeal with the Court of Appeal, and Mr Richter said on Tuesday he would challenge the verdict on the grounds it was unreasonable and contrary to the evidence the jury heard.

“This is not a frivolous appeal. There are substantial reasons to believe the verdict may be set aside for one reason or another,” he said.

The Court of Appeal has the power to quash a conviction and order a retrial.

Mr Richter is likely to request the that court grant Pell bail while reviewing the case, but he conceded a jail term was inevitable if the conviction ultimately stood.

Media lawyers urged Judge Kidd to revoke the order immediately given the high public interest in the case. Ms Dalziel supported the media in their application.

After an adjournment, Mr Richter announced he was withdrawing his opposition to the suppression order being revoked, which allowed Judge Kidd to grant media permission to report the story.

In revoking the suppression order, Judge Kidd said there was a “very strong” ground for the public to be informed of Pell’s guilt and his eventual sentence given the high public interest in the case.

Pell was found guilty about three months after a jury in the earlier trial was unable to reach a verdict on the same charges and was discharged, which forced a retrial.

The revelations about Pell come in the same month that the Catholic church defrocked former cardinal Theodore McCarrick, once the Archbishop of Washington DC, after he was found guilty of sex crimes.

Last week the church held a four-day summit at the Vatican on how best to tackle pedophilia within the clergy.

The charges against George Pell

Pell was previously accused of sexually assaulting an altar boy, then 12, at a camp at Phillip Island in 1961. In 2002 a retired Supreme Court judge, hired by the church to investigate, found he was not satisfied the complaint was ever established.

In recent years, another man also reported to media that he saw Pell expose himself to three boys at the Torquay life saving club in 1986 or 1987. Pell denied both allegations.

The jury of eight men and four women in the retrial found Pell guilty after deliberating for three and a half days.

Pell stayed in the dock for some time once the verdict was delivered. He held hands with Mr Richter for a moment and shook the hands of his other supporters, including former deputy prime minister Tim Fischer, who was regularly in court during the retrial. Mr Fischer is also a former Australian ambassador to the Holy See.