The cardinal’s appeal will be made on three points, according to the appeal document.

MELBOURNE, Australia — An Australian court announced Wednesday that Cardinal George Pell’s application for leave to appeal his conviction of sexual abuse will be heard June 5-6.

Cardinal Pell, 77, was convicted in December on five counts of sexual abuse stemming from charges that he sexually assaulted two choirboys while serving as archbishop of Melbourne in 1996. He has maintained his innocence.

It was the cardinal’s second trial, as a jury in an earlier trial had failed to reach a unanimous verdict. The first jury were deadlocked 10-2 in Cardinal Pell’s favor.

Cardinal Pell’s appeal will be led by barrister Bret Walker, who will be assisted by Robert Richter, the cardinal’s defense lawyer; Paul Galbally, his solicitor; and Ruth Shann, Richter’s junior barrister.

The cardinal’s appeal will be made on three points: the jury’s reliance on the evidence of a single victim, an irregularity that kept Cardinal Pell from entering his not guilty plea in front of the jury, and the defense not being allowed to show a visual representation supporting his claim of innocence.

The appeal document, The Age reported, says that “the verdicts are unreasonable and cannot be supported, having regard to the evidence, because on the whole of the evidence, including unchallenged exculpatory evidence from more than 20 Crown witnesses, it was not open to the jury to be satisfied beyond reasonable doubt on the word of the complainant alone.”

Cardinal Pell is incarcerated at the Melbourne Assessment Prison while he awaits the results of a sentencing hearing. He will be sentenced at a hearing March 13.

In December, a district judge overturned the May 22 conviction of Archbishop Philip Wilson for failing to report allegations of child sexual abuse disclosed to him in the 1970s, saying there was reasonable doubt a crime had been committed.

The judge, Roy Ellis, said acceptance of the accuser “as an honest witness does not automatically mean I would be satisfied beyond reasonable doubt that he complained to Philip Wilson in 1976 that James Fletcher had indecently assaulted him.”

The news of Cardinal Pell’s conviction has met with varied reactions. While many figures in Australian media have applauded his conviction, some Australians have called it into question, prompting considerable debate across the country.

Greg Craven, vice chancellor of the Australian Catholic University, suggested that the justice process was tainted by media and police forces that had worked “to blacken the name” of Cardinal Pell “before he went to trial.”

Cardinal Pell was ordained a priest of the Diocese of Ballarat in 1966. He was consecrated a bishop in 1987 and appointed auxiliary bishop of Melbourne, becoming ordinary of the see in 1996. He was then archbishop of Sydney from 2001 to 2014, when he was made prefect of the newly created Secretariat for the Economy. He served on Pope Francis’ “council of cardinals” from 2013 to 2018. Cardinal Pell ceased to be prefect of the economy secretariat Feb. 24.

As Cardinal Pell awaits sentence, his appeal is fast-tracked to June

A woman puts a ribbon on the fence of St. Patrick’s Cathedral in Ballarat, Australia, Feb. 27, 2019. The ribbons raise awareness and show support for victims of abuse. (CNS/Jonathan Barrett, Reuters)

Sydney, Australia — Australian Cardinal George Pell, the highest-ranked Catholic clergyman to be found guilty of child sexual abuse, has had his appeal process fast-tracked and might spend only three more months behind bars before it is heard.

The Victorian Supreme Court has set June 5 and 6 for the bid for an appeal to be heard and any subsequent appeal hearing over which three justices of the Australian state’s highest court will preside.

Lawyers who spoke who Catholic News Service on the condition of anonymity said the appeal date was unusually soon given most appeals hearings are set a year or more in advance. They also noted it was unusual for an appeal date to be set before a sentence has been handed down.

Pell is in jail in Melbourne awaiting his March 13 sentencing after being found guilty in December of five historic sex offenses against two choirboys, including oral rape. The sentence was revealed Feb. 25 after a gag order on the case was lifted when a second trial of the former senior adviser to Pope Francis was pulled by prosecutors. Pell withdrew an application for bail during the period between his sentence and appeal.

Prominent Sydney lawyer Bret Walker will replace Pell’s original defense counsel, Robert Richter, who has been criticized for mismanaging the cardinal’s defense and drew criticism for remarks at the sentencing hearing Feb. 28. The following day, Richter issued a lengthy written apology after he appeared to denigrate the severity of the abuse that saw one victim commit suicide at 35.

Beyond his appeal, Pell is facing a civil trial after a man alleged the cardinal sexually assaulted him Ballarat, Australia, during the 1970s. The complainant, who has not been named, was one of those who was due to appear for prosecutors in Pell’s second trial, scheduled for April but withdrawn by prosecutors Feb. 25.

The plaintiff was a ward of the state at the St. Joseph’s Boys Home in Ballarat at the time of the alleged incident; he is suing Pell; the trustees of Nazareth House, which ran the home; the state of Victoria; and the Archdiocese of Melbourne.

The lawsuit was lodged a day after Australia’s bishops and priests addressed Pell’s conviction for sexually assaulting two 13-year-old choirboys when he was archbishop of Melbourne in 1996.

Archbishop Anthony Fisher of Sydney told the congregation at Sydney’s St. Mary’s Cathedral March 3 not to be “too quick to judge” the cardinal.

“As the cardinal’s matter is ongoing in the courts, I cannot comment on the substance; I urge people not to draw any final conclusions until the appeal judges have had their chance to review this matter. Amid the heated emotions of the present, I also pray for public calm and civility,” said Fisher, who added he saw “serious questions for the appellate court to examine.”

“If we are too quick to judge, we can end up joining the demonizers or the apologists, those baying for blood or those in denial.”

The verdict has been questioned publicly by Pell’s supporters in the church and in the Australian media.

Australia’s former prime minister, the Jesuit-educated, one-time seminarian Tony Abbott, who ran the country from 2013 to 2015, also weighed in.

Melbourne Archbishop Peter Comensoli told his parishioners that the soul of the Catholic Church “has been grievously wounded from the evil of sexual abuse.”

“It feels like we have reached Golgotha (the place where Christians believe Jesus was crucified), where the smell of death is thick in the air and the sense of panic and confusion is pervasive.”

Comensoli pointed to the “vastly divergent positions” people had taken on Pell’s conviction, “from cries of condemnation to cries of injustice.”

“What has spoken to me in all these posts and tweets is that they express something of the point of desolation at which God’s church in Melbourne has arrived,” he said.

A man who says he was molested by George Pell when he was a boy in the 1970s will file a lawsuit against the disgraced cardinal in Victoria’s Supreme Court.

The suit, expected to be lodged this week, names Pell, the trustees of the Sisters of Nazareth (formerly St Joseph’s), the Catholic Archdiocese of Melbourne and the State of Victoria.

The complainant alleges he was a victim of physical and sexual abuse while in care at Ballarat’s St Joseph’s Boys Home between February 1974 and 1978. Cardinal George Pell arrives at County Court in Melbourne. The senior Catholic cleric has been found guilty of assaulting two boys in the 1990s.

The 50-year-old was a complainant against Pell in a criminal trial over allegations the cardinal indecently assaulted boys in Ballarat in the 1970s.

That criminal trial was dropped by prosecutors last week, though the complainant’s matter was dropped late last year after prosecutors did not have sufficient evidence to proceed.

The complainant has now elected to take the matter forward, via a personal civil action against Pell and other church and state entities,  including the trustees of the Sisters of Nazareth (formerly St Joseph’s), the Catholic Archdiocese of Melbourne and the State of Victoria

“It took a lot of courage and soul searching to be prepared to tell my story, accusing one of the most senior Catholics in the world of serious criminal offences and eventually I was resigned to having my day in court,” the man said. “But when I was told they had withdrawn the case I felt empty and that an injustice had occurred.”

In a statement of claim, the man alleges Pell sexually abused him three or four times in a swimming pool at the home.

At the time, he knew the man’s name was George and that he was sometimes called “Father”, but only realised after seeing him on television years later it was the now-disgraced cardinal.

Pell was found guilty in December of separate allegations, relating to the sexual abuse of two boys at St Patrick’s Cathedral in East Melbourne in 1996.

He has filed an appeal application with the Court of Appeal over his conviction.

He has also consistently denied all other claims of abuse or inappropriate conduct.

Arnold Thomas & Becker lawyer Lee Flanagan said they hoped to include the evidence of three other men who were complainants in the so-called  “swimmer’s trial” against Pell.

Two alleged Pell abused them at Ballarat’s Eureka Swimming Pool around the same time, while the third alleged the abuse happened at Lake Boga. Pell denied all these claims of abuse, and this trial was ultimately withdrawn due to lack of admissible evidence. 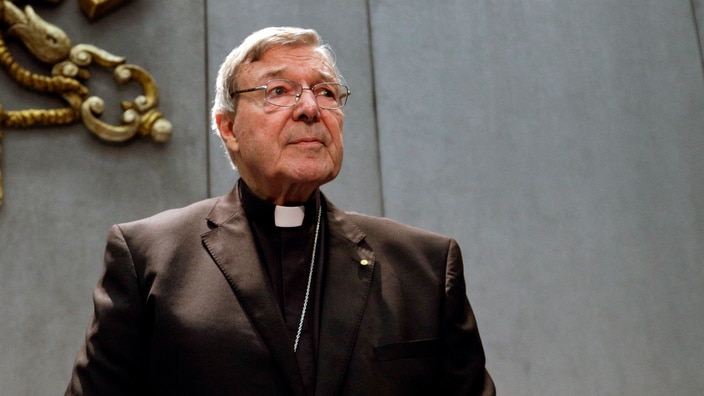 The complainant alleges the man was a victim of physical and sexual abuse while in care at Ballarat’s St Joseph’s Boys Home between February 1974 and 1978.

In addition to the complainant’s allegations relating to Pell, the complainant also separately alleges physical abuse while at the home, including that a nun, named Sister Victoire, would hit him and one time rubbed his excrement in his face after he soiled his pants.

The complainant also alleges physical abuse while at the home, including that a nun, named Sister Victoire, would hit him and one time rubbed his excrement in his face after he soiled his pants.

He is suing for medical expenses and loss of earning capacity, claiming the abuse led him to suffer chronic post-traumatic stress and anxiety syndrome, chronic adjustment disorder, emotional attachment disorder and alcohol abuse or use disorder.