Cardinal George Pell has said he will not be drawn into responding to criticism by the counsel assisting the royal commission on child sexual abuse.

A submission from Gail Furness SC and Stephen Free, the counsel, argued that based on the cardinal’s’s evidence to the commission, as well as evidence from Catholic Education Office staff and child sexual abuse victims, Pell should have taken stronger action against a paedophile priest, Peter Searson. 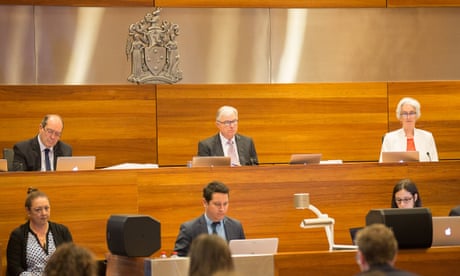 ‘No one listened’ to hundreds of complaints about priest, says principal

Searson was the parish priest of Doveton, south-east of Melbourne, from 1984 until 1997. Pell, now the Vatican’s financial controller in Rome, was at the time auxiliary bishop of the Archdiocese of Melbourne and oversaw positions such as Searson’s.

The commission has previously heard Searson abused children in parishes and schools across three districts over more than a decade, and displayed strange behaviours such as animal cruelty and carrying a gun to school.

During his evidence before the commission in March, Pell said investigating Searson was not his responsibility because he believed the Catholic Education Office and the Bishop of Ballarat, Ronald Mulkearns, were handling the allegations.

But in their response to Pell’s evidence published on Monday, Free and Furness wrote that it should have been Pell’s responsibility to take such action to remove Searson. The commission previously heard that Pell had been informed by parish staff of Searson’s behaviour, and that in 1989, a number of staff from the Holy Family parish and school in Doveton approached Pell about Searson’s conduct, including his harassment of children. 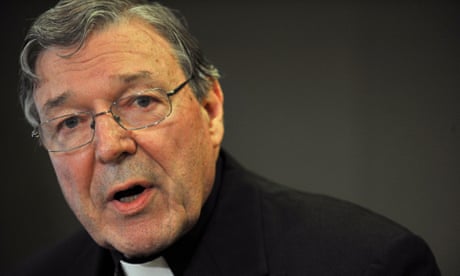 Pell’s submissions published by the commission maintained he did not have enough evidence about Searson’s behaviour to take action at the time.

“Considering the attention given to Searson and the issues in Doveton during Cardinal Pell’s evidence, one might be forgiven for thinking that his involvement with Searson was extensive,” his submission said.

“It was not. The most significant interaction Bishop Pell had with Searson was when he met with a delegation of teachers in 1989 … a meeting organised by a representative of a teachers’ union so that the teachers could air their workplace grievances about Searson.

Pell also said Catholic Education Office staff deliberately kept information about the extent of Searson’s abusing from him because they feared if Pell found out, he would take strong action against Searson.

Furness and Free urged the commission to reject this evidence.

“It is submitted that the commission should reject Cardinal Pell’s evidence that officers of the CEO intentionally deceived him and did so for the reasons suggested by Cardinal Pell,” their submission read.

Searson died in 2009 without facing charges.

Cardinal George Pell and other senior officials failed to exercise proper care for children in a Melbourne parish by not acting on information of sexual misconduct by a paedophile priest, according to final submissions to the royal commission into child abuse.

In her submissions to the Royal Commission into Institutional Responses to Child Abuse, Counsel Assisting Gail Furness SC also stated she believed the evidence of a number of witnesses in the Ballarat and Melbourne dioceses instead of Cardinal Pell’s in relation to the Cardinal being told by children and adults of inappropriate clerical conduct towards children in the 1970s and 1980s.

Counsel Assisting has found that Cardinal Pell, along with a number of other priestly consultors to Bishop Ronald Mulkearns of the Ballarat diocese, knew notorious serial paedophile priest Gerald Ridsdale was being moved from parish to parish because he was sexually abusing children, despite the Cardinal’s strong denials.

Allegations about Ridsdale’s behaviour were never sent to police.

The report has been released less than a week after Victoria Police confirmed three of its Taskforce SANO detectives had flown to Rome to interview the Cardinal separately about historic child abuse allegations, which he has strongly denied.

The consultors meeting, where the submission says Cardinal Pell should have known, took place at the same time as some of the worst offending was committed by Ridsdale in the parish of Mortlake.

It was estimated by the nun who was school principal that he abused 20 of the 30 boys at the school.

“It is submitted it was the common understanding of the [1982] meeting that complaints that Ridsdale had sexually abused children was the reason it became necessary to move him,” she said in the submission.

“The conduct of any consultor who agreed to move Ridsdale, or indeed any priest, with knowledge of allegations of child sexual abuse made against them, is unacceptable.”

Counsel Assisting has believed the evidence of survivor Tim Green, who was abused by Brother Edward Dowlan at St Patrick’s College in Ballarat, that he told Cardinal Pell that Dowlan was “touching little boys” at Ballarat’s Eureka Pool in 1974 and that the then-father Pell replied, “don’t be so ridiculous”, rejecting Cardinal Pell’s submission that it did not take place, arguing that he may have forgotten it.

“It is submitted that the evidence establishes that between 1973 and 1975, Father Pell was told by at least one student and one or two priests about Dowlan’s infractions of a sexual nature with minors,” the final submissions say.

In the parish of Doveton, parish priest Peter Searson stayed for 12 years after student Julie Stewart first ran out of the confessional in tears to her principal having been abused by Searson.

He went on to physically and sexually abuse other children. A delegation of parents went to then-Auxiliary Bishop George Pell with a list of grievances about Peter Searson in 1989.

Counsel Assisting rejected Cardinal Pell’s evidence from Rome in February that he was deceived by officials from the Catholic Education Office — the Cardinal had said “this was a world of crimes and cover-ups”.

“Cardinal Pell [and other bishops], as senior members of the Archdiocese and of the Curia and PAB personally received allegations of aberrant behaviour by Searson,” barristers Gail Furness SC and Stephen Free said in their their final submissions.

“Notwithstanding the knowledge of these individuals, no action was taken to remove Searson until March 1997.

“The matters known to Cardinal Pell on his own evidence (being the matters on the list of incidents and grievances and the ‘non-specific’ allegation of sexual misconduct) were sufficient that he ought reasonably have concluded that more serious action needed to be taken in relation to Searson.”

Ms Furness said one option open to Bishop Pell was that Searson be “removed or suspended”.

“At the very least a thorough investigation needed to be undertaken as to the veracity of the complaints, in particular the allegation of sexual misconduct. It appears that Cardinal Pell concluded that no such action was required because the teachers did not ask for Searson to be removed.

“That was not a satisfactory response.”

Cardinal Pell’s submissions in reply to the Counsel Assisting set out a robust denial of the conclusions Ms Furness makes.

“The Commission could not be ‘comfortably satisfied’ that any of the allegations made against Cardinal Pell has been made out,” Cardinal Pell’s lawyers wrote in their submissions.

“It is important that when one comes to judge conduct of someone in the 1970s, that judgment is undertaken in the context of states of mind which existed at that time and not by reference to the greater community appreciation which has formed in later years.”

In relation to Ballarat, Cardinal Pell said in his submissions in reply there was not a “scintilla” of evidence that he knew of the allegations against Gerald Ridsdale, for instance, while a consultor to Bishop Ronald Mulkearns.

Cardinal George Pell knew enough to conclude that more serious action should have been taken against a paedophile priest, according to counsel assisting the child sex abuse royal commission.

In their submission to the royal commission, published on Monday, counsel assisting Gail Furness SC and Stephen Free urged the commission to reject evidence from Australia’s highest ranking Catholic that he had been intentionally deceived about former Doveton priest Peter Searson. Cardinal Pell, who testified to the commission in March via video link from Rome, said he was told about Searson’s bizarre behaviour in 1989, when he was an auxiliary bishop. But he said the reports of Searson abusing animals and going to the children’s toilets were not enough for him to act and that it was not his responsibility to investigate the priest.

He also said allegations against Searson had been kept from him by the Catholic Education Office, but claims of a cover up were denied by former Catholic officials who testified before the royal commission earlier this year. In their written submission, Ms Furness and Mr Free said that there was no evidence the CEO intentionally concealed information it received about Searson. It urged the royal commission to find that the CEO “had no motive to deceive Cardinal Pell and did not do so”.

“It is submitted that the commission should reject Cardinal Pell’s evidence that officers of the CEO intentionally deceived him and did so for the reasons suggested by Cardinal Pell,” they said.

“Those CEO officers, who are available to give evidence about these matters, gave evidence to the effect that they had no interest in deceiving Cardinal Pell or in trying to protect Searson. That evidence should be accepted. It is generally consistent with other evidence available to the Royal Commission.”

There were complaints about Searson’s behaviour for more than a decade while he was parish priest at Our Lady of Mount Carmel in Sunbury and at Holy Family in Doveton. They included that he carried a handgun at school, killed animals, showed children a body in a coffin and frequented the boys toilets. The royal commission has heard he would tape “hot” confessions with children and in 1993 Searson admitted holding a large knife to a child’s chest.

In their submission, Ms Furness and Mr Free said that a list of grievances about Searson and an allegation of sexual misconduct against him, both referred to Cardinal Pell, were “sufficient that he ought reasonably have concluded that more serious action needed to be taken”.

“It was incumbent on Cardinal Pell, having regard to his responsibilities as Auxiliary Bishop, including for the welfare of children in the parish, to take such action as he could to advocate that Searson be removed or suspended, or, at least, that a thorough investigation be undertaken. While the authority to remove Searson from his role as parish priest lay with the Archbishop, Cardinal Pell had direct access to the Archbishop, including through the Curia,” the submission said.

“Cardinal Pell should also have taken direct action of his own to investigate the veracity of the complaints, in particular the allegation of sexual misconduct. His failure to take any such action meant that Cardinal Pell, like other senior officials in the Archdiocese before and after him, missed an important opportunity to recognise and deal with the serious risks posed by Searson. Cardinal Pell and other senior Archdiocesan officials failed to exercise proper care for the children of Doveton.”

Last year, Melbourne Archbishop Denis Hart said there was a “complete failure” of processes in the Melbourne Archdiocese when dealing with child sex abuse complaints, and described as “just a horror story” allegations in Doveton.

“I have just been totally appalled by the extent and the depravity of the offenders and the suffering and ruination of lives of the survivors,” he told the royal commission at the time.

According to Archbishop Hart, the failure stemmed from the office of Cardinal Pell’s predecessor, Archbishop Frank Little.

He said it did not include Cardinal Pell, who was Melbourne archbishop from 1996 to 2001, but that he would have expected him to have had an “adequate degree of knowledge” of what was happening in Doveton, where a succession of paedophile priests were sent over three decades.

Searson’s faculties as a priest were removed in 1998, but he died in 2009 before facing any child sex charges. The church has paid almost $300,000 to his victims.