BUENOS AIRES, Argentina — A Roman Catholic priest who is serving a 15-year jail sentence in Argentina for sexually abusing a boy has been banned from performing priestly duties.

Church officials said any further decision about the priest would await final action on his appeal in Argentina’s courts.

Well-known for persuading Argentine celebrities to donate to the Happy Children Foundation, Grassi was transferred to a maximum security prison Tuesday, a day after he began serving his sentence.

Grassi had previously been free despite charges of abusing the teenager in 1996.

He continued living across the street from the orphanage after his 2009 conviction while he appealed. Grassi was taken into custody Monday after the top provincial court upheld his sentence.

The 57-year-old priest says he’s innocent. He will now make his final appeal to Argentina’s Supreme Court from prison. 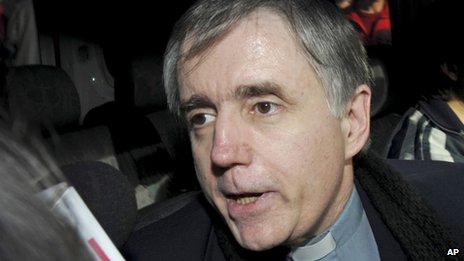 A prominent Roman Catholic priest in Argentina has been jailed, four years after being convicted of sexually abusing a teenage boy.

A court in Buenos Aires province rejected an appeal by Father Julio Cesar Grassi, who has been sentenced to 15 years in jail, to remain under house arrest.

He was convicted in 2009 of abusing the boy at his “Happy Children” foundation.

He insists he is innocent and says the case is based on false evidence.

“In my life, all I have done was to help the children in need,” he said at the criminal court in the city of Moron.

“The prosecutors have lied and set up a case against me.”

Prosecutor Alejandro Varela argued that there was a risk that the priest would escape if he was not detained.

“To leave Grassi free is almost like colluding with his crime,” said Mr Varela.

After a hearing which ended with an emotional plea by Father Grassi, the criminal court in Moron unanimously ordered his “immediate detention”.

He was taken to a nearby jail.

“I am in peace, I believe in God,” Father Grassi said.

A lawyer for the prosecution, Juan Pablo Gallego, described him as “a convicted paedophile, who is out of control”.