South Africa’s Archbishop of Durban, Wilfrid Fox Napier, apologized on Monday for offending victims of child abuse after he described pedophilia as a “mental illness” and not a crime during a recent BBC interview.

“I apologize sincerely and unreservedly to all who were offended by the botched interview, and especially to those who have been abused and need every help and support that the Church can give,” Napier said in a statement released on Monday. “Child sexual abuse is a heinous crime among other things because of the damage it does to the child. In that concern I include the abused who has become an abuser.”

Napier, who was one of the 115 Catholic Cardinals to help elect Pope Francis, acknowledged that the “wheels came off” during the interview, but contended that his remarks had been taken out of context. He added that he was “afforded no time to explain that the priority of pastoral concern must always be for the victim.

In the live interview with BBC Radio 5 on Saturday, Napier described pedophilia as a “disorder” requiring treatment and said that pedophiles should not be looked upon as criminals.

“From my experience, pedophilia is actually an illness. It’s not a criminal condition, it’s an illness,” Napier said.

He cited two Catholic priests he knew of who were sexually abused as children and went on to become pedophiles themselves.

“Now don’t tell me that those people are criminally responsible like somebody who chooses to do something like that,” Napier said. “I don’t think you can really take the position and say that person deserves to be punished. He was himself damaged.”

“What do you do with disorders? You’ve got to try and put them right,” he added. “If I — as a normal being — choose to break the law, knowing that I’m breaking the law, then I think I need to be punished.”

Napier’s remarks provoked a wave of anger among victim’s rights groups and those critical of the Catholic Church’s response to its ongoing child sex abuse scandals.

South African political commentator Justica Malala also threw his opinion into the mix, calling the Archbishop the “loser of the week” on his television show, according to Reuters. 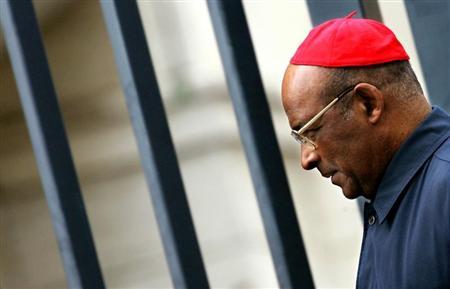 JOHANNESBURG (Reuters) – A South African cardinal who helped elect Pope Francis this week has told the BBC pedophilia is an illness and not a crime.

Cardinal Wilfrid Fox Napier, the Catholic Archbishop of Durban, told BBC Radio 5 on Saturday that pedophilia was a “disorder” that needed to be treated.

“From my experience, pedophilia is actually an illness. It’s not a criminal condition, it’s an illness,” he said.

Napier said he knew of at least two priests who became pedophiles after they were abused as children.

“Now don’t tell me that those people are criminally responsible like somebody who chooses to do something like that. I don’t think you can really take the position and say that person deserves to be punished. He was himself damaged.”

The Catholic Church has had its image deeply tarnished by a widespread child sex abuse scandal.

Napier was one of the 115 cardinals in the Vatican conclave that elected Pope Francis on Wednesday, the BBC reported.

The first non-European pope in nearly 1,300 years, Francis has signaled a sharp change of style from his predecessor, Benedict, for the 1.2-billion-member Church, which is beset by scandals, intrigue and strife.

He said on Saturday the church should be poor and remember that its mission is to serve the poor.