Catholic order to be overhauled after founder’s abuse 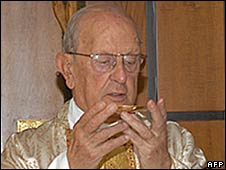 Father Maciel founded the order in 1941

Pope Benedict XVI is to appoint an envoy to overhaul a conservative Roman Catholic order whose Mexican founder abused young children over many years.

Marcial Maciel’s actions were “immoral” and the Legionaries of Christ order had to be “purified”, the Vatican said.

Maciel, who died in 2008, fathered a daughter with a mistress as well as sexually abusing many boys and young men over a period of 30 years.

He had enjoyed the support of the previous pope, John Paul II.

In 2006, Father Maciel was banned from exercising his ministry in public and told to retire to a life of prayer and penitence.

The priest – who founded the conservative order in 1941 – had always denied any wrongdoing. He died in January 2008 at the age of 87.

The Vatican statement came after the Pope met five bishops who investigated the order.

It said Fr Maciel had led a double life “devoid of scruples and authentic religious sentiment”.

“By pushing away and casting doubt upon all those who questioned his behaviour, and the false belief that he wasn’t doing harm to the good of the Legion, he created around him a defence mechanism that made him unassailable for a long period, making it difficult to know his true life,” the Vatican statement said.

VATICAN CITY — The Vatican denounced the “immoral” double life led by the late founder of the Legionaries of Christ on Saturday and said a papal envoy and special commission would be named to overhaul the conservative order following revelations its founder sexually abused seminarians and fathered at least one child.

In a statement, the Vatican excoriated the Rev. Marciel Maciel for creating a “system of power” built on silence and obedience that enabled him to lead a double life “devoid of scruples and authentic religious sentiment” and allowed him to abuse young boys for decades unchecked.”

By pushing away and casting doubt upon all those who questioned his behavior, and the false belief that he wasn’t doing harm to the good of the Legion, he created around him a defense mechanism that made him unassailable for a long period, making it difficult to know his true life,” the Vatican said.

The Vatican assured the Legion’s current members that it would help them “purify” what good remains in the order and would not be left alone as they undergo the “profound revision” necessary to carry on.

The Vatican issued the statement after Pope Benedict XVI met with five bishops who investigated the Legion for the past eight months, met with over 1,000 members around the world to determine its future after its founder was so thoroughly discredited.

The pope’s response is being closely watched because the Vatican is facing mounting pressure to aggressively confront abuse and provide pastoral care to victims. The Maciel case has long been seen as emblematic of Vatican inaction on abuse complaints, since Maciel’s victims had tried in the 1990s to bring a canonical trial against Maciel but were shut down by his supporters at the Vatican.

In the end, it was only in 2006 — a year into Pope Benedict XVI’s papacy — that the Vatican ordered Maciel to lead a “reserved life of penance and prayer,” making him a priest in name only.

The Vatican statement was remarkable in its tough denunciation of Maciel’s crimes and deception. It said the system of power, obedience and silence he created had kept “a large part” of the Legionaries in the dark about his double life. That raised questions about what would become of the current Legionaries leadership since many have questioned how they couldn’t have known of Maciel’s misdeeds.

The Vatican ordered an investigation in 2009 after the Legionaries acknowledged that Maciel, who died in 2008 at age 87, had fathered a daughter who is now in her 20s and lives in Spain. But it was only in March of this year that the Legionaries acknowledged that Maciel had also sexually abused seminarians and that two men are claiming to be his sons.

The late Pope John Paul II had long championed the Legionaries for their orthodoxy and ability to bring in vocations and money.