Montreal’s famed Saint Joseph’s Oratory says a priest who was stabbed during morning mass is expected to survive the attack.

In a tweet just before noon on Friday, the oratory said Father Claude Grou’s life is “not in danger” following the stabbing.

Montreal police say a 26-year-old suspect has been arrested. He was taken to the station for questioning.

Investigators said a call came in about a stabbing at the church at approximately 8:40 a.m. on Friday morning when the priest was in the process of celebrating mass before approximately 60 worshippers.

Shortly after the attack, the Diocese of Montreal identified the priest as Father Claude Grou, the rector of the church.

The mass was being livestreamed by the Catholic television network Sel+Lumiere TV, which airs the religious ceremony daily, when the stabbing occurred. The footage was quickly removed from the website following the attack.

In the video, a man wearing a dark winter coat and a light-coloured baseball cap pulled out a large knife and walked in front of the altar. The footage shows the suspect run up the steps towards the priest.

Grou attempted to run away as the attacker knocked over a candle. The video shows the man quickly catch up to the priest and push him to the ground before he appears to stab him.

Following the stabbing, the suspect dropped the knife and stood up as members of the congregation ran towards him. Three men restrained the attacker while other people went to help Grou who appeared to stand up on his own.

Lurie reported that the assailant slashed Grou in his stomach and the knife broke during the attack.

Adele Plamondon was attending mass that morning and told CTV Montreal that she saw the attacker walk towards the altar.

“I thought he was going to kneel to say a prayer in front of the Saint Joseph’s statue, but he quickly came up the stairs taking a big knife out of his side and I realized what his intentions were so I ran out of the church screaming to alert the security,” she recalled.

Witness Philip Barrett told The Canadian Press that he was sitting near the front of the church when he saw the suspect rise from a pew and approach the sanctuary during the mass.

“I do remember the priest was moving away from the man but it happened so quickly there was almost no time to react,” he recalled.

Barrett said the suspect didn’t speak or call out during the attack and he didn’t struggle once he was subdued.

The church’s security agents detained the man until police arrived. The suspect was arrested and taken to the station for questioning.

Paramedics treated the priest for minor injuries to his upper body at the scene. Plamondon said she spoke to Grou shortly after he was stabbed.

“I said Saint Joseph’s angels have protected you,” she said.

CTV News’ Vanessa Lee said onlookers told her that Grou was sitting up and talking before he was transported to hospital for further treatment.

In a tweet, the Roman Catholic Diocese of Montreal said the priest’s condition was “stable.”

“Everybody working here at the oratory and most of our pilgrims are shocked and very, very sad. As we speak, there’s mass going on in the basilica of the oratory and I’m sure everybody’s praying for him,” the oratory’s spokesperson Celine Barbeau said.

The spokesperson said they have no idea why this attack occurred.

“There’s so many reasons why this may have happened. We do not know why,” she said. “I don’t think it was directed directly to the man [Grou], but who can say?”

Despite the stabbing, Lee said the oratory will not be closed to the public on Friday. She said the lower church, where the attack occurred, remains closed for the police investigation.

According to its website, Saint Joseph’s Oratory is the largest shrine dedicated to Saint Joseph in the world and receives approximately two million visitors from around the world each year.

Lee said the officials at the oratory said they have a security team at the church at all times and reassured the public that it’s safe to visit.

Prime Minister Justin Trudeau described the attack as “horrible” in a tweet he shared Friday.

“What a horrible attack at Saint Joseph’s Oratory in Montreal this morning. Father Claude Grou, Canadians are thinking of you and wishing you a swift recovery,” he said.

Montreal Mayor Valerie Plante, too, expressed her reaction to the incident on Twitter.

“What a horrible and inexcusable gesture that has no place in Montreal. I am relieved to learn that the life of Father Claude Grou, Rector of the @osjmr, is out of danger and that his condition is stable. On behalf of all Montrealers, I wish him a speedy recovery.”

Liberal MP Rachel Bendayan, who represents the riding of Outremont, Que. where the church is located, said she was shocked by the news.

“My team is at the church offering all our support. Am on my way back to Outremont to be with you,” she tweeted.

With files from The Canadian Press

A man armed with a knife runs toward the altar at Saint Joseph’s Oratory during mass on Friday March 22, 2019.

Police in Montreal have arrested a man after a stabbing at Saint Joseph’s Oratory.

A priest at Montreal’s renowned Saint Joseph’s Oratory was stabbed in the chest Friday while delivering morning mass, shocking parishioners and those watching a live stream of the service from home.

The suspect was quickly wrestled to the floor by security guards after stabbing Father Claude Grou, rector of the oratory. The priest was taken away by ambulance with minor injuries to his upper body.

“I saw this man coming quickly and taking his knife out and going straight for Père Grou,” recounted Adèle Plamondon, who was just finishing the day’s reading when the man rose from the pew.

“It was obvious what his intentions were. So, I left screaming to alert the security.”

Afterward, she saw the man on the floor being restrained. The attack was captured on a live stream and television broadcast by the Catholic channel Salt + Light. 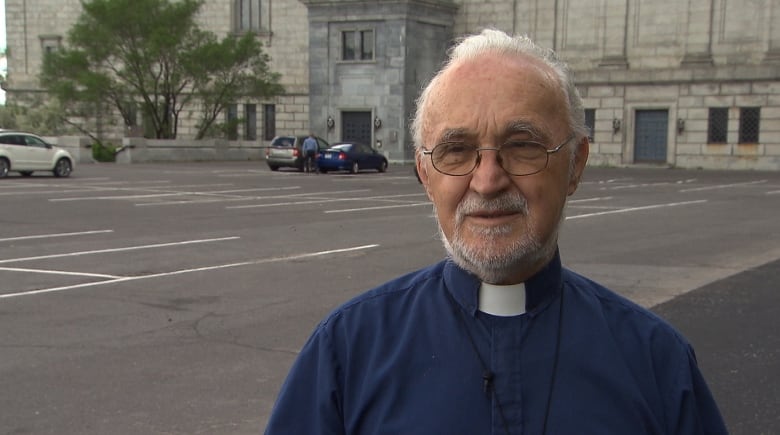 Father Claude Grou, seen here in an earlier interview, was about to proclaim the gospel to about 60 people gathered in the church when a man stood up from one of the pews, walked behind the altar and stabbed him twice, according to witnesses. (CBC)

She said she spoke to Grou before he was taken to hospital. He was slashed twice and was in shock but seemed to be OK otherwise, Plamondon said.

She said the priest’s wounds were superficial because the knife broke.

Philip Barrett, who was attending the mass along with about 60 people, said the priest was behind the altar, getting ready to proclaim the gospel, when a tall man stood up from one of the pews and started walking forward.

“He walked past the barrier leading into the sanctuary near the altar, and everyone was just initially wondering what was going on, and some people were starting to react a little bit,” he said.

“And he walked directly behind the altar and seemed to strike the priest.”

Both Plamondon and Barrett described the attacker as a tall, slim man who didn’t say anything. Both said they had not seen him at the church before.

WATCH | Parishioner describes what she saw during morning mass at St. Joseph’s Oratory:

A witness describes what she saw at morning mass on Friday. Father Claude Grou is in stable condition. 1:02

Priest transported to hospital by ambulance

A spokesperson for the first responder agency Urgences-santé, Benoit Garneau, said Grou was conscious while being transported to hospital.

The injury was to his chest, he said, but he could not say whether there was more than one stab wound. 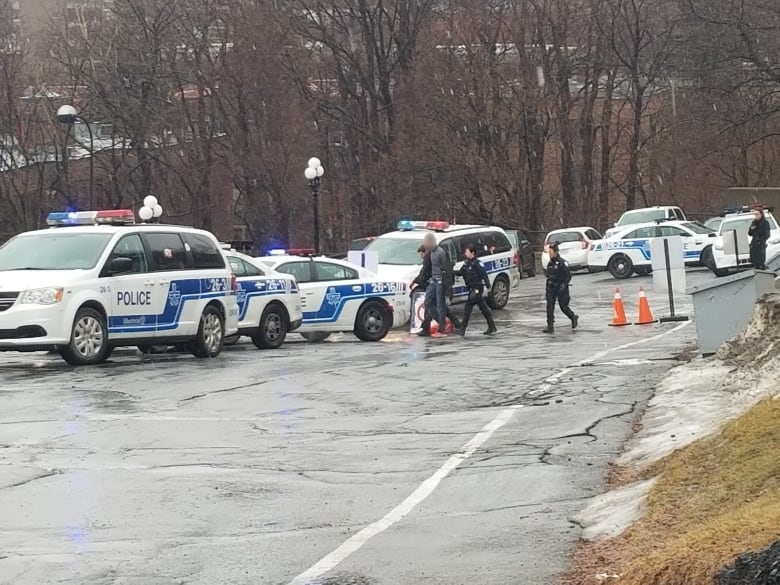 A 911 call was made at 8:40 a.m., and the suspected attacker was already being held by security when police arrived, said Montreal police spokesperson Const. Caroline Chèvrefils.

The man, who is 26, was taken into custody and will be interviewed by investigators later today, she said.

Police say he isn’t expected to be charged until Saturday at the earliest.

‘I wish him a speedy recovery,’ says mayor

The Montreal diocese issued a tweet saying the priest’s condition was stable and “all of our prayers are with him.”

“We are all shocked by this act of violence that has taken place in our city, in a space dedicated to peace,” Christian Lépine, Archbishop of Montreal, said in a statement.

“We know that places of worship of many religions are targets of acts of violence. We must continue to follow the path of peace and love, believing that good will overcome evil through prayer and good works.”

In a tweet, Prime Minister Justin Trudeau sent his best wishes to the priest.

“What a horrible attack at Saint Joseph’s Oratory in Montreal this morning. Father Claude Grou, Canadians are thinking of you and wishing you a swift recovery.”

Montreal Mayor Valérie Plante says this type of attack has no place in the city.

“I am relieved to learn that the life of Father Claude Grou, rector of the [Oratory], is out of danger and that his condition is stable,” she tweeted.

“On behalf of all Montrealers, I wish him speedy recovery.”

Architecturally, the oratory is the largest church in Canada. Its construction was complete in 1967 on Mount Royal and its dome, one of the largest in the world, can be seen from across Montreal.

Perched on the mountaintop, the oratory was founded by Saint Brother André and is now a pilgrimage site. 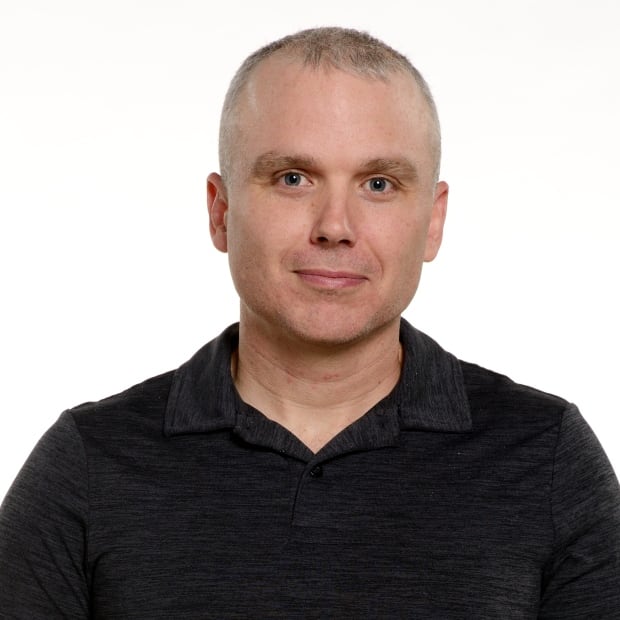 Isaac Olson is a journalist with CBC Montreal.

With files from Jay Turnbull and Kamila Hinkson