Residential school survivor and NDP MP Romeo Saganash told reporters the decision by Canadian bishops to defend not asking the Pope to issue a formal apology made him want to “go throw up.”

The continued refusal by Canadian bishops to ask Pope Francis to issue a formal apology for the abuses suffered by thousands of Indigenous Canadians under the residential school system drew fierce condemnation from parliamentarians and survivors of the schools.

In a press conference held Wednesday in a room one level beneath the House of Commons, where then-prime minister Stephen Harper made a historic apology in 2008 for the residential school system, members of the Canadian Conference of Catholic Bishops told reporters they had been wrong to report that Pope Francis would not issue an apology for the Catholic Church’s role in the residential school system.

However, the bishops repeatedly refused to provide any clear answers about why they had previously stated the Pope did not feel he could personally apologize for the systemic abuse perpetrated in the schools — or when any such apology might come.

That left survivors of the schools and parliamentarians frustrated.

“Already when the Pope announced he wouldn’t apologize, I was of course, as a survivor, very disappointed. After hearing what they said today, now I’m disgusted,” said Romeo Saganash, an NDP MP and residential school survivor.

“You probably noticed that I walked out because I wanted to go throw up in the bathroom.”

Richard Gagnon, Archbishop of Winnipeg and vice-president of the Canadian Conference of Catholic Bishops, said the Pope was waiting for the “opportune time” to make a trip to Canada.

He did not say whether any apology would come at that time, whether the organization would advise him to apologize, or why the Pope did not feel he could apologize for the actions carried out in the schools.

Despite being repeatedly pressed by reporters, Gagnon refused over the course of half an hour to provide any straight answers.

WATCH BELOW: Trudeau disappointed by Pope’s decision not to apologize for residential schools

The House of Commons voted on a motion Wednesday afternoon shortly after the press conference on whether to formally ask for a papal apology.

It did not pass by unanimous consent as one Conservative MP, Garnett Genuis, opposed the motion.

MPs will now debate the motion at a later date before holding a vote.

NDP MP Charlie Angus, who introduced the motion, blasted the assertion made by the bishops that the “decentralized” structure of the Catholic Church meant the Pope had no responsibility to apologize for residential schools, which the bishops said were run entirely by separate entities of the Church.

Angus said that claim was “ridiculous” and that the bishops were attempting “to engage in obfuscation of historic facts.”

“The time has come for the Catholic Church in Canada to join the road of reconciliation,” he said.

Senator Murray Sinclair, who served as commissioner of the Truth and Reconciliation Commission, also rejected the claim made by the bishops that it was separate entities, not the Catholic Church itself, that ran the schools.

“Everybody who worked for those entities was directed by the Church on what to do,” Sinclair said.

“They should feel shame, those who have made the decision to allow the Pope not to issue this apology.”

All three said the Canadian Conference of Catholic Bishops ought to directly call on Pope Francis to issue an apology.

While the former Pope made what has been described as an expression of sorrow during meetings with delegates from the Assembly of First Nations in 2009, that was not a formal apology.

The Catholic Church operated roughly two-thirds of the 130 residential schools that operated in Canada between the 1880s and 1996, when the last school closed.

More than 150,000 Indigenous children attended the schools where thousands later revealed they had been subject to emotional, physical and sexual abuse.

The other churches that operated the remainder of the residential schools have all issued apologies.

The Canadian Conference of Catholic Bishops says it’s incorrect to suggest that Pope Francis is refusing to apologize to survivors of Canada’s notoriously abusive residential schools.

The conference has sent a background paper to MPs and senators in a bid to clarify what it characterizes as “misunderstandings and factual errors” in media reports about the Pope’s decision not to personally apologize for the role played by the Roman Catholic Church in operating the schools.

The paper suggests that under the church’s decentralized structure, it’s not appropriate for the Pope to apologize, that it’s best left to Canadian bishops to pursue engagement and reconciliation with Indigenous Peoples.

A papal apology was one of 94 recommendations of the Truth and Reconciliation Commission.

Late last month, Bishop Lionel Gendron, president of the conference of bishops, issued a letter to Indigenous Peoples in Canada, indicating that “after carefully considering the request and extensive dialogue with the bishops of Canada, (the Pope) felt that he could not personally respond.”

That letter disappointed Indigenous leaders and Prime Minister Justin Trudeau, who had personally asked Pope Francis during a visit to the Vatican last year to consider an apology; it also prompted the NDP to propose a motion – supported by the governing Liberals and expected to be debated in the House of Commons this week – calling on the bishops to invite Pope Francis to come to Canada to apologize.

In the background paper sent this week, the conference of bishops says neither the Holy See nor the conference were involved in running the residential schools. But it says the 50 “autonomous” Roman Catholic entities that did operate schools have publicly apologized, both collectively and individually, and paid nearly $60-million in compensation and other payments under a 2006 settlement agreement.

Moreover, the paper notes that the conference of bishops has “on a number of occasions expressed regret and remorse at the involvement by various Catholics” in the schools.

As well, Pope Benedict met with a delegation of Indigenous leaders in 2009 “and expressed sorrow and regret for the abuses suffered” in the schools. At that time, the paper notes that Phil Fontaine, then national chief of the Assembly of First Nations, declared that the meeting with Pope Benedict “closes the circle of reconciliation.”

“To suggest that the Catholic community has not accepted responsibility for its involvement in residential schools is simply inaccurate. The Catholic Church has apologized in the way it is structured,” the paper says.

As for Pope Francis, the paper says he’s encouraging Canadian bishops to “continue taking leadership and assuming their proper role” in pursuing reconciliation and he “remains open to a future visit when it is opportune.”

“Sharing in the pain of Indigenous Peoples, he would certainly ensure such a visit includes meaningful encounters with them.”

Pope Benedict has said he is sorry for the physical and sexual abuse and “deplorable” conduct at Catholic church-run Canadian residential schools.

The Vatican says the pontiff expressed his sorrow and emphasized that “acts of abuse cannot be tolerated” at a meeting Wednesday with representatives of native Canadians.

“Given the sufferings that some indigenous children experienced in the Canadian residential school system, the Holy Father expressed his sorrow at the anguish caused by the deplorable conduct of some members of the church and he offered his sympathy and prayerful solidarity,” a statement from the Vatican said. 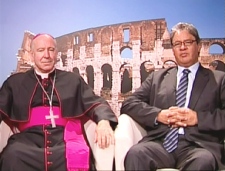 Archbishop Gerard Pettipas of the Canadian Conference of Catholic Bishops, who attended Wednesday’s meeting, says it was an important moment.

Until today, the Church as a whole had never apologized for the abuse that aboriginal students suffered at the hands of Catholic missionary congregations.

“What we’ve been trying to do is to bring about healing and reconciliation between the Church, the government of Canada and our First Nations people,” he told Canada AM shortly after the meeting.

“There was a feeling that despite the apologies that were offered by the oblates and some bishops, that the Catholic Church as a whole has not recognized the part that we played.

“As a gesture of reconciliation… it was important to hear from the one person who does speak for the Catholic Church around the world, to hear him say ‘I am sorry. I feel for what you people have suffered. We hope that we can turn the page and move toward a better future together.'”

Chief Edward John of the Tlazten First Nations says he hopes the apology will help “many people move forward.”

“We heard the prime minister’s apology a year ago in June. And today, to listen to the Holy Father explain his profound sorrow and sadness and to express that there was no room for this sort of abuse to take place in the residential schools, that is an emotional barrier that now has been lifted for many people,” he said.

Phil Fontaine, national chief of the Assembly of First Nations, said he appreciated the apology from the Church.

“I think His Holiness understands the pain that was endured by so many and I heard him say that it caused him great anguish,” said Fontaine, who attended the meetings, on Wednesday.

“I also heard His Holiness say that the abuse of the nature that was inflicted on us has no place in the Church, it’s intolerable and it caused him great anguish.”

“What I heard,” Fontaine added, “it gives me comfort.”

More than 150,000 native children were forced to attend the schools from the 19th century until the 1970s. It was part of an effort to remove them from the influence of their homes and culture and assimilate the children into Canadian society.

The Canadian government has admitted that physical and sexual abuse in the schools was rampant. Many students recall being beaten for speaking their native languages and losing touch with their parents.

Prime Minister Stephen Harper issued a formal apology in Parliament last year, calling the treatment of children at the schools a sad chapter in the country’s history. He said the policy of forced assimilation was wrong, caused great harm, and had no place in the country.

Canada has also offered compensation, as part of a lawsuit settlement between the government, churches and surviving students.