OTTAWA—A Conservative MP from Alberta has scuppered an attempt to have the House of Commons unanimously call on Pope Francis to apologize for the Catholic Church’s role in the abuses of Canada’s Indigenous residential school system.

Garnett Genuis, the representative for Sherwood Park—Fort Saskatchewan, loudly proclaimed from his desk in the House that he “absolutely” does not support an NDP motion to push for a papal apology. Genuis told reporters after the vote that he doesn’t believe Parliament should tell religious institutions what to do.

“I believe very much in religious freedom and the separation of church and state,” he said Wednesday. “It is quite unprecedented that Parliament would tell the Church how to undertake its (Indigenous) reconciliation efforts.”

Charlie Angus, the NDP MP who sponsored the motion, said he believes Parliament — as a partner that created the residential school system with various Christian denominations — has a responsibility to call on Pope Francis to apologize for the church’s involvement. He vowed to bring the motion back to the Commons for a debate, instead of asking MPs to unanimously support it.

Every party except the Conservatives has said it supports the motion as it is currently written, although Conservative Leader Andrew Scheer has said he thinks any institutions involved in the schools should apologize.

“The obligation of Parliament to address this issue remains,” Angus said. “We will be laying out the case very clearly about the church’s complicity and role and obligation, and it will come to a standing vote.”

More than 150,000 Indigenous children attended residential schools from the late 19th century until the last one closed in 1996. In 2015, after years of study, the Truth and Reconciliation Commission (TRC) described how children were forced from their families and home communities to attend the church-run schools, where they were indoctrinated into new languages, religions and ways of life. This amounted to “cultural genocide,” the TRC concluded.

The TRC also issued 94 “calls to action,” including a request for the pope to come to Canada within a year to apologize for the “church’s role in the spiritual, cultural, emotional, physical, and sexual abuse” of Indigenous children in the Catholic-run schools.

Prime Minister Justin Trudeau also asked Pope Francis to apologize during a meeting at the Vatican in May 2017.

Before Wednesday’s request for unanimous consent in the House of Commons, two bishops from the Canadian Conference of Catholic Bishops (CCCB) spoke to reporters and defended the pope’s decision — announced last month — not to “personally respond” to the TRC’s call for an apology.

“The pope never said he wouldn’t apologize. He said he wouldn’t personally respond” to the TRC’s specific call for an apology, said Richard Gagnon, Archbishop of Winnipeg and vice-president of the CCCB.

Pressed repeatedly by reporters whether that means the pope will eventually apologize, CCCB president Lionel Gendron said Pope Francis is the only one who can “give answer to that.”

At the same time, Gagnon argued there’s a “misconception” that the Church has never apologized for its role in running the schools. The CCCB points to an apology from Canadian bishops in 1991 and a statement from Pope Benedict XVI in 2009, who “expressed sorrow at the anguish” caused in the schools by “some members of the church,” according to a Vatican release at the time.

NDP MP Romeo Saganash, who is Cree from northern Quebec and attended residential school as a child, said he had to leave the room as the bishops spoke because he felt like he was going to throw up.

“When the pope announced that he wouldn’t apologize, I was of course, as a survivor, very disappointed. And after hearing what they said today, now I’m disgusted,” Saganash said.

Evelyn Korkmaz, who attended the notorious St. Anne’s school near Fort Albany — where children were shocked in an electric chair and reported being forced to eat their own vomit — said an apology from the pope would help students who were abused try to move on. 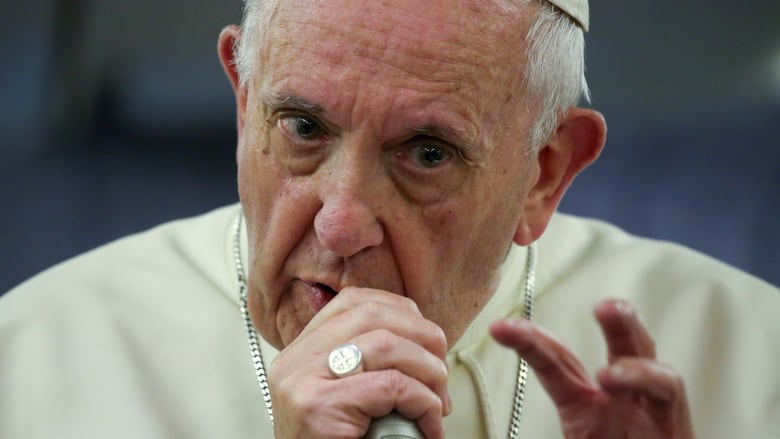 A motion to call on Pope Francis to come to Canada and apologize for residential schools was tabled in the House of Commons on Wednesday. (Alessandro Bianchi/Reuters)

A lone Conservative MP’s voice of dissent scuttled the quick adoption of a motion in the House of Commons Wednesday calling on Pope Francis to apologize for residential schools.

The NDP motion was opposed by Conservative MP Garnett Genuis whose voice broke the unanimous consent needed to adopt the motion. It will now go to debate and a standing vote.

Genuis, who represents the Alberta riding of Sherwood Park-Fort Saskatchewan, had telegraphed his position in a tweet posted about two hours before the motion was read out in the House of Commons.

“I believe very much in religious freedom and in the importance of separation of church and state,” Genuis told reporters after voicing his dissent.

“I think that most of the questions around the appropriate formula for an apology, about the way the church should approach it, are questions for the church.”

The motion, which was supported by the Liberals, calls on the Canadian Conference of Catholic Bishops (CCCB) to “invite Pope Francis to Canada” and apologize to residential school survivors on behalf of the Catholic Church.

The motion also calls on the church to turn over all its residential school documents and pay the remaining amount of funds it initially promised to raise for survivors before it was let off the hook by Ottawa.

The motion was drafted in response to word that the Pope “could not personally respond” to the Truth and Reconciliation Commission’s Call to Action 58, which requests the Pope come to Canada to make an apology to residential school survivors.

The Pope came to that decision after “extensive dialogue” with Canadian bishops, according to a letter released by the CCCB.

Conservative MP Cathy McLeod, the party’s Indigenous issues critic, said she planned to support the motion, but the party let its members follow their conscience on the issue.

“There’s some people, I think rightfully, that believe Parliament has no role in directing religious organizations in terms of what they should be doing,” said McLeod.

“They feel that this particular motion crosses that boundary in terms of the separation of government and … religious organizations.” 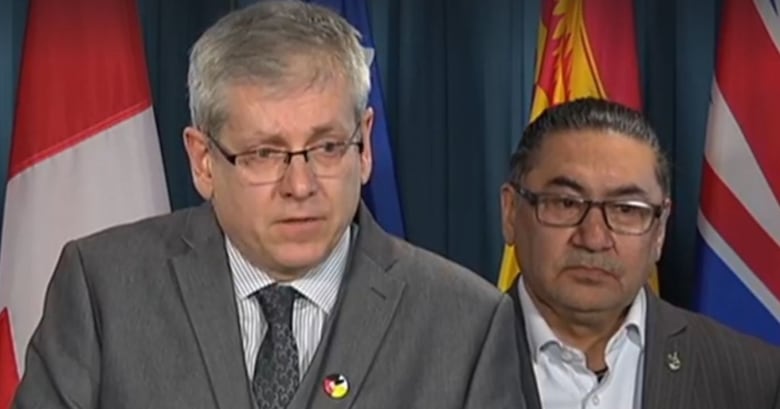 NDP MPs Charlie Angus and Romeo Saganash are behind the parliamentary motion to call for an apology from the Pope for residential schools. (CBC)

NDP MP Charlie Angus, who co-authored the motion with NDP MP Romeo Saganash, said he was let down but not surprised by Genuis’s actions.

“This is a tactic of the Catholic bishops working with Conservative Leader Andrew Scheer to block progress,” said Angus.

“It’s just a roadblock. It’s going forward and it’s going to a vote.”

Angus said it would now be up to the House leaders of each party to decide when to bring the motion back for debate and a vote.

The CCCB claims the motion is driven by “misinformation and misunderstanding.”

Saint-Jean-Longueuil Bishop Lionel Gendron, president of the CCCB, and Winnipeg Archbishop Richard Gagnon, vice-president of the group, held a news conference on Parliament Hill before the motion was tabled.

They argued that Pope Francis’s decision not to respond to the TRC’s request for an apology did not preclude some unspecified but related action from the Pope should he ever come to Canada and meet with Indigenous peoples.

Gagnon said the Pope felt the TRC’s call to action requesting the apology, which included a one-year timeline for a response, had “rather strict confines.” Gagnon said he couldn’t speculate on what the Pope would say should he ever come to Canada, but that he has “a place in his heart for Indigenous peoples” as his track record shows.

“He is open to considering coming to Canada,” said Gagnon.

“He is giving deep thought to this.”

‘They should feel shame’

Saganash, a residential school survivor, said he felt like vomiting listening to the CCCB news conference and had to walk out. He said he and his siblings attended four different residential schools, some thousands of kilometres away from his home in Waswanipi, Que.

Sen. Murray Sinclair, who was the chair of the TRC, said the Catholic Church continues to try to avoid accountability through a decentralized structure.

“We know those entities were created for the express purpose of protecting the central assets of the church,” said Sinclair.

“They should feel shame.”

Evelyn Korkmaz attended the Catholic-run St. Anne’s residential school in Fort Albany, Ont., from 1969 to 1972. Following an Ontario Provincial Police investigation in the 1990s, a total of five people, including two nuns, were convicted of crimes committed at that school.

“I would accept an apology today, tomorrow, two years from now,” she said.

“An apology to me is an acknowledgement of the abuse that was done to us as children. That is all we are asking for.”

Jorge Barrera is a Caracas-born, award-winning journalist who has worked across the country and internationally. He is currently working for the CBC Indigenous unit based out of Ottawa.