WARNING: This story contains graphic details that may be disturbing 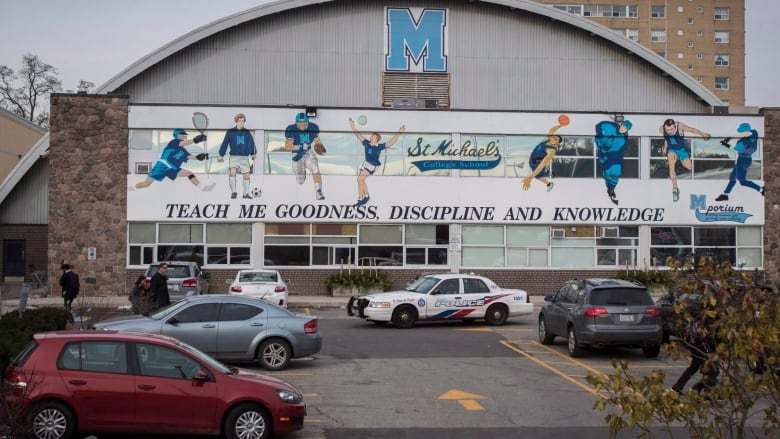 During two of those incidents, according to court documents, new students were held down by a crowd of players from the school’s football team and anally penetrated with a broom handle.

One of the teens has also pleaded guilty to a charge of distributing pornographic material.

Some of the assaults were filmed with a cellphone, according to an agreed statement of facts submitted in court Thursday.

The teens cannot be named under the Youth Criminal Justice Act.

A tentative sentencing date is set for Nov. 14.

Defence lawyer Rachel Lichtman, who represented one of the teens, told reporters after the court appearance that it was a “very difficult day for all parties involved.”

“What we heard in court was difficult to hear,” she said. “I think what we all need to realize is three very strong youths stepped up and took responsibility for their behaviour.”

She also said that there are “always two sides” in court cases like these and that the three teens who pleaded guilty have never faced criminal charges until now.

“They’re really good kids. They made mistakes, and they’re taking responsibility for those mistakes,” she said.

Police launched an investigation last fall after a video that captured a sexual assault on the school’s campus was shared on social media.

According to the agreed statement of facts, the first incident happened on Sept. 18, 2018, when St. Michael’s junior football team was in the locker room of the school’s basement.

One boy was changing his clothes at his locker when he was surrounded by several people and “picked up by the arms and legs and swung around,” the court documents said.

The group then put him on the floor and pulled down his football pants.

“People started yelling, ‘Get the broom!’ Then someone struck him hard on the buttocks with an object several times,” the agreed statement of facts said.

Things escalated on Oct. 17, 2018, when the same victim went to the locker room with the team to change.

He heard a “roar from his teammates,” then turned and saw a group of people approaching him.

“He tried to run. Someone tripped him, and he went down to the floor on his knees,” the court documents said.

His pants were then pulled down, and he was smacked on the buttocks before being held down and assaulted with the broom.

“The broom was shoved into his buttocks and anus several times,” the court documents said.

A third incident occurred on Nov. 7, 2018, after the team had won a championship football game.

That time, a second victim was held down on the locker room floor by a group of students who tore at his clothing, ripping his underwear apart, the documents say.

Again, the victim was anally penetrated with a broom handle, the agreed statement of facts said.

“All the while [the boy] struggled against them and yelled at him to stop.”

Defence lawyer Jeff Mazin, who represented another one of the teens, told reporters that in pleading guilty, his client spared the victims from having to testify about the assaults.

“Responsibility has been taken,” he said.

Overall, seven students were charged with assault and sexual assault offences that related to these incidents.

Four of the students charged were expelled and three withdrew from the school in the wake of the allegations.

Charges against one of those seven were withdrawn back in August after a prosecutor said a conviction was unlikely.

The cases against two other students also concluded that month, but Ontario’s Ministry of the Attorney General would not say what the outcomes of the cases against the teens were, citing restrictions under the Youth Criminal Justice Act.

One other teen’s charges are still making their way through the court system. A hearing has been scheduled for Oct. 17.

St. Michael’s is run by the Basilian Fathers with its roots dating back to the Congregation of St. Basil in France. The school’s principal and its board president resigned amid criticism of its handling of the case.

The investigation touched off a national discussion about bullying and hazing in Canadian schools. Many alumni came forward with their own stories of abuse at the Catholic school, while others spoke about their positive memories of the institution.

An independent committee set up to examine the culture at St. Michael’s found that bullying remained a “systemic” problem despite extensive measures taken by the school in the wake of the scandal. It also found that hazing was not a problem.

The committee issued a 123-page report in August that offered 36 recommendations, including developing a comprehensive strategy to address bullying and robust staff training to deal with the issue. The school promised to adopt all the recommendations.

Adam Carter is a Newfoundlander who now calls Toronto home. He enjoys a good story and playing loud music in dank bars. You can follow him on Twitter @AdamCarterCBC or drop him an email at adam.carter@cbc.ca.

With files from Ali Chiasson and The Canadian Press