A man who pretended to be a member of the Catholic clergy is facing new charges related to child exploitation after more victims came forward with information, say police who earlier this week announced details about the case.

The 33-year-old was first charged with the exploitation of two teenage boys after the Internet Child Exploitation (ICE) seized electronic devices containing child pornography images at a north Edmonton home on July 27, said police on Tuesday.

The investigation was launched after the mother of one of the boys alerted police to sexually graphic messages exchanged online for several months, police said at the news conference. The relationship with the boy later became sexual, police said, adding that offences related to a second boy were committed online.

“We would continue to encourage anyone with any information, no matter how old it is, to contact their local police or Crime Stoppers,” said Det. Brian Cross of the ICE unit in the release. “Regardless of how much time has passed, that information is still very important to our investigation.”

The accused, who moved to Edmonton earlier this year from Langley, B.C., has no affiliation with the Catholic Archdiocese of Edmonton or any other diocese, police said.

“As with the previous cases, ICE has no evidence in these new cases to suggest victims were lured while Coulombe was posing as a Catholic priest,” the release continued.

Justin Georges Stephen Coulombe was initially charged with two counts of luring to commit the making of child pornography, luring to commit an offence against a child, sexual interference, invitation to sexual touching, sexual assault, possession of child pornography and extortion. New charges include four counts of sexual interference and one count of invitation to sexual touching.

He is to appear in court for a bail hearing next week. 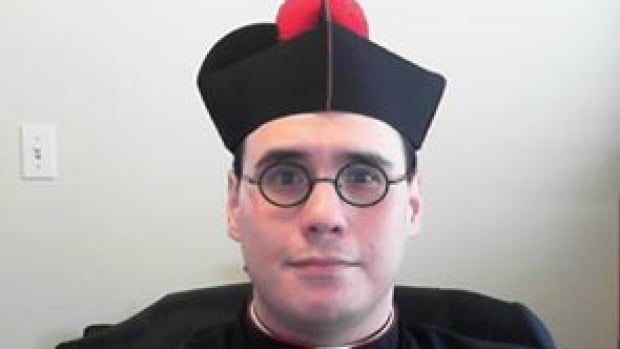 Justin Georges Stephen Coulombe, of Edmonton, pictured here in an undated photograph, was initially arrested by police on July 27. (Facebook)

Both cases are historical and involve underage boys from the Edmonton area.

An Edmonton man who poses as a Catholic clergyman was rearrested Thursday after two more people accused him of sex crimes.

Coulombe was originally arrested last Thursday and charged with several child exploitation offences involving two boys, also from the Edmonton area, under the age of 16.

Those charges are based on incidents that took place in 2017, after Coulombe moved to Edmonton from Langley, B.C., in January.

As in the initial two cases, there is no evidence that Coulombe lured his alleged victims in the new cases while posing as a Catholic priest, Cross said.

“We would continue to encourage anyone with any information — no matter how old it is — to contact their local police or Crime Stoppers,” Cross said in a news release Friday. “Regardless of how much time has passed, that information is still very important to our investigation.”

Coulombe will remain in custody until a new bail hearing, which is scheduled for next week.

ALERT was established to deal with serious and organized crime in the province.