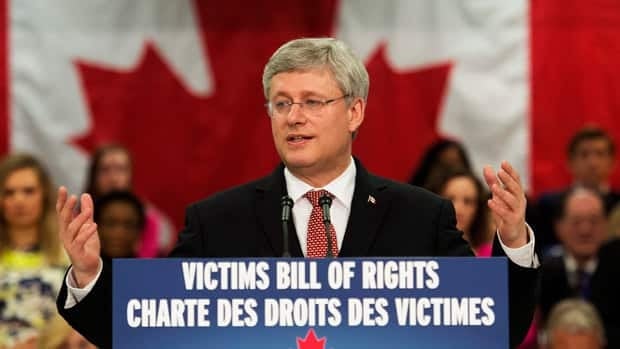 (Note: CBC does not endorse and is not responsible for the content of external links.)

Prime Minister Stephen Harper announced today in Mississauga, Ont., the details of a long-promised bill of rights for victims of crime that would force people to testify in court against a spouse.

Bill C-32, dubbed the Canadian victims bill of rights, was tabled in the House of Commons Thursday morning.

The legislation would change the Canada Evidence Act, which allows spouses to refuse to testify except in certain specific cases such as sexual assaults or crimes against youngsters.

‘I would worry for example that forcing women to testify against abusive spouses could not only dissuade them from reporting crime in the first place, but might put them at greater risk throughout that process’– Kasari Govender, West Coast Legal Education and Action Fund

The changes are part of a sweeping government bill that codifies the rights of victims, makes it easier for vulnerable witnesses to testify and requires that victims be given more information about cases.

For instance, victims can request a copy of a bail order, a probation order or the details of a conditional release.

The federal Conservatives have long complained that too much emphasis is placed on the rights of the accused, giving short shrift to the people affected by the crimes.

“Victims of crime and their families deserve to be treated with courtesy, compassion and respect,” says the preamble to Bill C-32, the Canadian Victims Bill of Rights.

It says victims have a right to be told when a criminal is deported or paroled and what parole restrictions may apply.

“It is important that victim’s rights be considered throughout the criminal justice system,” the preamble said.

Victims will also have the right to have the courts consider making a restitution order in all cases and to have such orders registered as a civil court judgment against the offender if the money isn’t paid.

A group working to advance the equality of women and girls in Canada, based out of Vancouver, is worried the new bill meant to protect victims of abuse could actually hurt them.

“I would worry for example that forcing women to testify against abusive spouses could not only dissuade them from reporting crime in the first place, but might put them at greater risk throughout that process,” said ​Kasari Govender, the executive director of the West Coast Legal Education and Action Fund, in an interview with CBC News.

Sheldon Kennedy, a former NHL player who brought to light the sex crimes of former junior hockey coach Graham James, was invited by the government to attend the announcement in Mississauga.

‘Victims deserve fair and equal treatment by the justice system and they need to be assured that the system itself doesn’t re-victimize’– Sheldon Kennedy, former NHL player

Kennedy said he spent the last 17 years trying to explain to society “the invisible damage” that occurs when a person is a victim of crime.

“Victims deserve fair and equal treatment by the justice system and they need to be assured that the system itself doesn’t re-victimize,” Kennedy said.

A Calgary centre for abuse victims was renamed the Sheldon Kennedy Child Advocacy Centre last May.

“Not only through my personal experience do I understand the life-changing impacts that being a victim of crime has had on myself and my family, but I’ve seen it first hand through the 917 cases that were handled in the last 11 months alone at the Sheldon Kennedy Child Advocacy Centre,” the former hockey player said.

Harper made the announcement in the company of Justice Minister Peter MacKay, Public Safety Minister Steven Blaney, Conservative MP for Mississauga South Stella Ambler and Senator Pierre-HuguesBoisvenu, whose daughter was murdered in 2002.

MacKay said the bill is the result of “an extensive” consultation process, in every province and territory, that began last summer.

“Your voice has been heard. And with this legislation a more compassionate and caring Canada will emerge,” MacKay said. 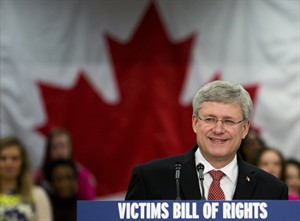 Prime Minister Stephen Harper announces the induction of legislation in Mississauga on Thursday, April 3, 2014 to create a Canadian Victims Bill of Rights. THE CANADIAN PRESS/Nathan Denette

MISSISSAUGA, Ont. – Crime victims would have more say as their cases wind their way through the justice system under a new Conservative government bill that veteran lawyers immediately denounced as crass politics.

The long-awaited legislation, part of the government’s ongoing law-and-order theme, aims to fix what Prime Minister Stephen Harper said Thursday was a broken part of the system.

“The rights of criminals have received far more attention than the rights of their victims,” Harper said at a seniors’ centre.

“Justice is not only for the accused; it is also for the victims.”

The proposed law — similar to one passed in Ontario almost 20 years ago — would ensure victims are given information about cases in which they are involved, such as a copy of a bail or probation order, or details of a criminal’s parole.

Other measures would mandate judges to take into account the safety of victims during bail proceedings, and the harm an accused has caused during sentencing.

Several defence lawyers branded the legislation as a calculated political ploy that victims of crime had fallen for.

“The (bill) is an example of a community that has sold itself to the Conservatives for a mess of porridge,” said Clayton Ruby.

“They need rehabilitative programs and services, and compensation from the government, and they’ve dropped all those expensive demands in favour of shallow symbolism.”

Other measures include a standardized victim-impact form that could also be used by review boards deciding what should happen to someone found not criminally responsible by reason of a mental disorder.

Another section would give victims the right to ask a court to consider ordering restitution for offences where financial losses are easy to calculate.

Frank Addario, another Toronto-based criminal lawyer, said the Conservative government’s agenda is to position itself as tough on crime, even though it knows its measures have little real-world effect.

“We did not need a new law for government to tell itself that it should communicate with victims about criminal cases.”

Several victims rights advocates were on hand for the announcement, including former pro-hockey player Sheldon Kennedy, who was sexually abused by his minor-league coach.

“I’m not naive to think that we’re going to flip a switch and everything’s going to be better,” Kennedy said.

“But being able to have this announcement…is going to start the process of trying to be better at the way we handle victims, not only through the court process, but really understanding the damage that happens to victims.”

Some critics wondered who would pay for a new complaints mechanism that federal departments involved in the justice system would have to set up for those victims who feel their rights have been infringed.

The money, they said, would be better spent on victim services than on a whole new bureaucracy.

“I don’t think this bill was necessary because basically what’s needed is education and properly funded victim services across the country,” said Bill Trudell, chairman of the Canadian Council of Criminal Defence Lawyers.

Harper made no mention of a proposed change to the Canada Evidence Act — contained in a few paragraphs in the 68-page bill — that would give prosecutors free hand to force spouses to testify against each other.

The lawyers said they did not expect the measure would have much impact given that spousal testimony comes into play in relatively few cases, and compelled evidence may be unreliable anyway.

Harper did say he was aware of widespread concern that giving victims more rights could bog down an already overloaded criminal justice system but said the legislation avoided that pitfall by not creating “victims as litigants.”