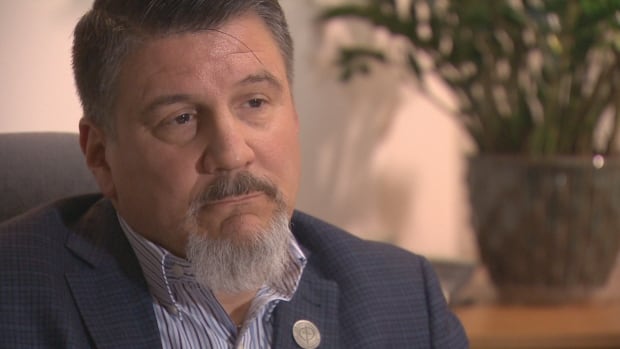 Police chiefs in New Brunswick were applauded by the provincial government when they announced plans to review unfounded sexual assault cases.

But behind the scenes, the government was fighting the province’s independent police oversight body to control how the chiefs of nine municipal police forces approached their review, CBC News has learned.

At the heart of the battle were questions over who should be responsible for keeping police forces in New Brunswick accountable.

Despite objections from the New Brunswick Police Commission, the oversight body that decided a review was necessary, the government stepped in and set the criteria for it.

Earlier this year, a Globe and Mail investigation found that police across the country routinely dismiss sexual assault complaints as unfounded, meaning a crime never happened or was never attempted. 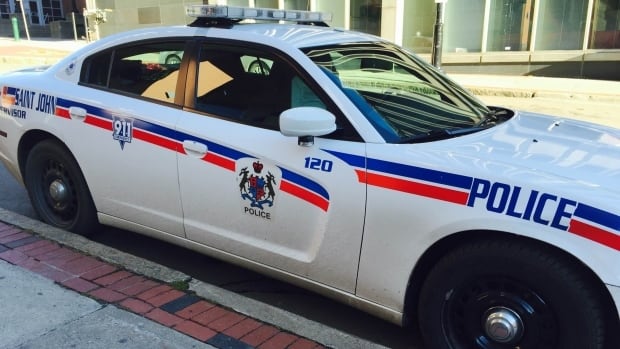 The Globe & Mail found that Saint John police had an unfounded rate of 51 per cent. (CBC)

“Why did government decide to treat this so narrowly?”

Advocates like Sunny Marriner, the executive director of the Ottawa Rape Crisis Centre, saw the Globe and Mail investigation as a chance for police services to take a deep look at how sexual violence is investigated.

Instead, some police forces, including many in New Brunswick, announced internal reviews that look into the past, and whether their statistics match the newspaper report, rather than the future and how police respond to complaints of sexual assault.

“I’m not sure how internal reviews that are backward-looking assist us in moving forward to deliver better sexual assault investigations for survivors,” Marriner said. 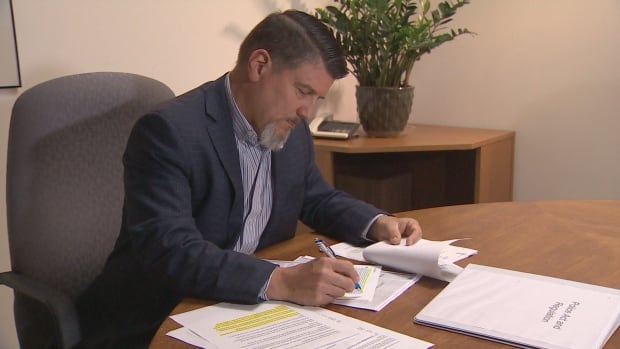 Steve Roberge says the New Brunswick Police Commission will get involved with sexual assault reviews again, if the commission still has concerns about how police in the province handle sexual violence. (CBC)

The Department of Justice and Public Safety says a more detailed review may be necessary in the future, depending on how police perform on the first one.

“In the end, the provincial government, the police commission and all stakeholders have the same goal: to make the system work better for anyone reporting a sexual crime,” spokeswoman Elaine Bell wrote in an email.

But Bell didn’t explain why government didn’t want the police commission to lead the review.

‘Make us all look bad’

CBC News filed access to information requests to every police force in New Brunswick and the New Brunswick Police Commission. All but the Saint John Police Force provided a full response.

Those documents detail the fight for control of the review.

Some police chiefs questioned the Globe and Mail’s findings. 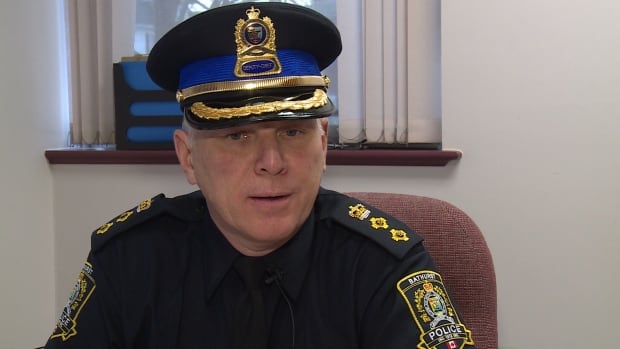 “Stating that police are not believing … victims is not true and make us all look bad,” Bathurst Chief Ernie Boudreau wrote in an email to New Brunswick Police Commission executive director Steve Roberge.

The police commission was concerned and suggested that chiefs get to the bottom of New Brunswick’s high unfounded rate.

After police chiefs agreed to a review, Roberge worked with the Fredericton Sexual Assault Centre to come up with criteria.

In an email, Jenn Richard, the centre’s director of community development, told Roberge the Globe and Mail story “validates the experience of many who have tried to report their sexual assault to police and did not receive a positive outcome.” (Richard declined an interview request for this story.)

Richard suggested the review go beyond unfounded cases, looking at things like how soon statements are taken from victims and if they’re warned against making frivolous and vexatious complaints.

Roberge drafted a letter to chiefs, asking them to examine all sexual violence cases since 2010, along with the criteria proposed by the Fredericton Sexual Assault Centre.

Before he could send the letter out, the government put the brakes on the police commission’s plans.

Mike Comeau, the department’s deputy minister who was then assistant deputy minister, told Roberge that it would be confusing if the commission announced a review, because Premier Brian Gallant wanted to make an announcement.

He also accused the commission of stretching its mandate in an “extraordinary and unprecedented” way.

“In short, this is not a situation in which there is evidence of any municipality or the province failing to discharge its responsibilities to provide adequate policing,” Comeau wrote to Roberge.

He also scolded Roberge for saying the Globe and Mail story exposed “significant flaws,” saying he “seems to have leapt to conclusions.”

“I would encourage the commission and its staff as a matter of general practice to avoid reaching conclusions prior to an investigation.”

One day later, government ordered police to review five years’ worth of unfounded cases. It’s not mandatory for police to look at the criteria suggested by the Fredericton Sexual Assault Centre, though some polices are going further than what’s required.

The chiefs were told to look at the unfounded cases with a checklist for such things as whether the complaint involved intimate partner violence, whether the case was forwarded to the Crown, and whether it involved a youth or an adult.

Roberge was “taken aback” by the government’s decision to take over the review.

He’s gotten legal advice that shows the commission alone has the power to ensure adequate policing.

While the dispute was playing out behind closed doors, Coon was frustrated that his questions about unfounded sexual assault cases were going unanswered.

“There’s something behind the curtain I feel that is leading everyone from the premier to the minister to the department to say we need to keep a lid on this,” Coon said.

“Well, what’s under the lid? That’s what we need to find out.” 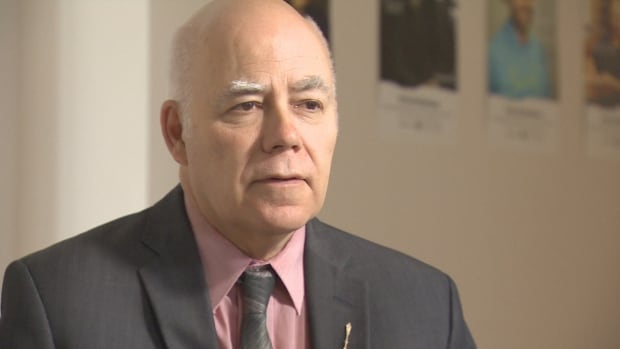 The Globe and Mail investigation, he said, “should have been the catalyst for a broader look” at how sexual assault is treated in the province’s justice system.

“I don’t understand why they wouldn’t have taken the offer of the police commission to take this on,” Coon said.

Even though it won’t oversee the review, the police commission plans to examine each police force’s findings.

If the results aren’t good enough, Roberge promises the commission will get involved again.

“It’s also very important for the public to understand that anyone out there who has had a sexual assault investigation conducted and wasn’t satisfied with the results, the commission is available to re-examine those investigations,” he said.

Do you have a tip about this story? Please click here to get in touch.

Will the police believe you?

In Canada, police dismiss 1 out of every 5 sexual-assault reports as unfounded – meaning police believe the crime didn’t happen

When Canadian police officers complete an investigation, they give it a closure code to show the outcome. One of those codes is “unfounded.” “Unfounded” indicates the investigating officer does not believe a crime was attempted or occurred. Once an allegation is categorized that way, it effectively disappears from public record. Considered baseless, the case isn’t reported to Statistics Canada, which has implications for police and victim-services funding.

The Globe sent nearly 250 freedom of information requests to 178 police services to obtain confidential unfounded data from 1,119 police jurisdictions across the country. We received responses from 873 jurisdictions, which represent 92 per cent of the Canadian population.

Our investigation has shown that sexual-assault cases are nearly twice as likely as physical assault to be designated unfounded. (The Globe found that only 11 per cent of physical assaults were coded as unfounded.) The number is also significantly higher than the false-reporting rate, which studies have shown to be somewhere between 2 and 8 per cent.

And while, on average, 1 in 5 sexual-assault allegations is deemed unfounded, The Globe found that the statistics varied wildly from town to town, city to city and province to province. Even separate police services located in the same geographic area recorded starkly different unfounded rates. In total, police in 115 communities dismissed at least one-third of sex-assault complaints as unfounded.

Experts say these high figures and large variations are evidence of a broken system. One of the most obvious patterns in the unfounded data was that West Coast police services, whether they were RCMP detachments or independent municipal services, tended to have below-average rates.

There are a few unique factors at play in British Columbia. For one, the most in-depth review of police unfounded files looked at 2002-2003 files from four B.C. police services, so experts say it’s possible the increased scrutiny has had an impact elsewhere. For another, B.C. is one of only a few Canadian jurisdictions where the Crown, not the police, decides whether to lay charges.In addition, B.C. has the highest legal test to bring a case to court. The Crown needs to show a “substantial likelihood of conviction,” rather than a “reasonable likelihood” or “reasonable prospect” of conviction, which is the standard elsewhere in the country. This higher bar could mean police officers are more careful with how they treat cases, experts told The Globe. The other clear picture to emerge from the data was that Southern and rural Ontario unfounded rates were much higher than the national rate. Many of these communities are policed by the Ontario Provincial Police. The OPP’s unfounded rate was 34 per cent.

By province and territory

Although there were examples of both high and low sexual-assault unfounded rates in nearly every region of the country, on average, Canada’s smallest regions – located in the North and the Maritime provinces – typically had the highest unfounded rates among the provinces and territories. Just as unfounded rates fluctuated significantly between jurisdictions, the range among Canada’s provinces was equally dramatic, from 11 per cent to 32 per cent.

Just as there were wide differences between the country’s provinces and territories, unfounded rates ranged significantly among Canada’s police services. The Globe received data from 125 independent municipal services. Three provinces have their own provincial force, the Sûreté du Québec, The Royal Newfoundland Constabulary and the Ontario Provincial Police. In addition, the Royal Canadian Mounted Police are responsible for rural and urban communities across the country. The correlation between more female officers and lower unfounded rates

In Ontario, 83 per cent of communities had fewer female officers than average.

The highest and lowest rates across the country

Canadian communities with fewer than 100,000 residents tended to have higher-than-average unfounded rates. Beyond that, the larger the city, the lower the numbers. Experts have speculated that this could be because smaller jurisdictions have fewer resources, such as a dedicated specialized sex-assault unit, and that these areas may also have less media scrutiny. What’s the unfounded rate where you live?

Curious what the unfounded rate is in your hometown? Enter your community name or police service in the field above. You’ll also find information about your jurisdiction’s sexual-assault charge rate and assault unfounded rate.

If you notice an error, please send an email to datafeedback@globeandmail.com