“Death of The Most Reverend John M. Sherlock Bishop Emeritus of the Diocese of London” & related articles

Ottawa – The Most Reverend John M. Sherlock, Bishop Emeritus of the Diocese of London, died on 12 August 2019.

Bishop Sherlock was born on 20 January 1926 in Regina, Saskatchewan. He entered St. Augustine’s Seminary in Toronto in 1946 to begin his theological studies and was ordained to the priesthood on 3 June 1950 for the Diocese of Hamilton by the Most Reverend R.H. Dignan, Bishop of Sault Ste. Marie. Following his ordination, he continued his studies and received a Licentiate in Canon Law from the Catholic University of America in 1952. He later received a Doctor of Laws (honoris causa) from the University of Windsor (1985), a Doctor of Divinity (honoris causa) from Huron College, London, Ontario (1986), and became a Fellow (honoris causa) of the University of St. Michael’s College, Toronto (1994).

Upon completion of his Licentiate in Canon Law, Bishop Sherlock returned to the Diocese of Hamilton to begin his pastoral ministry. He served as Assistant Pastor and then Pastor in parishes within the diocese from 1952 until 1974. During this time, he also held the positions of Lecturer in Religious Studies and Newman Chaplain at McMaster University in Hamilton, Advocate and Judge for the Regional Matrimonial Tribunal, Trustee and Chairman for the Hamilton-Wentworth Separate School Board, Consultor for the Diocese of Hamilton, and Board member and Vice-Chairman for St. Joseph’s Hospital (Hamilton). On 25 June 1974, he was appointed Auxiliary Bishop of the Diocese of London and was ordained Bishop on 28 August 1974 by Bishop P.F. Reding. On 8 July 1978, he was appointed Bishop of the Diocese of London and installed on 21 August.

As a member of the Canadian Conference of Catholic Bishops (CCCB), Bishop Sherlock was a member of the then Commission for Christian Education (English Sector), the then Pastoral Team for Study and Action, the then Administrative Board (now the Permanent Council), the then Commission for Social Affairs, the then Operations Review Committee, the then Ad hoc Committee on Constitution, as well as the then Commission for Social Communications (English Sector). From 1983 to 1985, Bishop Sherlock served as the President of the CCCB during which time he led the Conference in its organization of the Papal Visit to Canada by Pope Saint John Paul II in 1984. Bishop Sherlock went on to represent the CCCB with the Canadian Council of Churches (1989-1991) and served as the Council’s Vice-President in 1990-1991. Founded by the CCCB, Bishop Sherlock was the first Chairman of the National Catholic Broadcasting Foundation (later renamed the National Catholic Broadcasting Council), which, in 1998, led to the Daily TV Mass broadcast, originally on Vision TV, as a way of helping the Church to be more present and visible in the media. He retired as Bishop of London in 2002. 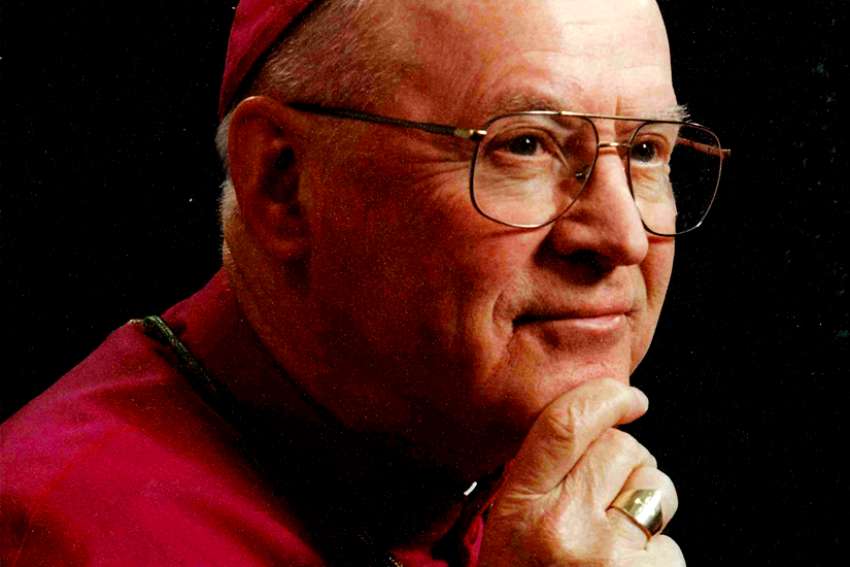 Photo courtesy of the Diocese of London.

Bishop Sherlock was the ninth bishop of the Diocese of London and its longest serving bishop. He was installed as bishop in 1978 and served until his retirement in 2002. For the previous four years he had served as auxiliary bishop to Bishop Gerald Emmett Carter before the latter moved on to Toronto.

“Bishop Sherlock was a true pastor who was close to his priests and his people,” said Bishop Ronald Fabbro, who succeeded Bishop Sherlock. “In his episcopal ministry over the past 45 years, he gave his life in service of our diocese and the wider Church in Canada. We will miss him, and we pray for him that he will rest in peace.”

Born in Regina, Sask., in 1926, and raised in Brantford, Ont., he was the second eldest of six sons and two daughters. Three of the boys would go on to the priesthood. He was ordained a priest in 1950 for the Diocese of Hamilton and began graduate work in canon law, completing his licentiate in 1952. He began parochial work in Hamilton and later Dundas. He became pastor at St. Charles Garner Parish and was heavily involved in the diocese’s tribunal, the Newman chaplaincy and cooperative housing. He also taught Sacred Scripture at McMaster University and worked closely with school and hospital boards.

Bishop Sherlock was involved in the social issues of his time, according to a biography on the diocese’s website, and was outspoken on issues ranging from the economy, abortion, unemployment, education and poverty in the Third World.

During his time in London Bishop Sherlock launched the Pentecost 2000 campaign in 1989 which was essential to the restoration of London’s St. Peter’s Seminary. It raised more than $21 million and has left a lasting endowment for the seminary as well as vital funding to establish youth ministry, refugee, liturgy and justice offices in the diocese.

Bishop Sherlock was president of the Canadian Conference of Catholic Bishops from 1983-85 and was tasked with organizing the papal visit of Pope John Paul II to Canada in 1984. He accompanied the future saint on his cross-Canada tour and a close friendship developed between the two men.

He retired in April 2002 and remained in London, which he now considered home, and remained active in teaching, helping at parishes, conducting retreats and parish missions and participating in diocesan celebrations.

On Monday, August 12, 2019, the Most Reverend John Michael Sherlock, DD, ninth Bishop of London, entered eternal life at the age of 93.

Bishop John Sherlock was born in 1926, ordained to the priesthood in 1950, ordained to the episcopacy in 1974, and installed as the ninth Bishop of the Diocese of London in 1978.  When he became a Bishop, he chose Omnia et in omnibus Christus as his episcopal motto: “There is only Christ: he is everything and he is in everything” (Col. 3: 11).  These words guided him throughout his episcopacy and until his last hour.

Bishop Sherlock was a deeply spiritual man with a keen intelligence, a natural ability to lead, and a joyful sense of humour.  A tireless and forward-thinking Bishop, he made important contributions in Catholic education, health care, social justice, pastoral care, and the implementation of changes resulting from the Second Vatican Council.  His influence reached across not only the Diocese but across Ontario and Canada.  Among his many accomplishments was his organizing the 1984 papal visit to Canada, which led to a long-lasting friendship with Pope Saint John Paul II.  Bishop Sherlock retired in 2002.

Bishop Sherlock was preceded in death by his parents Joseph and Catherine (O’Brien), his siblings Fr. William, James, Fr. Phillip, and Mary (William) Dool. He is survived by his siblings Gerald (Bernice), Eleanor (Edward) Monahan, Allan (Anne-Marie), and Catherine Sherlock, along with many nephews and nieces, and great-nieces and –nephews.

Editor’s note: An earlier version of this story read that Sherlock’s brothers Philip and James were also priests, this has been corrected to Philip and William.

The Diocese of London says retired Bishop John Sherlock passed away on Monday at the age of 93.

A visitation will be held Thursday at St. Peter’s Cathedral Basilica in downtown London from 1 p.m. to 9 p.m. and on Friday morning from 9 a.m. to 11 a.m. A funeral mass will be held at the basilica at 11 a.m. Friday.

“Bishop Sherlock was a true pastor who was close to his priests and his people,” wrote current Bishop Rev. Ronald P. Fabbro.

“In his episcopal ministry over the past 45 years, he gave his life in service of our diocese and the wider Church in Canada. We will miss him, and we pray for him that he will rest in peace.”

He was born in Regina, Sask., on Jan. 20, 1926, and “grew up in Brantford, Ontario with his parents, two sisters, and five brothers,” according to the diocese. He entered St. Augustine’s Seminary in Toronto after high school and was ordained to the priesthood on June 3, 1950. Two of his brothers, Philip and William, were also ordained as priests.

Sherlock worked in parishes in Hamilton and Dundas before becoming pastor of St. Charles Garnier Parish in Hamilton and teaching sacred scripture at McMaster University and working with school and hospital boards.

In 1974, he was named auxiliary to London’s Bishop G. Emmett Carter and was “named the ninth Bishop of the Diocese of London and installed at St. Peter’s Cathedral Basilica on August 21, 1978.”

Described as a “tireless and forward-thinking Bishop,” Sherlock “made important contributions in Catholic education, health care, social justice, pastoral care, and the implementation of changes resulting from the Second Vatican Council.”

Sherlock was elected president of the Canadian Conference of Catholic Bishops in 1983 and was responsible for organizing the 1984 papal visit to Canada. Sherlock accompanied Pope Saint John Paul II during the cross-country visit and the two developed a lifelong friendship.

Sherlock also launched the PENTECOST 2000 capital campaign in 1989 which raised more than $21-million to provide a lasting endowment for St. Peter’s Seminary as well as funding to establish a Youth Ministry Office, Diocesan Refugee Office, Office of Liturgy, and Justice Office.

Sherlock retired in April 2002 but chose to stay in London and remain active by “teaching, conducting retreats and parish missions, helping at parishes on weekends, and participating in diocesan celebrations.” Up until late 2018, he continued to hear confessions and celebrate mass almost every Monday.