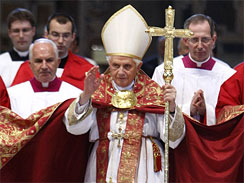 The future Pope Benedict XVI refused to defrock an American priest who confessed to molesting numerous children and even served prison time for it, simply because the cleric wouldn’t agree to the discipline. The case provides the latest evidence of how changes in church law under Pope John Paul II frustrated and hamstrung U.S. bishops struggling with an abuse crisis that would eventually explode.

Documents obtained by The Associated Press from court filings in the case of the late Rev. Alvin Campbell of Illinois show Cardinal Joseph Ratzinger, following church law at the time, turned down a bishop’s plea to remove the priest for no other reason than the abuser’s refusal to go along with it.

“The petition in question cannot be admitted in as much as it lacks the request of Father Campbell himself,” Ratzinger wrote in a July 3, 1989, letter to Bishop Daniel Ryan of the Diocese of Springfield, Illinois.

With the church still recovering from a notable departure of priests in the 1970s to marry, John Paul made it tougher to leave the priesthood after assuming the papacy in 1978, saying their vocation was a lifelong one. A consequence of that policy was that, as the priest sex abuse scandal arose in the U.S., bishops were no longer able to sidestep the lengthy church trial necessary for laicization.

New rules in 1980 removed bishops’ option of requesting laicizations of abusive priests without holding a church trial. Those rules were ultimately eased two decades later amid an explosion of abuse cases in the United States.

Campbell’s bishop had requested that he be quickly defrocked, in part to spare the victims the pain of a trial, but Ratzinger’s response was in keeping with church law at the time. Bishops retained the right to remove priests from ministry or to go through with a trial and recommend to Rome a cleric’s defrocking, and nothing prevented them from reporting such crimes to police as they should have done, the Vatican has argued.

“Nothing in the new code prevented a bishop from exercising his discretion to restrict ministry or to assign a priest to a job where he was out of contact with the public,” said Jeffrey Lena, the Vatican’s attorney in the U.S.

Campbell’s is one of several decades-old cases to emerge in recent months raising questions about Ratzinger’s decisions and the church law he was following involving abusive priests as head of the Catholic Church’s doctrinal watchdog office, a position he took in 1981. The round of scandals worldwide left the Vatican initially blaming the media and groups supporting abortion rights and gay marriage, but recently Benedict has denounced the “sin” that has infected the church.

John Paul’s views on laicizations were made known in a 1979 letter to priests, in which he wrote that their ordination was “forever imprinted on our souls” and that “the priesthood cannot be renounced.” Ryan, in his letter to Ratzinger, quoted Campbell saying essentially the same thing: “Once a priest, always a priest.”

“The whole idea was that the priesthood was so sacred you couldn’t kick these guys out,” said the Rev. Tom Doyle, a canon lawyer who reviewed the Campbell case and who has advocated for abuse victims. “It wasn’t that it wasn’t possible – it was possible – but the practice had been not to accept the petition unless the priest accepted.”

Campbell’s misdeeds date back at least 15 years before his defrocking.

As an Army chaplain, he was reprimanded and ultimately left the service after abusing at least one boy, according to military and church correspondence. An Army letter in his file said he had exploited his rank and position as a chaplain “by engaging in indecent homosexual acts” with a child under 16 who had been under his supervision.

Even so, Bishop Joseph McNicholas, then at the helm of the Springfield diocese, wrote to him, “Be assured that we will welcome you with open arms here at home.” While church officials overseeing clergy in the military were alerted of Campbell’s actions, and reference is made to the molestations in Ryan’s letter to Ratzinger, it’s not clear whether McNicholas knew.

Campbell became a pastor upon his return to the diocese. In at least three instances after returning to diocesan work, he was forced to depart jobs as parish pastor or administrator “for reasons of health,” a euphemism for sexual abuse used within the church that Ryan himself put in quotes.

After workers at a rape crisis center alerted authorities that they were treating one of Campbell’s victims, police found he had been plying boys with video games, bicycles, watches and other gifts to get them to the waterbed in his second-floor rectory bedroom. Ryan sent Campbell to a New Mexico treatment facility after the arrest.

Campbell was sentenced to 14 years in prison in 1985, after admitting to molesting seven boys during his time as pastor of St. Maurice Parish in Morrisonville, Illinois. He was released in 1992 after serving about seven years for sexual assault and sexual abuse.

Ryan apparently waited four years after Campbell went to prison, according to church files, before asking for the priest’s defrocking. It’s unclear what accounted for the delay.

In his 1989 letter to Ratzinger, Ryan outlined Campbell’s many offenses against children and asked for his laicization. He pointed out the local notoriety of the priest’s case and said his crimes and those of another abusive priest had already cost the diocese $1.5 million in damages and legal fees.

“I fear the infliction of further pain upon the victims of his criminal activity and their families,” Ryan wrote. “I fear that the diocese will suffer further pastorally and in public relations, to say nothing of greater financial damage.”

Ratzinger refused, citing Vatican policy, and told the bishop to proceed with a church tribunal.

It is unclear whether a church trial was ever held for Campbell. After his release from prison, he was cajoled by Ryan and his subordinates into accepting his defrocking. Three years after Ryan’s initial letter to Ratzinger, the bishop’s request to Rome was granted.

For bishops attempting to remove a child molester without a church trial or the priest’s cooperation in the 1980s, requests were rebuffed and sent back to diocesan tribunals where the cases could stagnate for years. While a full-fledged canonical trial could make sense given such a serious crime, bishops found them virtually inapplicable, in part because the statute of limitations very often had expired well before allegations had even been reported. Bishops’ hands, in some cases, were tied.

“In that case, it was tied by the universal law of the church,” said Monsignor Kenneth Lasch, a retired priest and canon lawyer who has advocated for abuse victims. “Rome would take the position at that time that unless he was convicted canonically, they wouldn’t laicize.”

Lena defended the church’s handling of cases, but said it has been improved with revisions.

“Is our criminal justice system broken because procedures are complex, or because they are designed to ensure that an innocent person is not wrongly convicted? Any mature criminal justice system – including the canonical system – has two duties: to punish the guilty and, of no less importance, to protect the innocent from mistaken prosecution. Sometimes, in a rush to judgment, people forget about the latter,” Lena said.

“And of course, legal systems can always be improved. I think the consensus is that the implementation of SST and the procedures developed in its wake improved the canonical system,” he said.

SST is short for “Sacramentorum Sanctitatis Tutela,” John Paul’s 2001 letter that, among other things, mandated all abuse cases would be overseen by the Congregation for the Doctrine of the Faith, Ratzinger’s office.

Kathie Sass, a spokeswoman for the Diocese of Springfield, said no one familiar with the intricacies of the Campbell case was still working in the tribunal and able to talk.

Sass said Ryan, who lives in a nursing home outside the diocese, was unable to respond to questions. He retired in 1999 under a cloud of accusations of sexual relationships with male prostitutes and at least one priest; his successor found that he had engaged in “improper sexual conduct,” allegations Ryan denied.

David Clohessy, director of the Survivors Network of those Abused by Priests, said that in Campbell’s case “and hundreds like it, Ratzinger chose to put concerns about dangerous pedophiles and the church’s reputation above concerns about children’s safety.”

Others believe the ultimate blame lay with John Paul, whose policies the cardinal was interpreting.

John Paul “certainly, I would say, is more culpable than Benedict,” said Lasch.

The Vatican previously accepted involuntary laicizations, but turbulence of the 1970s, in which the Catholic Church suffered a huge worldwide loss of priests, helped push John Paul to revise the policy and promulgate the 1983 Code of Canon Law, which emphasized more due process rights for priests and discouraged penal sanctions.

“It didn’t have any provisions in it for involuntary laicizations,” said Msgr. John Alesandro, a canon lawyer and professor at Catholic University. “But I think most canonists believed that whether it was in the Code of Canon Law or not, the pope could do it.”

John Paul did not, and as the abuse crisis exploded in the Catholic Church in the United States, bishops grew frustrated.

Alesandro sat on a Vatican-commissioned panel examining the policy, which ultimately was revised under “Sacramentorum Sanctitatis Tutela.” In 2003, new revisions gave bishops the right to ask the Vatican to laicize a priest through a speedier administrative procedure, or for the CDF itself to forward a defrocking case directly to the pope if the evidence is overwhelming.